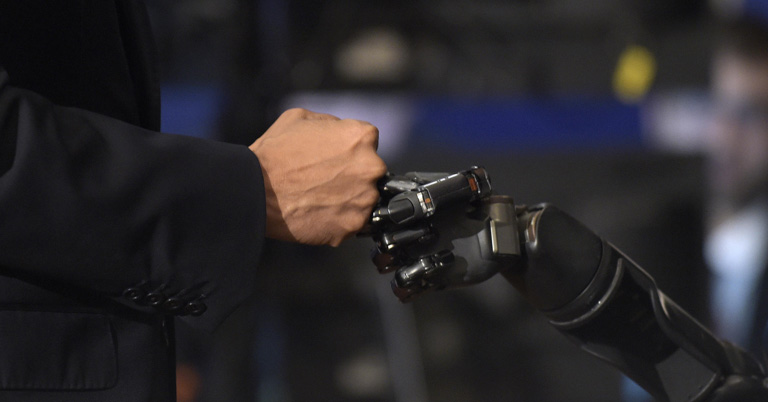 A while ago, we reported on the news of how neural implants helped a paralyzed patient to type at a normal rate. There’s been a similar development. Here, a paralyzed person can now experience the sense of touch using a brain-controlled robotic arm.

The robotic arm employs Brain Control Interface (BCI), the same tech used in Neuralink’s neural implant. Nathan Copeland was 18 years old when he was injured in an accident that caused him to lose his sense of touch in the majority of his body parts and his ability to move. Later, he joined the University of Pittsburgh team that was trying to create a robotic arm that could potentially deliver a sense of touch and is completely powered by the brain.

For this, he went through surgery in which doctors implanted electrode arrays on his brain. The pattern of his brain activity can be read by these electrodes. It’s needed because the robotic arm is powered by signals from his brain. After three sessions, he was able to grip a cube with his arm simply by thinking.

The journey to date

That was just the beginning. According to a paper published in Science, Copeland can now actually sense something the robotic hand touches. When the team recruited the participant, the vast majority of electrical impulses from his body’s nerves were not reaching his brain.

The team hypothesized that a paralyzed person’s brain could stimulate the robotic arm and the response will also be stimulated by electric signals from it. In return, this will allow the person to feel the touch. The main challenge, though, was to make it feel normal.

So, how does it work?

As aforementioned, the microelectrode arrays implanted in Copeland’s brain will provide impulses to control the robotic arm. Researchers used the fact that Copeland still has feelings in his right thumb, index, and middle fingers to develop the system.

They also examined the brain to determine which parts react to those fingertips. The team then decoded his intentions from each electrode when imagining real gestures. And, he could feel the sensation as they turned on the current to specific electrodes in his sensory system. After the research team found he could feel the sense, they are ready to give him real touch feedback from the brain-controlled robotic arm. To portray a regular hand, the robotic arm has a sequence of sensors.

And after its use, the findings showed that Copeland could handle certain manual tasks using his robotic hand nearly as quickly as a person with regular hands. “The sensation would actually change intensity based on how much force the hand was exerting on the object,” Copeland says. “So I could also tell if I had a firm grip on it or not.”

Limitations of the brain-controlled robotic arm

The brain-controlled robotic arm is only a proof-of-concept for now and has several limitations. It is not yet market-ready as the participant needs to come to the lab to test it. The team is now investigating why Copeland’s sensation doesn’t always feel natural, and how to best control grasping force for delicate objects or more complicated tasks.