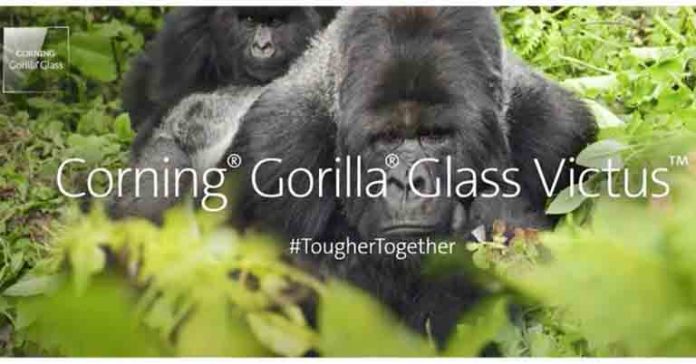 The majority of the smartphones these days come with the Corning Gorilla Glass 5. It’s because there is hardly any difference between Corning Gorilla Glass 5 and 6. The former had an 80% chance of surviving a fall of 1.6m. Its successor didn’t improve on that number but provided better protection against rough surfaces.

The thickness of the new Corning Gorilla Glass ranges between 0.4 to 1.2mm. However, Corning can manufacture glasses of other thickness upon request. The glass has a density of 2.40g/cm3 and Young’s modulus of 77 GPa. Similarly, the softening point is 827-degree Celsius (107.6 poises), which is lower than both Corning Gorilla Glass 5 and 6. The refractive index of the core glass is 1.51 whereas it is 1.52 for the compression layer.

According to John Bayne, Senior Vice President and General Manager at Corning, the motive behind the Victus was to come with a glass that could survive more drops while still being scratch resistant. Prior to this, the company focused on only one of the two aspects.

The latest Gorilla Glass Victus can survive a fall of up to 2m. That’s more than double the drop that normal glass can survive. According to Corning, non-Corning aluminosilicate glasses can’t survive drop beyond 0.8m. Similarly, Gorilla Glass Victus is more resistant than ever. In the Knoop Diamond Scratch Test conducted within the company, the new glass technology survived 8 Newton load with minor scratches.

How important is durability?

According to Corning, durability is a major deciding factor ranking second only to the brand name. This case is true in China, India, and the US, which are three of the largest smartphone markets in the world. The company also adds that durability is twice as important as other features like screen size, camera quality, and thickness of the device. Also, the 90,000 consumer feedback received by the company indicates that the drop and scratch performance has doubled in the last seven years.