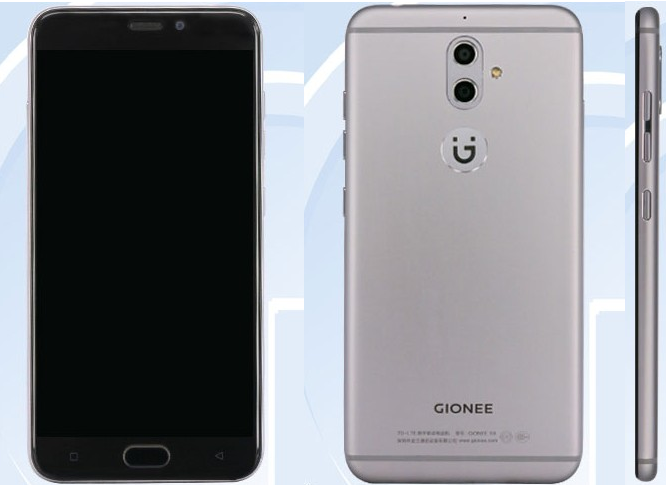 Gionee will be launching two new smartphones Gionee S9 and S9T. The camera focused phones from Gionee will sport dual camera setup which we don’t know exactly what for. Both the phones have been teased for a long time and after the leaks from Teena certification site, the design of the phone and some of its specs came to existence.

Design wise the phone looks like a mixed bag of Huawei Mate 9 and the iPhone 7 sporting a full metal jacket. Both the phones come with 5.5-inch Full HD screen and is equipped with 4GB of RAM and 64GB of Storage which is expandable. S9 and S9T will be running on Android 6.0 Marshmallow and as far the rumors suggest, both the phones will come with a new version of Amigo UI giving the phone a refreshing look with new added functionality. Up front, it comes with a fingerprint sensor which also acts as a home button. Talking about the camera, both the phones sport a dual camera with 13MP Primary Camera and 5MP secondary Camera, the purpose of the secondary camera is still a conundrum. It can be for the bokeh effect, wide angle or even for zooming like we saw on the iPhone 7. Even the front houses a 13MP sensor and LED flash to make sure it’s a well-rounded camera phone.

The only difference between both of these phones is their weight and the processor. The Gionee S9 weighs at 166grams while the Gionee S9 T weighs solid 200grams. Gionee S9 is confirmed to come with a 3000mAh battery but no words have been spoken about the S9T so the extra weight on S9T suggests that it’ll come with a massive battery. Despite that, the S9 is powered by a 1.8Ghz octa-core processor (unknown brand) and the S9T is powered by a 2.0Ghz Processor (possibly Helio P10). The S9 is expected to come in Silver color and the S9T is expected to be in Black.

The pricing of the phone is unknown and the phone should be available in Nepal within few months.