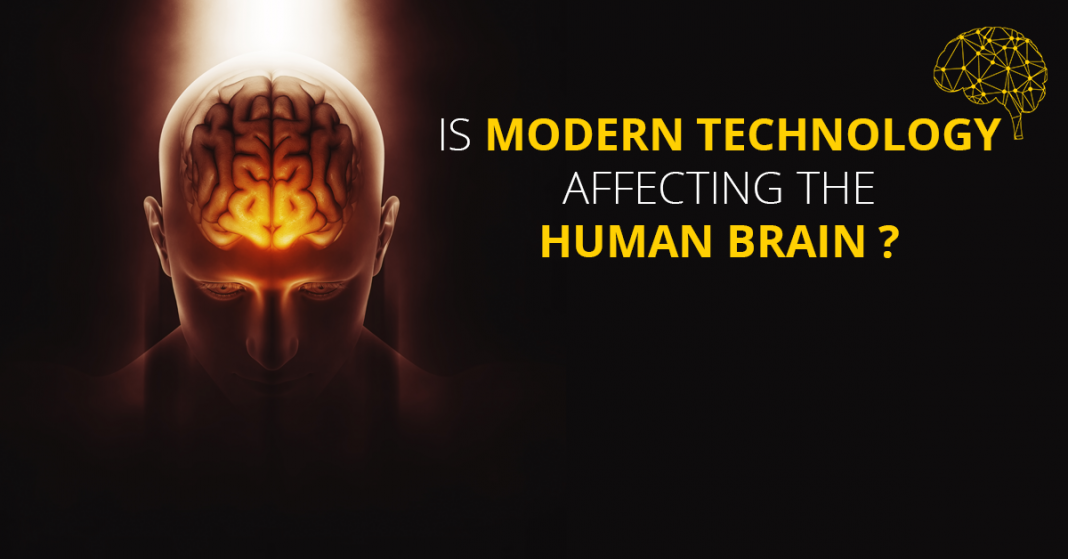 With a rate of constantly evolving and inflating digital technology, the world as we perceive has become more concise. We’ve arrived at a point where we can’t divorce oneself from the ever improving digital trends. Our brains are always under the influence of latest gadgets like smartphones, tablets, etc.). People can have real-life experience with the modern advancements in Virtual Reality, and the coolest games that are available now, and finally the Internet. Everyone, aging from children, teens to adults spend a considerable amount of time involving in these new digitized widgets. Since our brains are adaptive to the environment itself and go on developing, changing and, in some cases, eventually degrades with age, the surrounding environment plays a huge role in its development. After all, we are a species whose brain functions with response to external stimuli; or the environment.

In this modern era, where information is so cheap and easily accessible, we rely more on our smart devices and the Internet rather than thinking independently for ourselves. Children spend most of their time indoors with their devices which make them less attached to nature. Teens nowadays involve more in social media (Facebook, Twitter, etc.) comparative to having real conversations and social interactions. Google, Facebook, and Wiki are the top most visited sites in the world and there are about 3.5 billion users across the globe with internet access. Search engines like Google hold around 10-15 exabyte (an Exabyte equals 1million terabytes) of data which is a formidable amount of information impossible to be accessed in a single human lifespan. So, is the modern technology altering our human identity? Let’s see what science has to say about these contradictions and how digital technology really affects our brains.

Researchers at the University of Waterloo in Ontario, Canada involving around 700 people, carried out a study on human behavior and rate the results in the areas linked to perception, memory and brain function of their volunteers. These studies showed that the people who intend to use their smartphones most of their time in a single day were showing cognitive failures and low spatial reasoning. Also, researchers claimed that ‘these smartphones were making us less able to think for ourselves’ and also it made people lazier than ever. And on top that, they added, ‘Googling information we don’t know is replacing our natural curiosity’.

Another study shows how sat-nav (satellite navigation system a.k.a GPS) has helped a motorist on their journey but also, affected their memory as they remembered less about the journey and struggled to find their way out without the use of sat-nav. Similarly, relying exclusively on search engines led individuals to remember superficially about the information they obtained considering they could easily access that information later whenever they use these sites. Evan Risko, a professor of cognitive psychology refers this malfunctioning in the brain as ‘cognitive offloading’ or using these smart devices in order to save our memory power. Since smartphones are helpful to overturn our cognitive limits and save memory spaces in our brain, another study claimed that most of the museum goers carrying digital cameras often forgot the objects they remembered when they have captured apart from others. But what less can we do, it’s a tough task to turn around our head upside down to look into an object or scenery. A smartphone can easily capture that image, or imagine a quad copter that captures an entire 360degree spatial image. However, they couldn’t explain the long-term consequences of frequently offloading our reasoning in this hi-tech environment. Although, it is true that these smart devices have made most of our lives so easier by assembling all the remainders, phonebooks and managing our identity in social media. World gaming industry growing day after day and the Internet, helping us to connect friends and families across the world and easing the tasks of many employees, workers, and even a laborer, but it does not eliminate our ability to interact with outside environment and maintain out interaction with nature itself. Given a certain time, we can memorize all those contacts saved in our Android or iPhones or do complex mathematical calculations or memorize any book with ease but instead, we use these devices as a means to free up memory spaces in our brains and use it for other important tasks. Our brains still function the same as our ancestors did centuries ago, though it is now adapting to a new information-rich modern environment. It is now up to us and how we use these technologies to create a better environment for ourselves and our future generations.