JBL’s GO lineup of portable Bluetooth speakers is some of the best in their respective categories. With a minimal, lightweight build and the classic JBL sound profile, the GO series is beloved by many. And back in September, the company added the GO 3 to this lineup. Featuring a new design choice and a better audio setup, it is another fine portable Bluetooth speaker. Allow me to discuss more in this review of the JBL GO 3.

As I just said, the GO 3 features JBL’s new design language that we’ve seen in its other portable speakers like the Flip 5. Instead of the rubberized housing like in its predecessor, this one now comes with a full-body wire-mesh fabric—a change I welcome with open arms. But the bigger design upgrade is its IP67 certification. Apart from the usual water protection, GO 3 is also weatherproof against dust. Here, while JBL GO 2 gave in to minimal aesthetics, this one looks a lot bolder, and consequently more premium as well. The base of the speaker offers a decent grip, while also keeping the device steady when playing thumping music. Likewise, if you choose to place it standing tall instead of laying the GO 3 flat, the cylindrical rubber pads help it stay in place.

Moving on, the left frame of the speaker finally introduces a loop in JBL’s GO lineup—thus adding to its portability. It is incredibly sturdy and using this, you can easily attach the GO 3 onto a clip, or hang it on an upright surface. Anyway, just beside it is the USB-C charging port, which is free of any obtrusive flap. In my opinion, just being able to plug a cable straight in without having to deal with an unnecessary barrier adds to the simplicity of using a portable speaker. 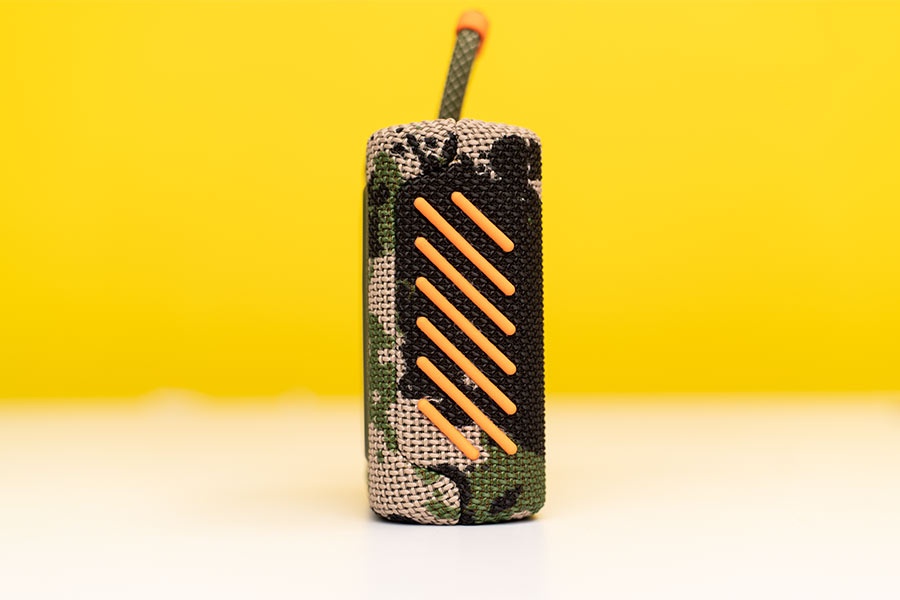 On the opposing end are the power and Bluetooth button alongside the “GO 3” branding. Similarly, all the playback and volume control buttons sit right above the JBL logo. In the midst of achieving all these improvements, JBL GO 3 is slightly heavier than the one before it. Yet, at 209 grams and an almost identical dimension, it is still exceptionally portable and you will have absolutely no problem carrying it around in your pocket. With its weatherproofing, GO 3 is also an ideal companion for your pool parties, hiking trips, or other outdoor activity. Fun fact, it is also buoyant on water.

Things are pretty boilerplate when it comes to pairing the JBL GO 3 with your smartphone or other Bluetooth-enabled devices. For first-time pairing, just power on the speaker and turn on Bluetooth to make it visible to other devices. After a successful connection, the LED indicator steadily glows white and you’re good to go. Likewise, for subsequent pairing with the same device, simply powering on the GO 3 will do the trick. 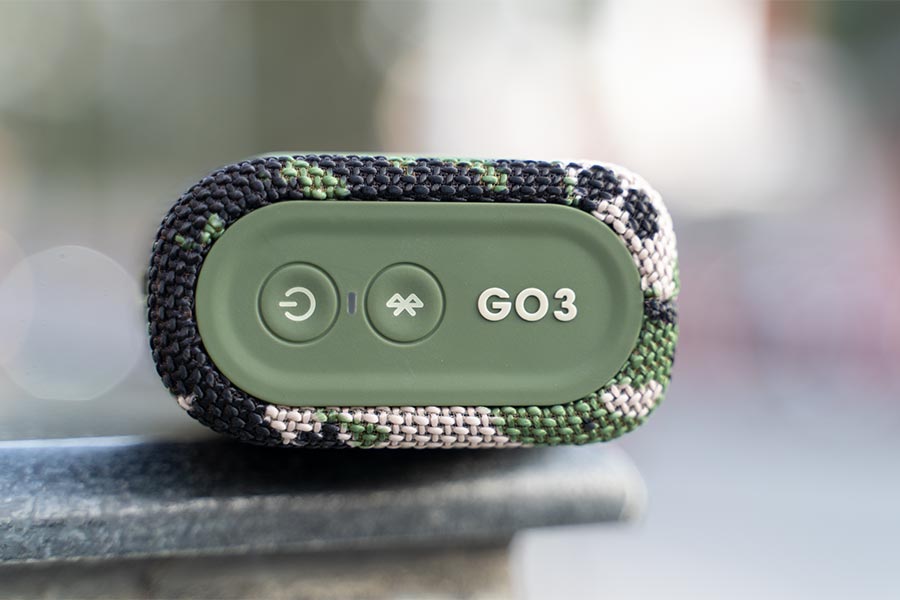 Thankfully, JBL has finally gone Bluetooth 5.1 with the GO 3. We’d complained dearly about JBL’s infatuation with the older Bluetooth 4.2 protocol on relatively more expensive speakers like the Flip 5 and Pulse 4 and seems like the company has finally learned its lesson. To keep it brief, the newer protocol facilitates transmitting bigger bandwidth of data, and on a wider spatial range.

To test out this claim, we compared this with the JBL GO 2 that comes with Bluetooth 4.1 connectivity. While the signal starts breaking down between two attached rooms on the GO 2, its successor manages to maintain a strong connection—even when moving up and down a floor. But don’t push your luck though. With enough obstacles in between, the Bluetooth connection in JBL GO 3 starts deteriorating pretty fast as well.

As I’ve discussed the power & pairing controls already, allow me to jump ahead to volume and media playback buttons. Here, the JBL GO 3 comes with a dedicated volume up/down and a playback control button. Compared to the ones on GO 2, these offer much better tactile feedback thanks to the improved etching and are easier to press as well. The volume buttons are pretty self-explanatory. On the other hand, you can play/pause the audio by single pressing the playback button while double-pressing it skips the track.

Unfortunately, this doesn’t support going back to the previous audio, and you can’t customize the controls either since JBL GO 3 is app-incompatible. What I’m here referring to as the playback control button was better known as the multi-function button on its predecessor—for a reason.

You see, the JBL GO 2 came with a built-in speakerphone which could be used for phone calls or interacting with a digital assistant. However, that’s entirely missing on the newer batch of JBL speakers including the GO 3. But because its implementation was half-baked at best, at this point, I’m glad the company skewed away from this rather primitive feature for a better speaker system instead. But I can’t say the same for the blaring absence of a 3.5mm aux input. 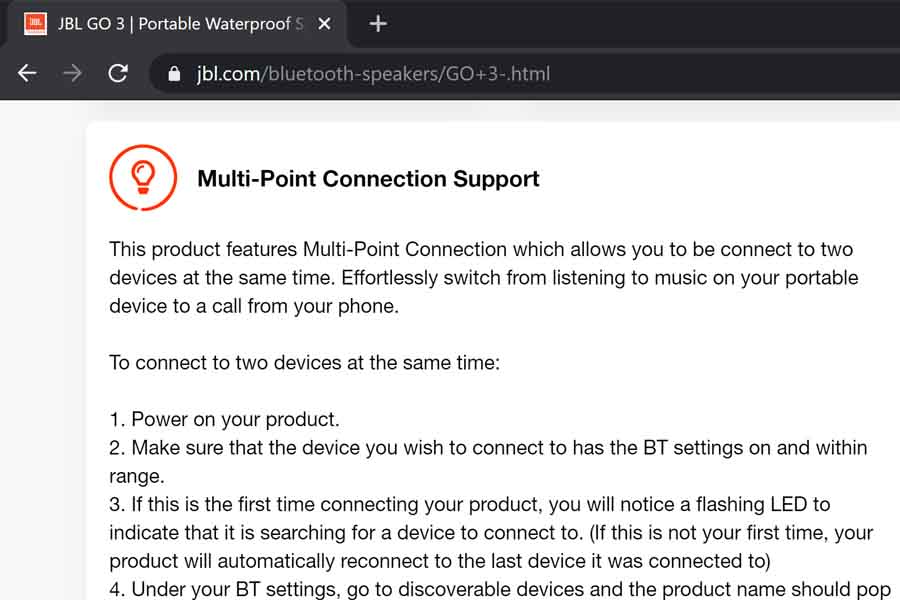 Another thing I’d like to mention is that even though the official support page of the JBL GO 3 mentions its multi-point connection capability, it actually doesn’t. To be honest, the claim seemed too good to be true for a budget speaker and our tests proved rightly so. Maybe, that section on the website made its way there because of an error—a rather misleading error.

Finally, let’s talk about the audio performance of this device. Seeing how JBL GO 3 is an ultra-portable Bluetooth speaker, I went into the review with rather low expectations. And boy am I glad that it thrashed my assumptions beyond my imagination. For such a small speaker, the JBL GO 3 can get quite loud—enough to immerse an average-sized room with the audio. But the bigger surprise lies in the fact that the audio doesn’t distort even at the maximum volume. That’s top-notch engineering right there.

Here, the GO 3 has a front-firing passive radiator and transducer like the GO 2. Despite this, the air-seal seems to be oh-so tighter on the former. On Aphex Twin’s “Rhubarb”, which is an ambient track with a minimal synth loop and a persistent hum that follows to the end of the song, at full volume, JBL GO 2 distorts from the get-go whereas its successor doesn’t face this issue at all. There’s also this inherent difference in sound quality in these speakers. The best way I can put it is that the audio from GO 2 sounds confined and often times concentrated, whereas GO 3 sounds more spatial and distributed—albeit featuring a mono driver.

That’s major thanks to the bigger 1.5” transducer with 4.2W of RMS output too, compared to 3.1W on the GO 2. Furthermore, this new speaker boasts a wider frequency range too. Listening to “In My Secret Life” by Leonard Cohen, the drum loop and bass thumps sound clearer and punchier on the GO 3 as well. Likewise, the vocal comes off raspier as intended on the GO 3, but in this instance, the GO 2 isn’t that far behind either. Even deep bass music has a bit of character to them on the former while such music sounds almost completely flat on the GO 2. 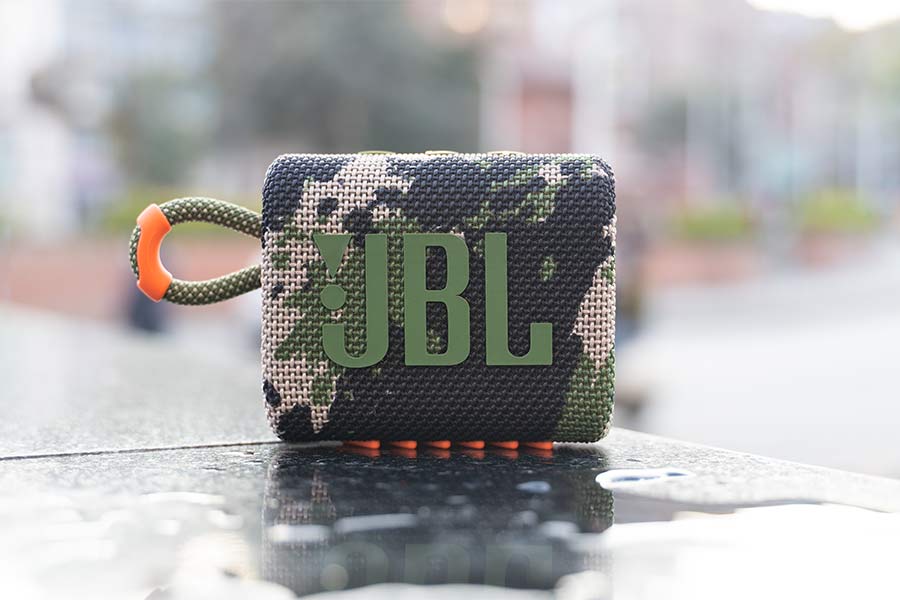 Similarly, I found that instrument separation and vocal clarity is better on the newer model. In Willie Nelson’s “Buddy”, the guitar comes off muddy on the GO 2. On the contrary, I enjoyed listening to the same song with much better details on the GO 3. Still and all, because this has a mono audio setup lacking in any sort of 360° sound, the moment you shift from the speaker’s line-of-sight, the sound quality drops heavily. But in JBL’s defense, that’s to be expected from a portable speaker. So, if you manage your expectations, you’ll thoroughly enjoy JBL GO 3’s sound quality—a lot, lot more than its predecessor.

Getting into the battery side of things, sadly, there’s not much of an upgrade here. JBL promises up to 5 hours of playtime on the GO 3 with its 750mAh battery, just like the GO 2. Similarly, charging up the battery still takes 2 and a half hours. But if it’s any consolation, this one now charges via a USB Type-C cable instead of the dated Micro USB protocol. Given its compact size, 5 hours of battery life seems fair but if you take it outdoors on a hike or other instances where you’d want to continuously play it for hours, then the endurance will turn out disappointing. In my usage, I mostly played music at around 80% volume—and at 100% every now and then to test out the audio quality. With this, I managed to net out at least 3 and a half hours of juice in multiple charge cycles. At times when I lowered the volume, the playtime would jump to a little over 4 hours.

To conclude this review, the JBL GO 3 is a fine addition to the company’s lineup of portable speakers. It brings great maturity in the audio quality, all the while retaining terrific portability. Add the enhanced weather-proofing into the mix, then you’re looking at a mighty fine budget Bluetooth speaker. So, if you’re in the market for an inexpensive and portable speaker, the JBL GO 3 should definitely be on the top of your list.