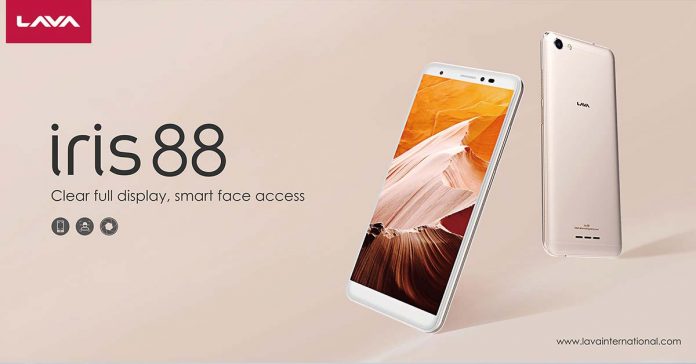 Lava is a smartphone brand that most of us are familiar with. It are a well-known brand of this smartphone industry, athough some might argue that they have lost their hold in the market and industry altogether. Looking to change that, the company has launched the Lava Iris 88 in Nepal.

The Lava Iris 88 has an 18:9 aspect ratio display with HD+ resolution. The display is a 5.45-inch panel that has minimum bezels at the top and bottom but does not feature a notch. The phone runs on MediaTek MT6739W processor paired with IMG 8XE 1PPC GPU. It comes with 2GB of RAM and 16GB of storage alongside a 3000mAh battery. Camera wise, the back has an 8MP sensor with flash. It supports Dual Bokeh effect for a much softer and brighter portrait. The front camera also has a trick of its own, with a 5MP sensor. It is also the same sensor used for FaceID, which LAVA claims takes just 0.8 seconds to unlock.

The back of the Lava Iris 88 has a metallic texture to it, although it’s not real metal. On the OS side, it does run on Android 8.1.0 with Lava’s own Star OS on top. Colour options available are Grey and Gold and the phone itself will cost you Rs 14,290 in Nepal.