Locus 2017 kicked off from yesterday. The largest innovative technological festival finally came through us, keeping us aside from the shadow of anticipation. Different innovative ideas and prototypes are showcased in the Locus 2017 event. The Locus 2017 event has been able to gain the attention of the general public, students and technology enthusiasts. At the end of the second day, nearly 12,000 visitors visited Locus 2017 event and there is still a day left if you are left behind. According to the organizers, there are some special events taking place on the last day. 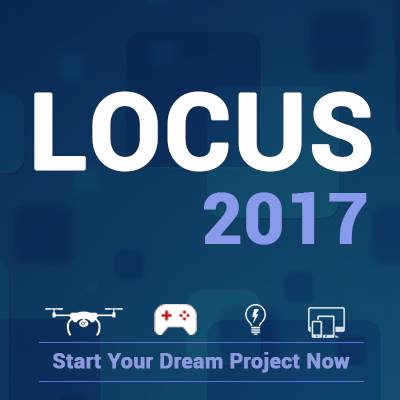 Locus is a student-run organization. The organization is pillared by the students of Department of Electrical, Electronics and Computer Engineering of the IOE Central Campus, Pulchowk. Locus committee has been responsible for organizing the largest innovative technological festival in Nepal. Locus organizes the events annually in order to inspire students to think innovatively and to make the practical applications of the ideas learned academically. The event includes hardware, software prototype demonstration and idea demonstration. Before the events, Locus performs many activities often named as pre-events. To name a few, Energy Hackathon, Hack a week, Load Management Awareness Classes, +2 Level Quizzes, Children in Technology, Walkathon, Ethical Hacking Workshop, etc are the pre-events organized by Locus. As the government is showing aloofness (and sometimes economy has been a barrier), to give a platform to implement the academic knowledge, through Locus, students have raised from their seats to add values to our education system. And this event has been the fourteenth year of organizing such events. This year’s Locus, Locus 2017 started from yesterday (9th of February) and will run until tomorrow (11th of February). If you have not been there, there is still a day left to have a look at a number of innovations made by students under one roof. The third-day visitors will be in advantages as there are special events going to take place. The entry fee for the event is completely free.

A lot of hardware projects are kept on the presentation on Locus 2017. The developers are single or group of +2 or Bachelors of Engineering students. The event includes fascinating projects. Some of them include smart and friendly devices for the people with physical impairment, ideas for home automation, security device prototypes, demonstration of electrical and electronics phenomena through projects, etc. On the software sides, there are many developers, who have shown their insides through apps and websites coded on different platforms. Some of them include home automation through software, mobile tracking, etc. Some of the developers have also attempted to ease the journey, helping with the information on traffic, bus fare and the events having nearby. There was also a project endeavored for providing relevant information for the tourists in Nepal. On the software side, there were some AI based projects too.

The event also includes games and simple competitions for the recreation. In addition, there are stalls for the trade of electronic gadgets and electronics components. Moreover, there are training institutes too in the events, which can give software and IT training with discounts. After 5 pm on each day, there is Acoustic Eve, where the interested ones show their musical talents.

There are special events too in Locus 2017, which are kept to be disclosed tomorrow. Dronacharya (Drone competition), the most awaited event in Locus 2017 will be happening tomorrow. Starting at 5 pm tomorrow, there will be flash mob followed by the regular Acoustic Eve. In addition, the winner of the competitions of Locus 2017 events and pre-events will also be announced tomorrow. The winners will be awarded on the special program organized by Locus on Agrawal Bhawan on 14th of February.