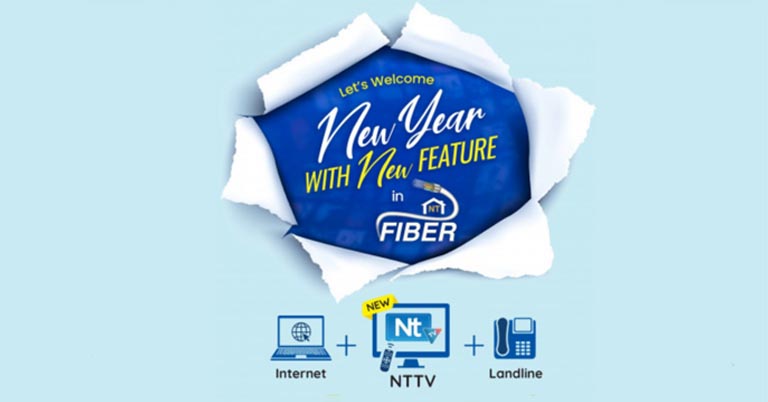 With fiber internet becoming more accessible in the country, the number of IPTV users in the country has grown for the last few years. Major Internet Service Providers (ISPs) now bundle IPTV with their internet plan. This has also contributed to the popularity of the platform. Now, the state-owned Nepal Telecom has adopted this technology as well. The new NTTV service is now available for fiber internet subscribers of Nepal Telecom.

But first, what is IPTV?

Before moving forward, let’s discuss the technology itself. The term IPTV stands for Internet Protocol Television. An IPTV offers Television service but through the use of TCP/IP protocol. What this means is that your favorite channels or contents are delivered to your device over the internet.

In traditional broadcast video technology, all the channels or contents are transmitted at the same time and users can choose between them. However, there is a limitation on how many channels a TV cable or a satellite signal can contain. As opposed to it, in an IPTV, only the content of the user’s choice is transmitted to the user. When the user changes the content, a new stream is set up to get the content to the user’s device.

One can enjoy services like linear TV (Live TV), non-linear TV (Video on Demand), time-shifting, and so on. In an area with internet access, it is also more convenient.

IPTV has been here for years. The concept was first popularized in Nepal by NetTV before ISPs came up with their own alternatives. Nepal Telecom (NT) tried to compete with the growing NetTV back then with its own WOW Time app. One needed to subscribe to the linear TV OTT service and use movies and live TV through Wi-Fi and data Packs. NT even introduced streaming data packs for the same. However, the idea didn’t go as planned and the platform has been dead already.

Nepal Telecom called a global tender to provide IPTV service to its users on 10th June 2019. Later, an agreement was signed between NTC and a joint venture between VNPT Technology and Kalash for the same on 14th October 2019. The agreement will be in effect for five years from the date of signing.

The new IPTV/OTT platform was successfully setup and tested back in 2019. The service was supposed to launch from 1st Baishak 2077. However, the idea had to be dropped because of the ongoing pandemic and the recent implementation of the clean feed policy in the country. After all the delays, the NTTV service has now commenced from January 1st, 2021.

In order to enjoy the NTTV service, you will need to subscribe to either NT fiber or landline service, at least. As of now, it is not available as a standalone service. All of the three services will be provided from a single line.

NT is offering two NTTV packages – Basic and Premium. We expect the latter to come with more channels and services. However, NT has not provided any information on that matter. Similarly, users can choose between the Internet + NTTV or NTTV + Telephone package.

The NTTV service is limited to a handful of regions inside and around the Kathmandu Valley. However, Nepal Telecom plans to expand it to other regions with access to NT FTTH service. The latter is available in 73 regions in 33 different districts.

New users will have to pay for an FTTH router and a new setup box. However, existing users will only have to pay for the set-up box. Similarly, the installation charge is also subsidized for existing users. If they decide to switch to an internet package with NTTV, they will receive a discount on the package fee amounting to the fee associated with their existing subscription package.

Before subscribing to Nepal Telecom’s NTTV, first, check if the IPTV service is available in your region. Then, contact the nearest NT office and choose the package of your choice. Fill up the necessary form and submit it. Existing users do not need to fill the form.

So what do you think of Nepal Telecom’s NTTV IPTV service? Will it prevail among all the existing services or will it suffer the fate of WOW Time? Let us know in the comments section.