Nokia phones, especially the budget and mid-range ones, share this cohesiveness in terms of their design, relative performance, and overall user experience. Maybe that’s for the better, or worse: it’s not up to me to say. Anyway, the new Nokia 2.4 doesn’t really evoke a sense of innovation as the Finnish company didn’t bother to bring any changes from its predecessor—I’m talking about the design, of course. So, how does this “iterative upgrade” of a phone perform? Allow me to discuss more in this review of the Nokia 2.4. 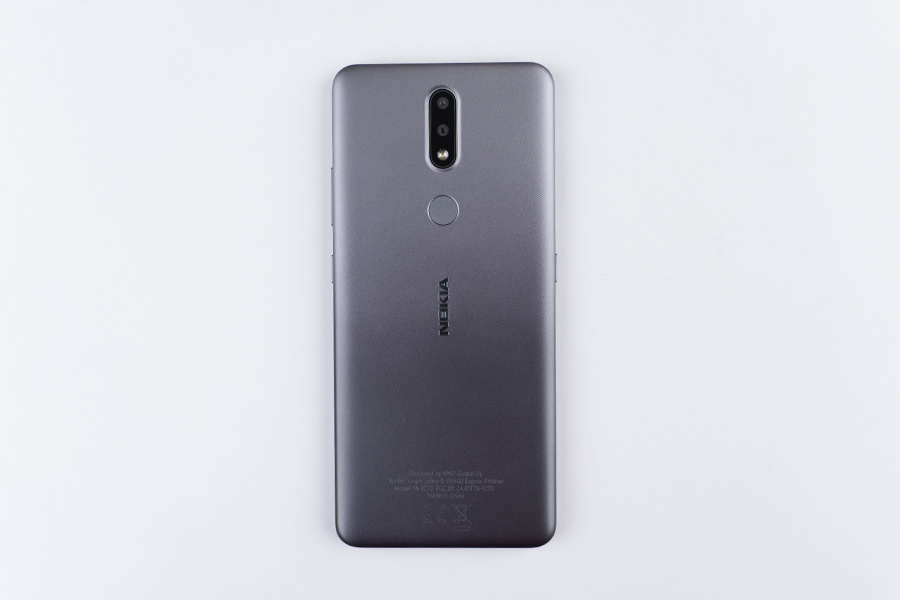 Like I said earlier, there’s hardly any deviation in the design language of the Nokia 2.4 compared to the Nokia 2.3—let alone an overhaul. It is still sturdy and feels super nice on the hand. For what it’s worth, the phone much more premium for the price. As expected, it has a polycarbonate body with a 3D nano-textured cover at the back. This offers a nice grip and even though it’s not a compact phone, I had no trouble holding it in.

Similarly, the rear panel is immune to fingerprints and smudges too, although it can get a little clammy after a while. The tiny space between the ridges may also attract dust particles which will be a little hard to get off. So, using a case is advised regardless. Nokia 2.4’s color options are quite attractive as well even though it doesn’t have a fancy reflective back.

Available in Fjord, Dusk, and Charcoal variants, the latter that I have with me complements the overall aesthetics nicely. Moving on, there’s a 3.5mm headphone jack at the top frame alongside a primary microphone. The volume and power buttons are placed on the right, while there’s the trademark dedicated Google Assistant button on the left.

Finally, you’ll find the secondary mic, a micro USB port, and the speaker grille at the bottom. Like always, the Google Assistant (GA) button cannot be remapped natively, though you can with a third-party app like Button Mapper. You can already trigger GA using your voice or swiping from the bottom edge of the screen, so having a dedicated button feels redundant at this point.

Getting to the display, Nokia 2.4 now has a bigger 6.5-inch IPS LCD panel, but with the same old HD+ resolution and a 20:9 aspect ratio. For its sub-15K price point, the inferior HD resolution isn’t surprising. But I must say, looking at the display contents with a fair enough distance, it actually doesn’t look that bad. Yet, having it close to you (like you would normally), one can notice the lack of sharpness in images. 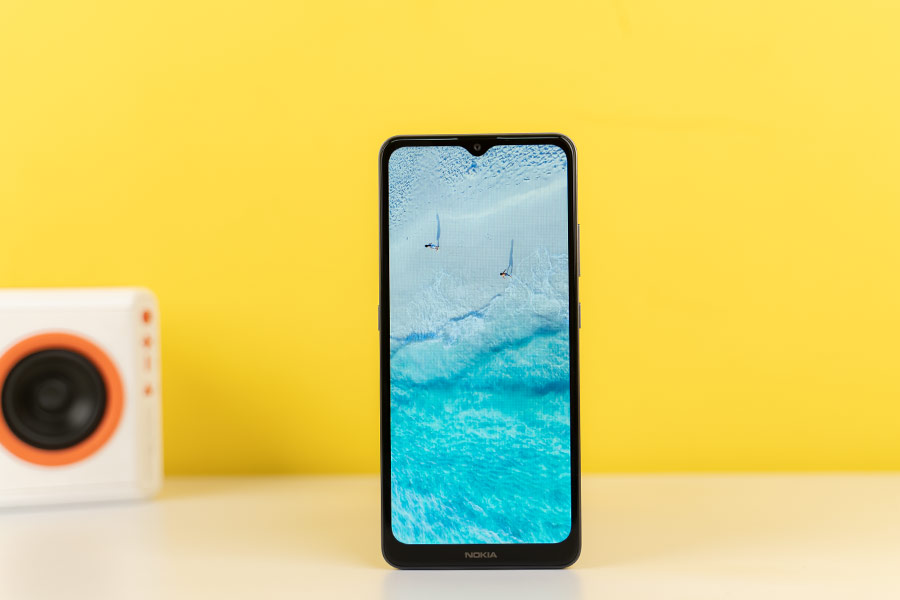 Moreover, in its default setting, the display is a fair-bit on the warm side too. But it’s not something to worry about as you can easily dial it down to your preference under the “White Balance” option in the settings. Nokia 2.4 can get bright enough for indoors and cloudy outdoor situations but you will struggle to view the phone’s content under direct sunlight. Like any other traditional budget phone, you’re greeted with quite a bit of bezel here as well.

Thankfully, the rounded edges of the Nokia 2.4’s display don’t have any sort of discoloration. There’s a teardrop notch up top for the selfie camera and a big chin that’s home to a “Nokia” branding. Overall, the phone manages to net out 80.6% screen-to-body ratio. Unlike its predecessor, I didn’t notice a single instance of accidental touches on the Nokia 2.4.

The performance sees a much-required boost as it comes with an octa-core Helio P22 processor from MediaTek—while the Nokia 2.3 was powered by a quad-core Helio A22. Because of this, the user experience is considerably better. The image processing is faster and so are other assorted actions. But mind you, this assertion only comes with a direct comparison between the aforementioned phones when in reality, the core performance of the Nokia 2.4 still isn’t that great.

Here, Nokia has coupled the Helio P22 with either 2/3GB of RAM and up to 64GB of expandable internal storage. My review unit has a 2/32GB configuration and it didn’t fare well under my usage. First off, the RAM management is almost laughable. Out of the 2GB available, the system occupies around 60% and you only get about 700MB to play around with. 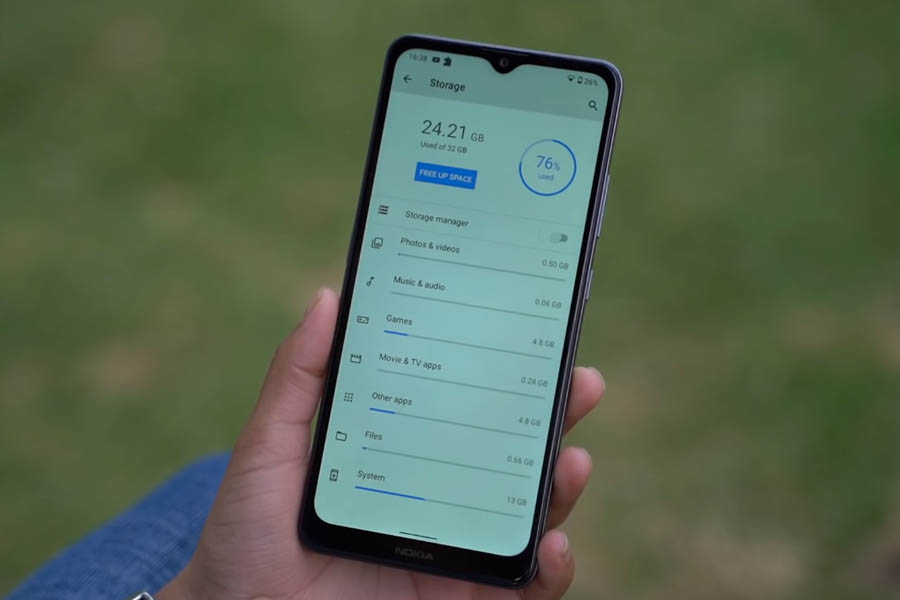 Because of this, I time-and-again witnessed stutters and lags during gaming or even light multitasking sessions. The system UI would also briefly misbehave when certain heavy apps are in the memory. Furthermore, out of 32GB, 11GB is occupied by the system itself. So, I would highly encourage you to get the 3/64GB model instead.

Talking about gaming, light games like Among Us, Clash Royale, Mario Kart Tour, etc. work perfectly fine. Similarly, I tried playing Call of Duty: Mobile and it ran fine under “Low” graphics and “Low” frame rate although upping the frame rate to medium or high would result in frequent lags.

On the other hand, PUBG Mobile Lite is playable even in “HD” graphics and ‘Extreme” frame rates. But, your gameplay will be subject to frequent stutters. Moreover, the touch response on the display would give up on me at times, making my gameplay experience abysmal. 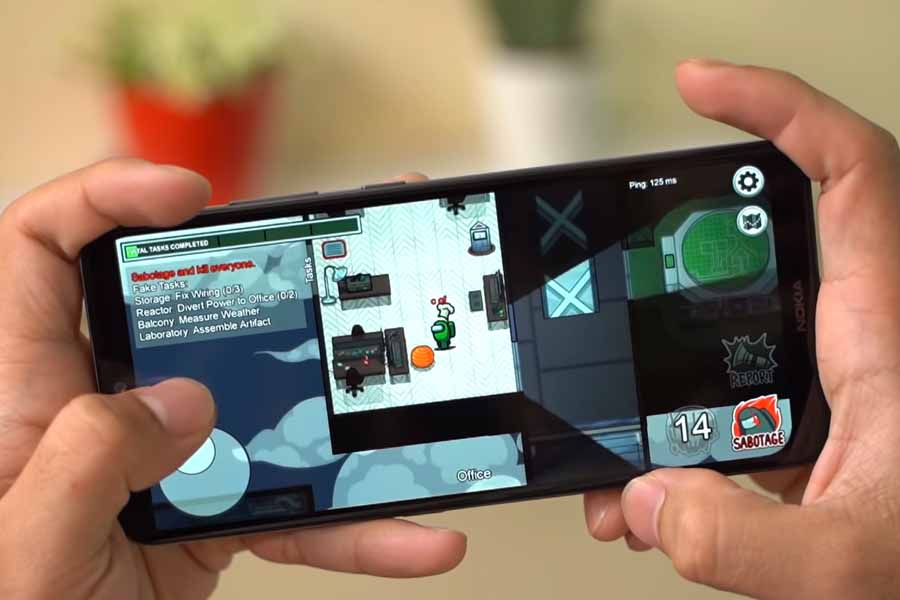 Nokia 2.4 runs on stock Android 10 and is also a part of the Android One program, thus promising two years of software and up to three years of security updates. At the time of writing this review, my unit of Nokia 2.4 has already received September’s security patch. HMD Global had already revealed the Android 11 update plan for the phone on Q1 2021 but quickly took down the post. So, when it’ll receive the latest Android update remains a mystery now.

There’s the same dual rear camera setup at the back and a single front-facing lens on the Nokia 2.4. As a result, the camera performance is more or less the same as its predecessor. The 13MP primary sensor alongside a 2MP depth sensor and the LED flash has been placed inside a vertical pill-shaped module, with a dismissable bump.

Images from the primary sensor can look pretty good if you can get ample lighting.

They are fairly sharp and have plenty of details to enjoy and the colors aren’t all that bad either. Photos do tend to look a-bit undersaturated (sometimes a bit hazy as well), and the camera can’t lock-in focus fast enough either.

Turning on HDR does help a bit in terms of colors—but it’s a hit-or-miss. Most of the time, the difference between HDR & non-HDR images is practically zero but sometimes, it works wonders.

Likewise, the 2MP depth sensor is just about average.

The edge detection is flawed and at times, the subject can look a bit oversaturated.

Nighttime images aren’t any good either. It looks completely hazy and the image is rather soft and full of grains.

Surprisingly, there’s a dedicated “Night Mode” in the camera UI but as I suspected, it’s a complete gimmick and doesn’t improve the image quality in any way.

Selfies from the 5MP selfie camera, just like the primary lens can look okay-ish with plenty of ambient light. But for the most part, subjects look pale and lifeless.

Software-based selfie portrait is not that good either and the edge-detection is rather flawed here too.

In terms of videos, Nokia 2.4 maxes out at 1080p from both front and back cameras. The sensor fails to lock-in exposure and the footage comes out very wobbly. Once again, I was surprised to find out the “Video Stabilization” feature inside the camera settings but this was a gimmick as well.

Getting to the battery, the phone has a decent 4500mAh cell which Nokia claims can last up to 2 days. The company’s similar claim in its other devices with similar battery capacity was true during our review and thankfully, Nokia 2.4 proudly embraces that tradition. 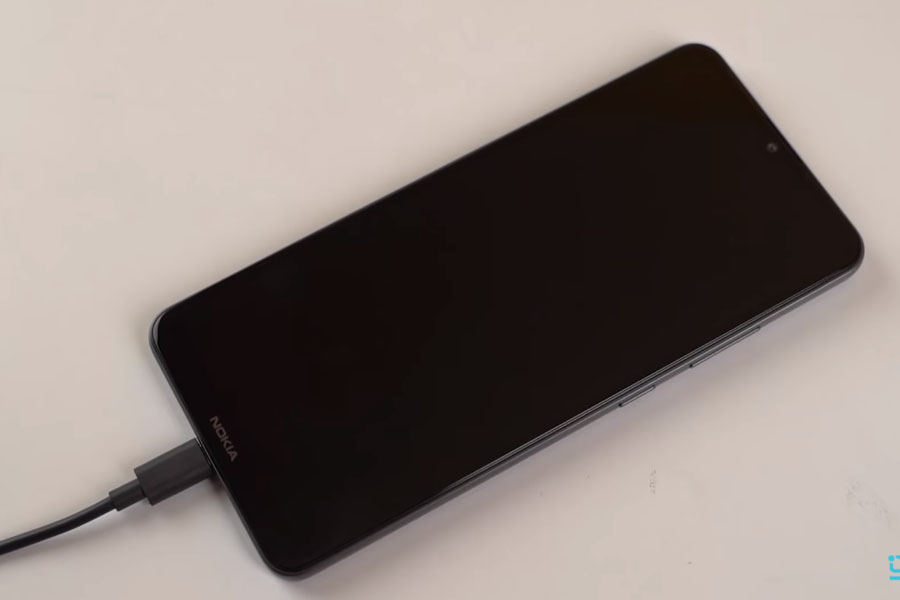 With light to medium usage, it can easily last you two days and should also get you through your day on heavy use. I watched a 2.5 hours movie with full brightness and max volume, and it only depleted 22% of the battery. All in all, you can get somewhere between 7 – 8 hours of screen-on time on this phone. But charging it via the micro USB connection takes a while. With its 5W charging, it took me about 3 hours 5 minutes to fully juice up the phone from 0 – 100%.

Other features of the phone include a circular plastic fingerprint sensor at the back. It’s definitely not the fastest one out there and takes almost a second to unlock. Also, if you try using it back-to-back, most of the time, it won’t work on the first try. And as usual, sweaty, wet fingers are a no-go too. Nokia 2.4 also supports face unlock but it’s even slower and less secure. Taking about 2 seconds per unlock, the lock screen doesn’t even show any indicator if it’s scanning for a face.

Finally, the single bottom-firing speaker isn’t that great either. The audio sounds shallow, incomplete and you won’t hear all the details from this. Likewise, there is almost no bass from the speaker. On the contrary, the audio from the 3.5mm headphone jack is much better, but nothing extraordinary.

In conclusion, the Nokia 2.4 is a decent entry-level Android phone, whose stock Android experience, excellent battery life, and seamless design should speak volumes to many people. However, from a pure performance perspective, there are a lot better options out there in the market from companies like Xiaomi, Realme, etc.