Home Nokia Nokia 2.3 Review: A budget phone with the right set of priorities! 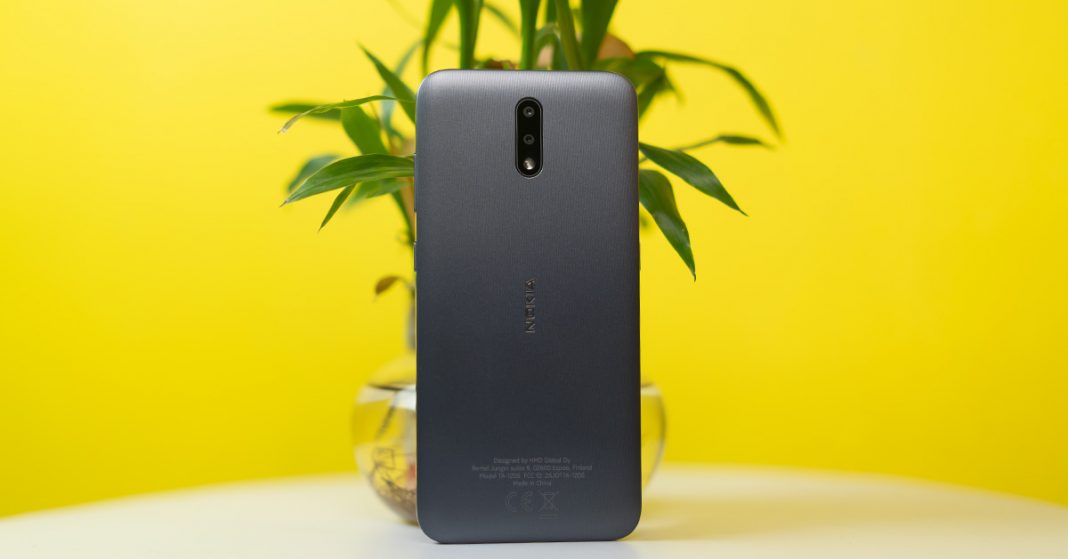 Budget smartphones have gotten a lot better in the past couple of years. You don’t need to spend a bucketload to get a decent performing handset anymore, which is all thanks to the ever-growing competition in the market. And we all know who sits atop the porcelain throne for the king of inexpensive devices – Xiaomi. Now, it looks like (and I hope) Nokia is having a shot at the crown with its new Nokia 2.3. Featuring a bold and hip design with some unique niceties of its own, this budget phone is one tough cookie. Let’s find out more about the Nokia 2.3 in this review.

Starting with the design, the Nokia 2.3 – boy it’s chunky. It had been a while since I used one phone this boxy, and I gotta admit, it’s almost as if the phone doesn’t need to be. The battery isn’t all that big, so… why? So many times, I found myself struggling to get a hold of the phone with ease and had to use both my hands even where you’d normally need not to. And the tall big screen isn’t helping either but I’ll get to that later on. The Nokia 2.3 is a budget phone so it won’t surprise you when I say it’s made of plastic. But the back is interesting, with a vertical ridge running throughout the device, while the frame is metallic. The one I have with me is of Charcoal color variant, though there are Cyan Green and Sand options as well. Getting into buttons, there are the power and volume rockers on the right, while you’ll find the Google Assistant button and the SIM tray on the left. Once again, they’re plasticky and loud, but still clicky enough.

Now some of you may be thinking what’s the point of a dedicated Google Assistant button when you can easily trigger it through your voice. And yes, I understand that as I too didn’t quite make use of the dedicated button as often as Nokia would’ve hoped. However, you can remap it to trigger some other actions using a third-party app (though native customization support would’ve been even better). Thus, I’ve customized the button to open notifications on a single tap, take a screenshot on a double-tap, and long press to kill the foreground app.

On top, there’s the primary microphone and the 3.5mm headphone jack. The sound quality is impressive as well but what’s more impressive is how strongly a headphone latches on to the port; strong enough to dangle the phone with it. The secondary microphone and the speaker grille are placed on the bottom alongside the unfortunate micro-USB port. Due to this, the charging is as slow as slow can get. As for the speakers, they’re decently loud but can get easily blocked out by your hands in certain situations like gaming.

Time to get into the display. Nokia 2.3 comes with a tall 6.2-inch “in-cell” IPS LCD panel, and I don’t even want to talk about how bad a name that is. And as expected, it has HD+ resolution – 1520 pixels vertically and 720 horizontally, with an aspect ratio of 19:9 and 271 PPI. Were the phone not that bulky, to begin with, the Nokia 2.3 would’ve been very easy to get to with one hand only. But since that’s not what’s happened here and it is thus a two-hand smartphone. However, the display cutout is impressive for a budget phone. It features a tiny waterdrop notch up top for the front-facing camera and comes with rounded corners too. Interestingly, while the expensive Nokia 7.2 also featured rounded corners, it suffered from visible discoloration around the top edges, which isn’t the case in Nokia 2.3. So, kudos to the company for that!

Modern design on a budget

With the modern design of the display, the phone achieves an 80.7% screen-to-body ratio because there’s a significant bezel on the bottom with the “Nokia” branding, alongside some subtle side and top bezels as well. You can also change the color temperature of the display under the “White Balance” option if the default setting doesn’t sit right with you. All things considered; I have two small and one major complaints about Nokia 2.3’s display. First, having used it without any protective tempered glass, it felt a bit unusually slippery. And second, the phone is frequently prone to accidental touches with no option to prevent that. Moreover, it doesn’t get bright enough to be easily visible in well-lit environments though that’s not a problem indoors.

The Nokia 2.3 comes with a dual-camera setup so let’s talk about that as well. There’s a 13MP primary sensor with f/2.2 aperture and a 2MP depth sensor for bokeh effects. Now, though the company has partnered up with Zeiss to deliver great photography on its smartphones, there’s no Zeiss optics on the Nokia 2.3. Both lenses are arranged in a vertical module alongside the single LED flash. 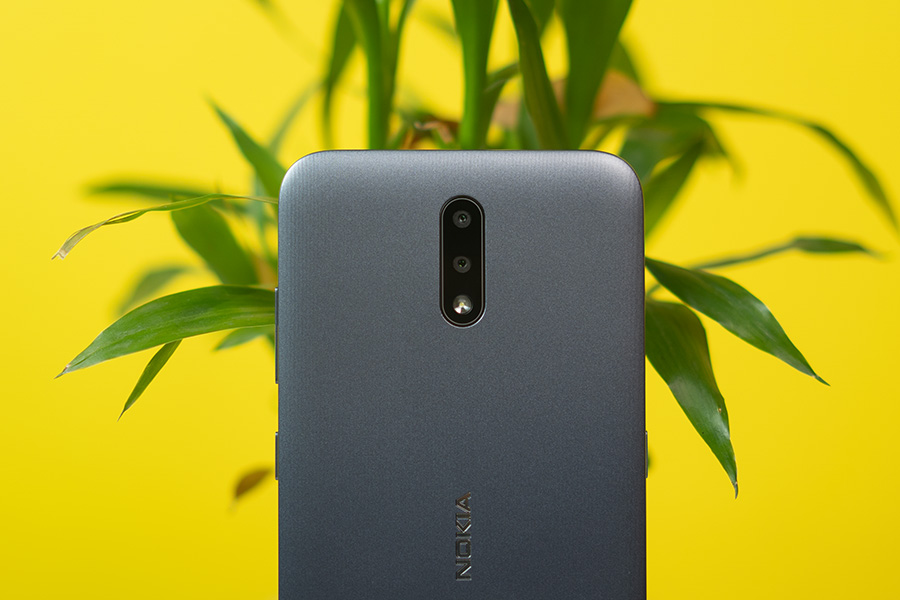 To sum up the camera performance on the Nokia 2.3 – it’s a hit or miss. Sometimes it works great and sometimes it doesn’t.

The normal images come out decent in a well-lit environment and the detail preservation is quite good too, though color reproduction could’ve been better. But when it fails (and it often does), the photos come out bland, grainy, with messed up dynamic range.

Talking about portraits, the edge detection is not that great too, but you may not notice that right away when looking at the photo. Upon closer inspection, however, the flaw begins to reveal themselves. It misses out greatly on the subject’s edges. One thing I noticed about the portrait images on the Nokia 2.3 is that they are brighter than the regular images.

Nighttime images aren’t any great either. The amount of grain is just way too much, and you’ll notice some smoothing going on too. Overall, low-light photography on the Nokia 2.3 is forgettable.

Coming to the front camera, there’s a 5MP f/2.4 sensor placed inside the waterdrop notch. 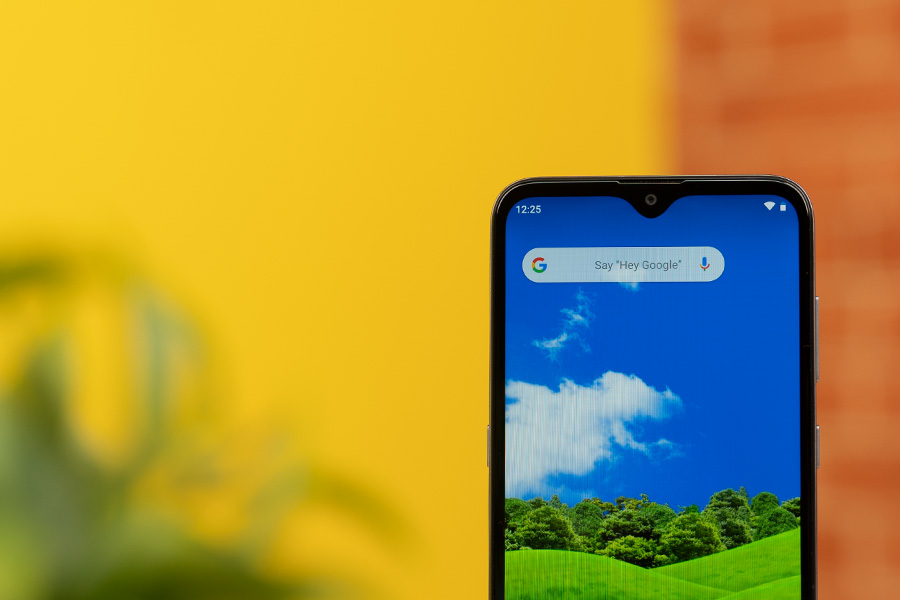 Regular selfies are lacking in color reproduction and there is a significantly low amount of detail as well. Additionally, the images are grainy and polished too.

Likewise, the software-based portrait selfies are a little better than the regular selfies in terms of color reproduction though it’s not perfect either. Moreover, selfie portraits on the Nokia 2.3 are also riddled with grains and lack of detail.

Moving on to the performance, the Nokia 2.3 is powered by MediaTek’s Helio A22 chipset, which can also be found in the older Nokia 2.2. So… not a great chipset selection there. The Helio A22 has a quad-core CPU with Cortex-A53 cores clocked at 2.0GHz and the PowerVR GE8320 GPU. 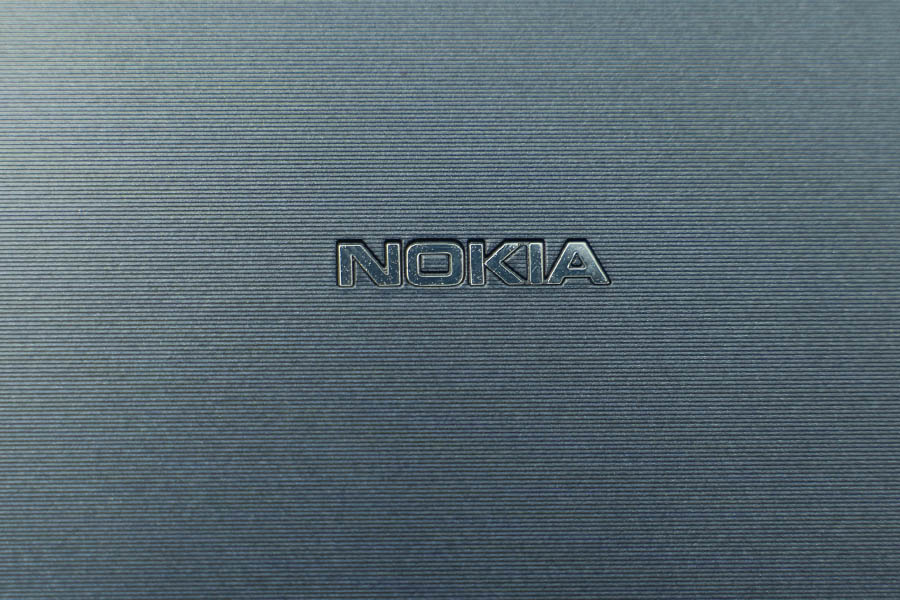 The phone comes with a single memory configuration with 2GB of RAM and 32GB of internal storage. Yeah, no multiple options there. Though it doesn’t lag as much and light multi-tasking is fine as well, Nokia 2.3 demonstrated how accustomed I’d gotten to a faster device. Let’s take a look at its benchmark scores:

From launching apps to making selections, the phone just takes its time, which I would have been infuriated about if this was a mid-range smartphone. This is most evident when taking pictures or videos. First of all, the camera app takes a second or two to launch, but it’s when viewing the clicked pictures where the lag is realized. The image processing on the Nokia 2.3 is just too slow. Here, the software-based face unlock is similarly hopeless. I could wake the phone, swipe to open the pattern layout, enter the pattern to enter the unlocked home-screen, and all that takes less time than face unlock. 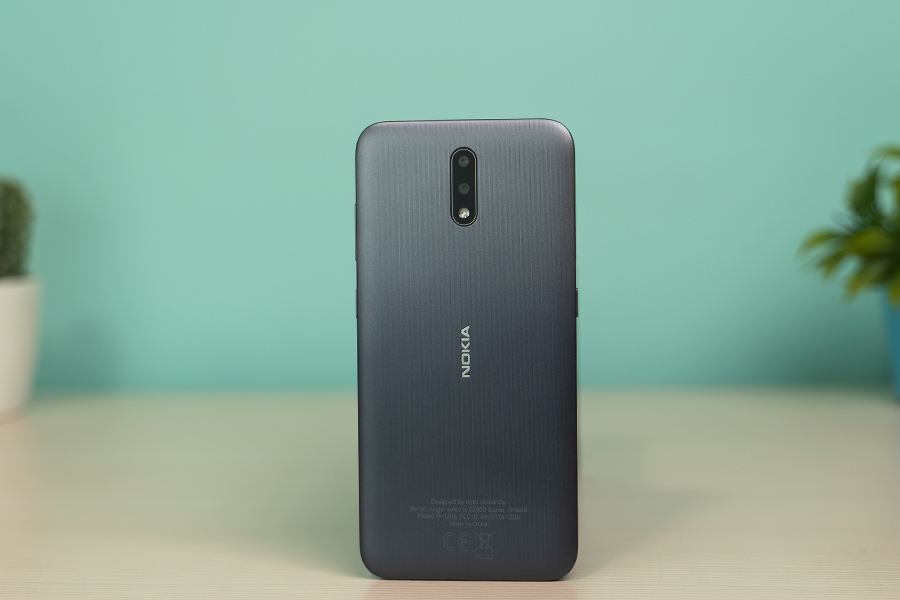 When it comes to gaming, it can handle a few big titles in the lowest of settings albeit with impending lags and stutters. I played Call of Duty for a while and the phone would frequently slow down when the game tried to load some resources. I also played Injustice 2 on Nokia 2.3 which ran smoothly but suffered from mild lags here and there as well. In terms of light games, I put the phone to test with Alto’s Odyssey which ran smoothly, but that too fell victim to minor lags now and again.

On to the software end, it runs on pure Android as the phone is a part of the “Android One” program. And me, I’m a sucker for stock Android which comes with no bloatware apps and up to 2 years of system upgrades and 3 years of monthly security updates. Though I didn’t receive the Android 10 update during my time with the phone, I sought solace with the January’s security patch.

Now the battery life on the Nokia 2.3 absolutely blew me away. The 4000 mAh AI-assisted battery on the phone really makes the phone a two-day device as the company claims. I continuously played Injustice 2 for over 4 hours (it was a slow day, don’t judge me), and the phone still had around 50% battery. All around, I got around 7 hours of screen-on time on a single charge. Wow, that’s impressive! But charging the phone is a pain. It charges via a micro USB port and doesn’t support any fast charging either. Using a 10W charger, it took me about 3 hours and 18 minutes to take the Nokia 2.3 from 0 to 100%, which is just a little short than Martin Scorsese’s The Irishman. So… yeah, while the battery life on this is ridiculously impressive, it’s charging, on the other hand, is ridiculously abysmal.

To sum it all up, the Nokia 2.3 is an admirable budget smartphone. It features a modern design and an incredibly impressive battery life. The stock Android herein further supplements to a smooth experience, while guaranteeing updates as well. Its camera is a hit or miss on this. With proper lighting and ambiance, the images turn out fine, though I cannot emphasize enough about the slowness of the image processor. All in all, the Nokia 2.3 is a great starter phone for someone who’s just looking for a decent Android experience on a budget.