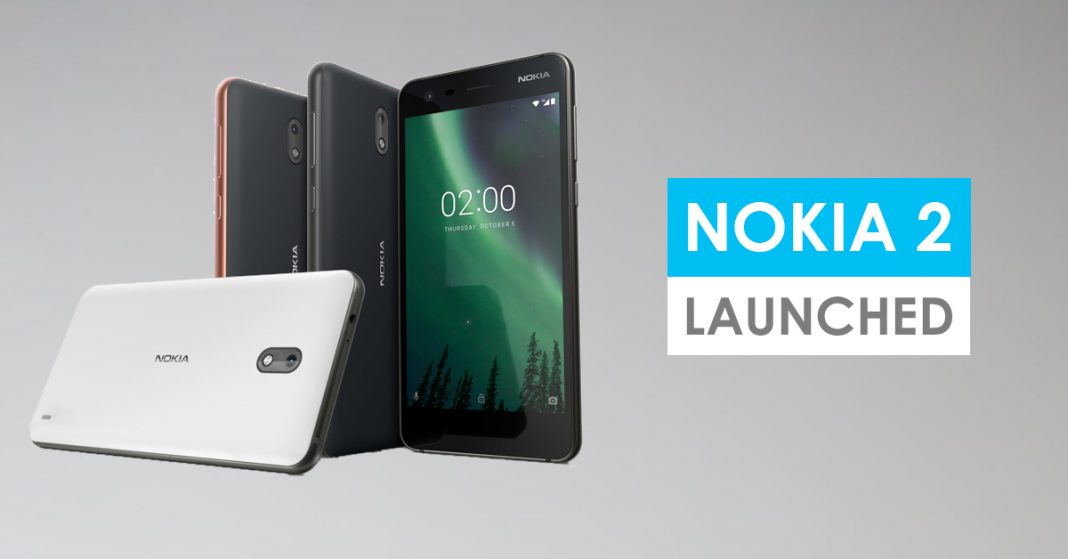 HMD Global is on a run to launch back-to-back Nokia smartphones. In doing so, the company has launched an entry-level Nokia 2 today, and it comes at a price of €99 in the international market. The price tag it carries has made it the cheapest Nokia smartphone around since the company’s reincarnation last February.

The Nokia 2 is a 5-inch device with 720 x 1280 pixels resolution. The IPS LCD display is covered by Corning Gorilla Glass 3. Unlike the rumored Nokia 9, which will supposedly come with minimal bezels, this device has a traditional display with 16:9 aspect ratio and 67.4% of screen-to-body ratio. The new Nokia 2 is powered by Qualcomm Snapdragon 212 SoC and a Quad-core CPU with 1.3 GHz of clock speed. The performance of this device is further supported by 1 GB of RAM and Adreno 304 GPU.

The Nokia 2 runs on Android v7.1.1 Nougat right out of the box which will be upgraded to Android v8.0 Oreo in the near future. Storage wise, the device has 8 GB of onboard memory which can be expanded via a microSD card. As far as the cameras are concerned, the Nokia 2 has an 8-megapixel rear-facing shooter accompanied by a LED flash and a 5-megapixel selfie shooter.

The USP of the device is its 4,100 mAh battery which, according to HMD Global, will provide two or more days of battery life under minimal usage. With this huge battery, it can sure go up against some of the popular entry-level smartphones available right now. HMD Global has also boasted the inclusion of Google Assistant in the device, mentioning it to be the first of its kind in the entry-level smartphone category.

The Nokia 2 will go on sales starting mid-November in the international market. It is available in three color options, namely, Black, White, and Copper. We are yet to receive any news regarding its launch in Nepal since the device is only a few hours old.