Before Android smartphones and iPhones were mainstream, Nokia phones ruled the mobile market. Their sturdy construction, everlasting battery, and amusing games like Snake, Space Impact, and Bounce still bring back nostalgia. In this article, we are going to talk about all the latest Nokia mobile phones in Nepal that are currently available in 2020 along with their official price, specifications, and features.

On the occasion of the upcoming festive season, Nokia has announced “Subha Utsav” offer. The campaign starts on 21st September and will last till 6th November. Upon purchase of a new Nokia phone in this period, users will be eligible for the lucky draw. To participate, send the IMEI number of the recently purchased Nokia phone to 3600 in the following format:

You will then receive a unique code with a confirmation message ensuring your entry into the official lucky draw. The draw will be held on Nokia Mobile Nepal’s official Facebook page.

Every week a lucky winner will win Nokia Wireless Headphones. Likewise, Nokia Portable Wireless Speaker and Lite Earbuds will be given to three winners every week. At the end of the campaign, two lucky customers will get a TV NTORQ 125 scooter each.

Back in 2011, when Android phones and iPhones were flowering in the smartphone market, Nokia opted for the Windows operating system—which turned out to be a wrong decision. Since then, the company started to lose its grip on the market share. The loss of people’s craze for Nokia phones became the main reason for its downfall. After this huge blow, Nokia sold itself to Microsoft.

Now, Nokia phones are available with Android OS. Freeing from the clutches of Microsoft, HMD Global came to revive Nokia and bring back its charm. Currently, HMD Global holds the right to sell smartphones under Nokia’s name, and it is responsible for all the recently launched Nokia phones.

In the context of Nepal, Paramount Electronics Pvt. Ltd. was previously the authorized distributor of Nokia smartphones and bar phones in Nepal. Although it held the title for quite a long time, they weren’t quite able to cater to the domestic audience. The smartphones were usually overpriced and in terms of the bar phones, they hadn’t been able to keep up with the market demands.

But as of now, we have Teletalk Pvt. Ltd. as the new distributor of Nokia mobile phones in Nepal. The company has been in the mobile business for a seriously long time. And as the company has already been a distributor of a couple of smartphone brands like Gionee and Colors, they have a good connection and noteworthy penetration in the offline market, which Paramount electronics seem to have lacked.

Maybe that’s the reason why HMD Global chose Teletalk as the new distributor. Along with the reasonable price, the company is offering 365 days replacement guarantee on the bar phones and 1 year of warranty on smartphones. 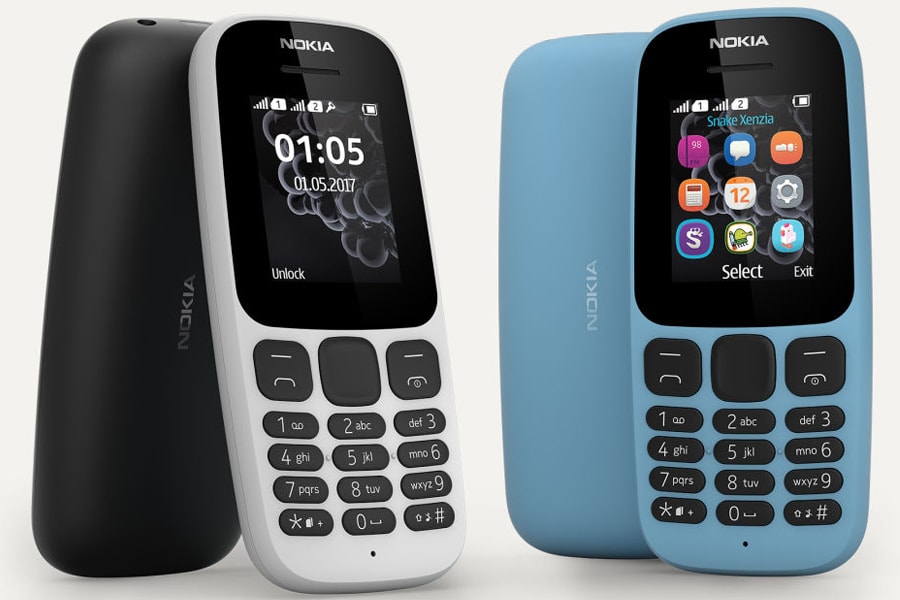 Nokia 105 (SS & DS) comes with a remarkably lightweight of 73 grams. They possess a sturdy build and are persistently resistant to damages. Both of them are privileged with a 1.8-inch color display and support QQVGA (120 x 160 pixels) resolution. Nokia 105 has a MicroUSB 2.0 port for charging and possesses a port for a 3.5mm headphone jack. The device also has FM radio and Torchlight (Flashlight) functionality.

The device runs on Nokia Series 30+ software platform and comes pre-loaded with the Snake Xenzia game. The phone has 4MB of internal storage and 4MB of RAM. However, there is no option for storage expandability and one has to settle with the pre-loaded amount. There is an 800mAh removable battery to drive the device, which is capable of providing 15 hours of talk-time and a complete 1-month backup. 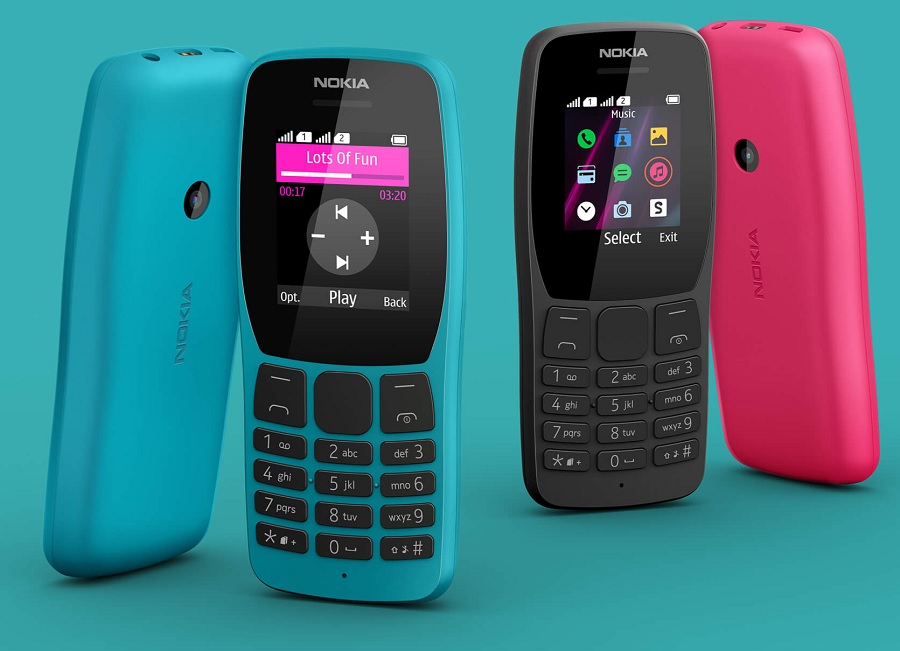 The functionality of the phone does not end here. The phone has an inbuilt FM radio and a flashlight. Nokia 110 also has given space for the fan-loved Snake Xenzia game. Apart from that, there is an 800mAh removable battery, which keeps the device running. With the battery on the play, the device can give around 14 hours of talk time, 27 hours of music playback, and a standby time of 18.5 days.

Nokia 125 comes with a 2.4-inch QVGA display. The body is made up of polycarbonate material and weighs 91.3 kg. The phone is powered by an unspecified MediaTek processor. The device features 4MB of RAM and 4MB of internal storage. The storage is not expandable but users can slot in two mini-sims at a time. 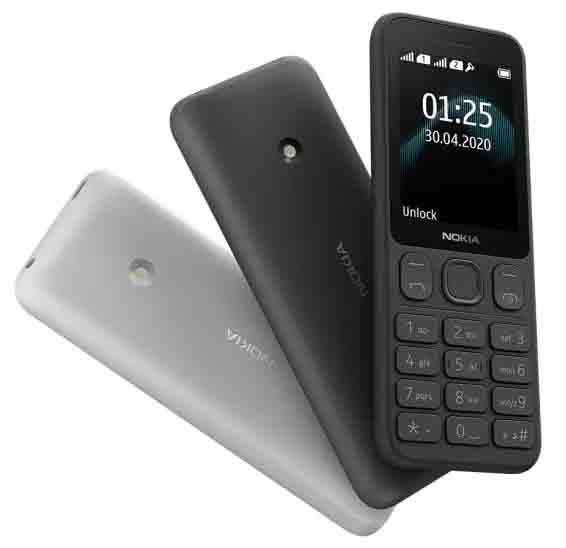 For multimedia, the phone comes with a wireless FM receiver. The Classic Snake Xenzia game comes pre-loaded. The LED torch is placed on the rear panel of the device.  It features a 1,040mAh user-replaceable battery that boasts 19.4 hours of talk time and 2.34 days of standby. Basically, Nokia 150 (2020) is Nokia 150 with multimedia features. It is lighter at 90.54 grams. Similarly, the two differ in the orientation of the numeric keypad. Other basic specs remain the same including the processor, RAM, internal storage, and even the battery. Nokia has added a microSD card slot that can be used to upgrade storage up to 32GB. It also comes with in-built MP3 and Bluetooth 3.0 support (for file transfer only). On the back, there is a VGA camera along with the LED flash.

Nokia 5310 is the successor of the renowned Nokia Xpress Music of 2007. It features a dual speaker and has dedicated music keys on the side of the device. With a feature like wireless FM, it is a perfect device to tune into your best station. 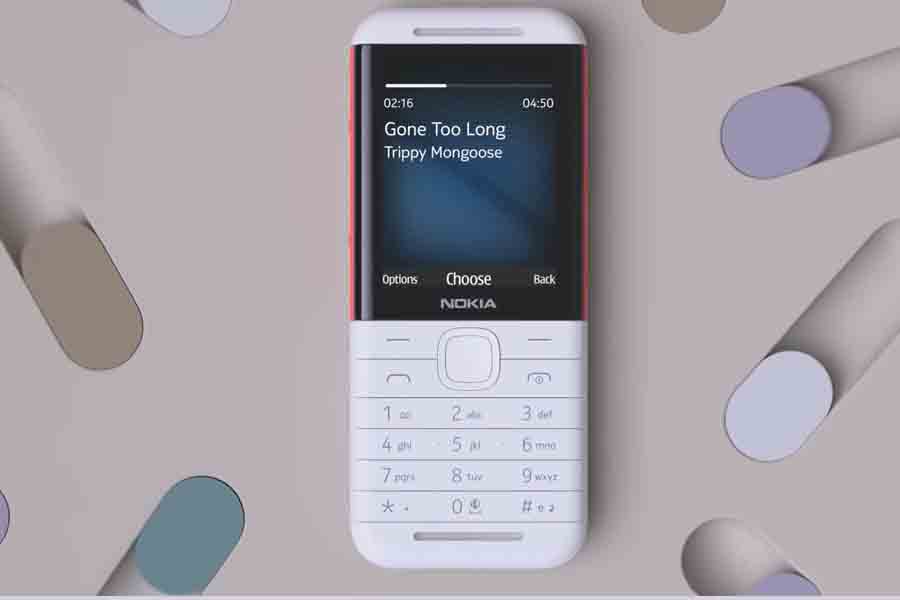 Other specs are quite identical to the Nokia 3310. It has the same 2.4-inch TFT display, a  1200mAh removable battery, and 16GB expandable storage. It runs on the Nokia Series 30+ Operation system and relies on 2G connectivity for the internet.

Back in July 2021, Nokia gave its classic 6310 phone a modern spin—roughly 2 decades later. The new Nokia 6310 features a 2.8″ TFT display contrary to the monochrome screen of its predecessor. There’s also a bigger 1,150mAh battery this time. Moreover, this dual-SIM bar phone hosts 16MB RAM and 8MB of internal storage. It also supports SD cards of up to 32GB. Running on Nokia’s S30+ operating system, the 6310 (2021) features wired/wireless FM Radio and 2G cellular connectivity. And of course, the classic Snake game comes pre-installed too. The phone is available in 3 colorways: Black, Green, and Yellow. At the back, you’re also getting a 0.3MP camera.

One of the cheapest Android smartphones you can buy right now is the Nokia C1 2nd Edition. And since it is an affordable smartphone, the specs are very modest as well. It features a 5.45-inch FWVGA+ display with an 18:9 aspect ratio.

With 1GB of RAM and a quad-core processor, it doesn’t have enough horsepower to run Android OS smoothly. Hence, the phone comes pre-loaded with Android Go OS, which is the lite version of the regular Android OS. 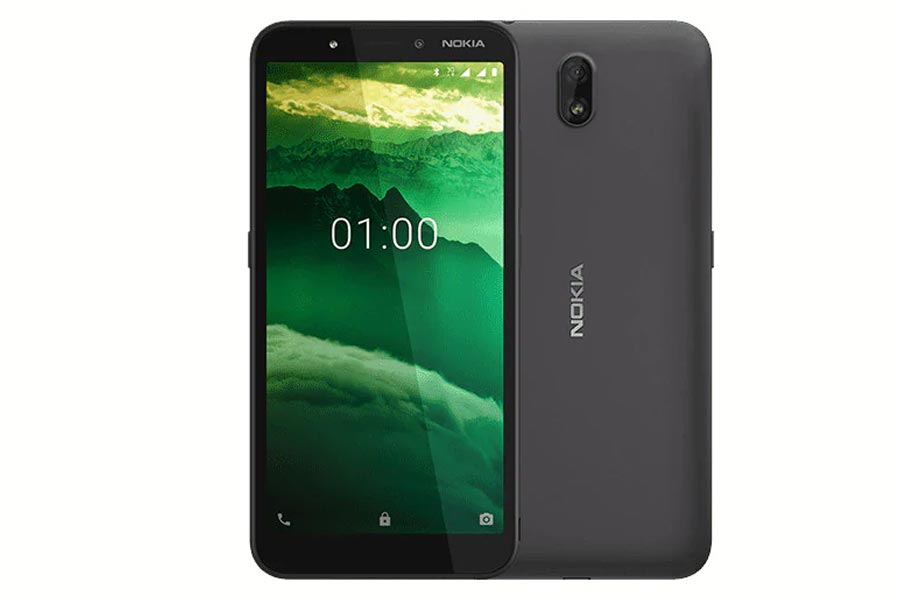 Similarly, it has 16GB of onboard storage with a dedicated microSD card slot. Powering the phone is a 2500mAh battery which isn’t a big one, but considering the display size and resolution, it will provide a decent endurance. On the optics front, the Nokia C1 2nd Edition has a 5MP camera on the front and back of the device.

Nokia C20 is the first C-series to launch in Nepal since HMD Global revamped its smartphone lineup earlier this year. It features a 6.5-inch HD+ LCD panel with a waterdrop notch that houses the 5MP selfie camera. There is another 5MP sensor on the back of the phone. The phone comes with Unisoc SC9863A, which is an octa-core processor with two clusters (4+4) of Cortex-A55 cores. The device ships with the Go Edition of Android 11. Users get to enjoy near-stock Android and HMD Global is promising quarterly security updates for two years. The phone packs a 3,000mAh user-removable battery.

Nokia C21 Plus sports a 6.5-inch HD+ LCD screen refreshing at standard 60Hz. The display is protected by toughened glass and you get a metal chassis as well.  The phone is powered by Unisoc SC9863A which is paired with 3GB RAM and 32GB of storage.

The phone flaunts a dual camera setup at the back, consisting of a 13MP primary and a 2MP depth sensor. Over on the front, there is a 5MP selfie camera. Powering ht phone is a 5050mAh battery with 10W charging.

The new Nokia C30 brings a few upgrades compared to the C20 which is also available in Nepal. It now hosts a towering 6.82″ IPS LCD screen—which is still HD+ though. Likewise, Nokia has doubled the battery size this time as the C30 is fueled by a massive 6000mAh battery. With this, the phone weighs around 237 grams. To compare, the new iPhone 13 Pro Max is marginally heavier at 240 grams. As a result, it’s plain to see that the company has targeted this phone towards those who favor content consumption and want a phone that can easily last a couple of days. Moving on, there’s also a fingerprint sensor at the back of the Nokia C30. There’s an upgrade in terms of cameras as well since it has a 13MP primary and a 2MP depth sensor. Powering the phone is the same Unisoc SC9863A chipset though.

Nokia G10 features a 6.5-inch HD+ panel with a 2.5D protection glass. The V-shaped notch on top houses an 8MP selfie shooter. At the back, the phone has a 13MP primary camera and two auxiliary lenses. 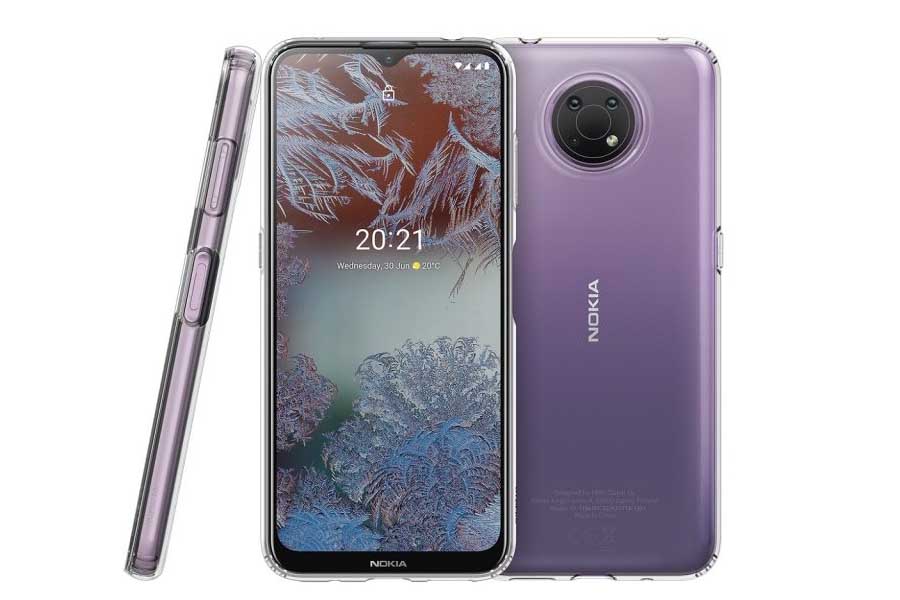 Nokia G11 Plus is a mid-year refresh of the G11. It carries forward the company’s new design language with the new rectangular camera bump. The phone has a textured back with a fingerprint scanner and has an IP52 rating.

Upfront there is a 6.51-inch HD+ LCD screen with a 90Hz refresh rate and 180Hz touch sampling rate. It is powered by the Unisoc T606 chip which is paired with 3GB RAM and 64GB of expandable storage. 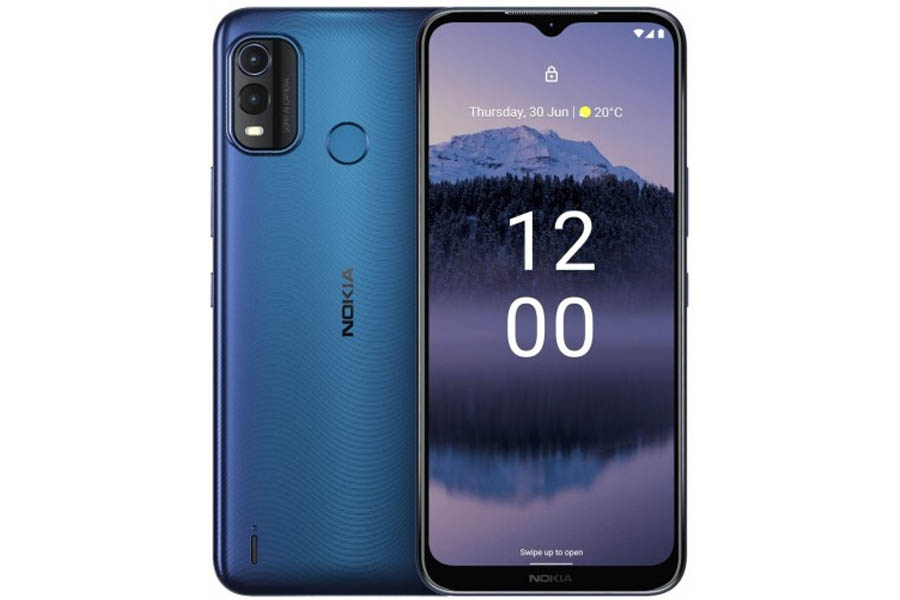 The dual-rear camera setup consists of a 50MP primary camera with a 2MP depth sensor. There is also an 8MP sensor for selfies and video calls. The phone gets its juice from a 5,000mAh battery and supports 18W charging.

Nokia G20 is the first device from HMD Global to launch in the Nepali market since the company modified the lineups and naming scheme of devices. The highlights of the new G-series are its battery backup and software. HMD Global is claiming up to three days of backup with G20’s 5,050mAh battery.

The device ships with Android 11 out-of-the-box and has been guaranteed two years of software updates. It will receive an additional year of security updates as well. As for the specs, it features a 6.5-inch HD+ panel with a V-shaped notch for the 8MP selfie camera. Running the show underneath is the Helio G35 chipset. It is coupled with 4GB RAM and 64GB internal storage.

Nokia G21 is the successor to G20 and it does bring some notable changes. First is the addition of 90Hz refresh rate. The phone features a 6.5″ IPS HD+ screen that can toggle between 60Hz and 90Hz. Likewise, it also supports HD playback on Netflix.

Under the hood, Nokia G21 packs Unisoc T606, which is paired with 6GB of RAM and 128GB of internal storage. The phone houses a triple camera setup including a 50MP primary, 2MP depth, and 2MP portrait sensor. 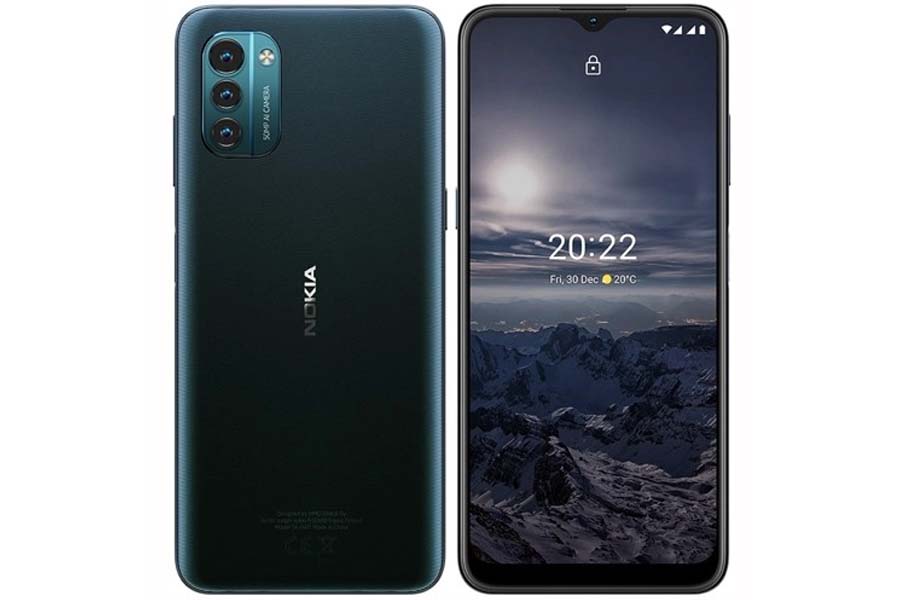 Fueling it is a 5,050mAh battery with 18W fast charging support. The phone runs on Android 11 out of the box with Nokia already promising two major Android updates.