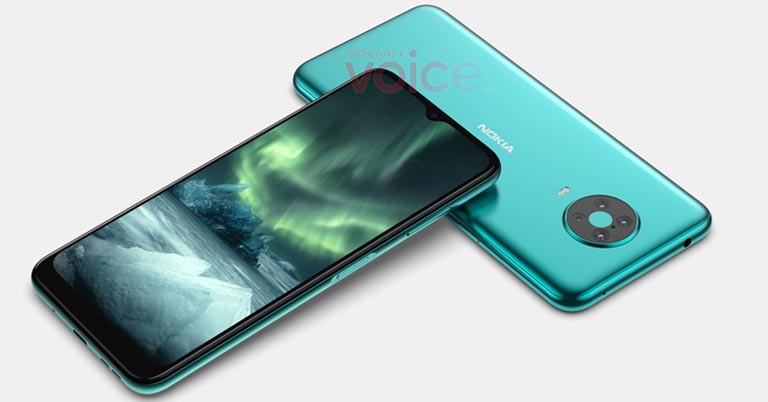 According to a report, we might see Nokia launch as many as three smartphones in the next few months. First in the pipeline is the budget-oriented Nokia 1.4. Then it will be followed by Nokia 6.3 / 6.4 and Nokia 7.3 / 7.4. Let’s take a look at the specs, features, expected price, and availability of upcoming Nokia smartphones (2021 Lineup).

Out of the three Nokia smartphones, two will support 5G connectivity. Nokia will make use of Snapdragon 480 and 690 for the two phones respectively. All of the three phones will ship with stock Android 10 and they will also have a dedicated Google Assistant button. Similarly, the camera setup may have the ZEISS branding.

Nokia 1.4 will be the successor to the last year’s Nokia 1.3. The device will come with a 6.51-inch LCD panel with an HD+ resolution. Moreover, it will feature a quad-core processor with a clock speed of up to 1.3GHz. On the memory side of this, Nokia 1.4 is rumored to come with 1GB of RAM and 16GB of internal storage.

It will have dual Nano-SIM slots and a dedicated microSD card slot. In terms of connectivity, it will come with support for 4G LTE, Wi-Fi, and Bluetooth. The phone will also have a fingerprint scanner for biometrics.

It is still unclear if Nokia will stick to the expected 6.3 moniker or skip it for 6.4 for the successor to the 2019’s Nokia 6.2. We have already seen such a jump in the naming convention in some Nokia phones launched in 2020. Irrespective of the moniker it will have, the successor to the Nokia 6.2 will feature a 6.45-inch display. At the back, the device will flaunt a quad-camera setup arranged in a circular module. It will most likely consist of a 24/48MP primary camera, 12MP ultra-wide camera, and additional 2MP sensors. There will be a 16MP sensor on the front for selfies. Unlike its predecessor, the Nokia 6.3/6.4 will have a side-mounted fingerprint sensor.

The latest rumors suggest that the phone will be powered by the new Snapdragon 480. It’s the cheapest 5G chipset in the Snapdragon lineup.

Moving on, Nokia 7.2 / 7.3 will be powered by Snapdragon 690. It is the only chipset in the Snapdragon 600 series to feature a 5G modem. The device is likely to feature a 6.39-inch display with a punch-hole cutout for the front camera.

The rear camera setup on the back will consist of a 48/64MP primary sensor accompanied by a 12MP ultrawide sensor and two additional 2MP sensors. The camera setup will have the ZEISS branding as well. Other details of the phone are still unknown.

Of all the upcoming smartphones, Nokia will initially launch the Nokia 1.4. The launch can take place as early as February. Similarly, the Nokia 6.3/6.4 is expected to launch in late Q1 or early Q2 of 2021. Finally, the Nokia 7.3/7.4 will be launched around February or March.