Home 5G Snapdragon 690 5G announced: Lots of “firsts” for the 6-series of SoCs 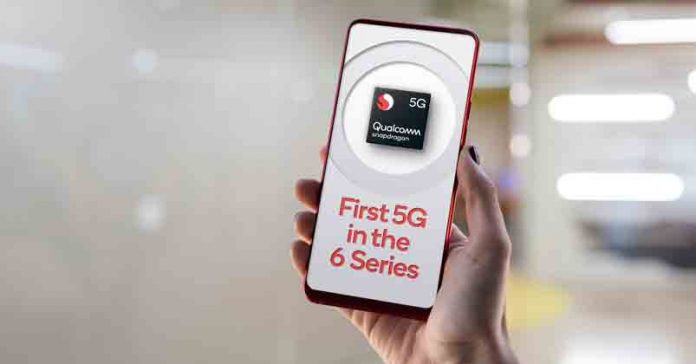 Qualcomm announced Snapdragon 865 back in December last year, which paved the way for OEMs to incorporate 5G technology into their upcoming smartphone. But soon, there emerged a problem. This new 5G chipset turned out to be way too expensive even for a flagship chipset. To improve the situation Qualcomm has now announced Snapdragon 690, which is believed to bring the 5G in smartphones under $300. Let’s take a look at what Qualcomm is offering in the Snapdragon 690.

Snapdragon 690 is the first chipset in the 6-series to feature an integrated 5G modem. Up until now, 5G connectivity was reserved for more expensive 7-series and the flagship 8-series. But it isn’t the only upgrade that Qualcomm has brought.

Talking about the architecture, the new octa-core chipset is based on the 8nm LPP process which is an improvement over Snapdragon 675 that was based on the 11nm process. However, SD 690’s closest competitor, the Dimensity 820, is based on a more efficient 7nm process.

Qualcomm has stuck to a big.LITTLE configuration with two power cores and six efficient cores. For the former, the company has gone with the latest Kryo 560 (which are the stock Arm Cortex-A77 cores) clocked at 2.0GHz. Similarly, six Arm Cortex-A55 cores (@1.7GHz) are being used as efficient cores. Qualcomm is claiming there is a 20% improvement in performance compared to the Snapdragon 675.

The Cortex-A77 cores do have better Instruction Per Cycle (IPC) the Cortex-A76 cores. However, Snapdragon 690 won’t be making best out the specs because of the lower frequency. We don’t expect it to outperform the SD 720G even though the latter has Cortex-A76 cores (@ 2.3GHz). Adding further insult to the injury is the fact that the Dimensity 820 packs not two, but four performance Cortex-A76 cores clocked at even higher 2.6GHz frequency.

For the GPU, Qualcomm has used the new Adreno 619L which is claimed to come with a 60% performance boost over Adreno 612. If you were expecting the Snapdragon Elite Gaming technology to make an entrance as well, it won’t be available in the 690. It is only for G-series and 8-series chipsets. However, SD 690 does support Vulkan 1.1 API and Physically Based Rendering (PBR).

Like mentioned earlier, it is the first 6-series chipset to support 5G connectivity. It has been made possible because of the X51 modem that’s integrated on to the chip. Unfortunately, it misses out on mmWave 5G support. The Snapdragon 690 supports sub-6Hz for both SA and NSA band. The maximum downstream and upstream speed has been quoted at 2500Mbps and 1200Mbps, respectively. The new Spectra 355L ISP (Image Signal Processor) can support up to 192MP cameras or 48MP capture with MFNR (Multi-Frame Noise Reduction) enabled. In a multi-camera setup, it can support up to 32MP + 16MP dual cameras. It is also capable of 4K UHD video capture.

In terms of display, Snapdragon 690 supports 120Hz display in FHD+ resolution or 60Hz in QHD+. It features 10bit color depth and support for HDR10 and HDR10+. The chipset is also Wi-Fi 6 ready and packs in the new 5th-gen AI Engine, which is reportedly 70% faster than its predecessor. It also has support for dual-channel LPDDR4x at up to 1866MHz.

We can expect 5G smartphones with Snapdragon 690 processor to be available in the market starting from Q2 2020. As of now, Nokia, LG, Motorola, Sharp, and TCL are all working on phones with the Snapdragon 690. These upcoming smartphone will retail for about $300 or even less.