Wired earphones are almost extinct as the industry has slowly and steadily moved on to its wireless counterpart. Here, while the TWS earbuds are more convenient seeing how they completely get rid of wires and with it the nightmarish tangles, they’re comparatively more expensive and some cheap options don’t offer a decent audio reproduction. However, there’s a middle line between wired and wireless earphones – neckband headphone that balances price and quality. Recently, OPPO launched the Enco M31 Bluetooth headphone in Nepal, and in terms of sheer audio quality, I honestly feel like it’s one of the best for the price. Let’s find out more about the OPPO Enco M31 in this review.

OPPO Enco M31 looks like any other rubberized neckband headphone out there in the market – except for this dope color scheme. Available in either Black or Green option, the latter looks really dope. A little dark green infused with bronze, man it looks cool on your neck. Some people may not like having to deal with wires in the market saturated by TWS earbuds but if you don’t have any problem with the design choice, you’ll be taking home a much nicer sounding Bluetooth earphone. Because of its form factor, neckband headphones can cram in bigger battery & other better audio technologies while bringing down the cost of production. 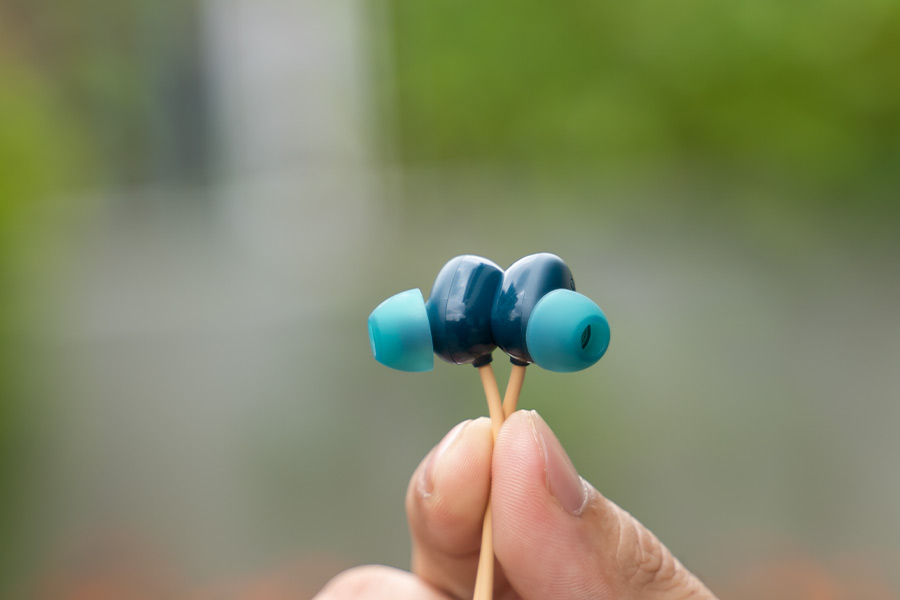 Having said that, the cables themselves on the Enco M31 could’ve been a little shorter, to my fit at least. Due to this, they would get in my peripheral whenever I’d be looking downwards. Of course, this design choice is for a universal fit but maybe OPPO could somehow come up with a retraction mechanism in its successor. The silicone earbuds themselves fit nice in the ears (you also get a couple of extra pairs to get the best fit). They feel snuggly and didn’t notice any sort of discomfort even after hours of continuous playback.

Something better would’ve been nice

While the earbuds fit well and all, I wish they had some comparatively tougher material near the tip. Instead, I’d naturally try to put it in the ears or take it off by placing my fingers on the feeble wires which feels a little insecure, and non-durable in the long run. Obviously, you can use the earbuds themselves for this purpose but this felt a little uncomfortable to me.

The earbuds also attach magnetically like many other neckband headphones, which is also how the Enco M31 turns off. There’s a control center alongside the USB Type-C charging port on the left side for volume, and other controls. Okay, I’m now gonna quote OPPO on one of the finest tech jargon you’re ever gonna come across an audio product – you ready? According to the company, Enco M31’s “liquid silicone rubber surrounds a shape-memory metal core that never forgets the shape of your neck”.

What this basically means is that the rubberized neckband retains the shape you’d originally set after placing it on your neck for the first time. But that wording sure makes it sound like something way fancier than what I just described. Finally, it is also IPX5 rated against water splashes but this means there is no dust protection. So, if you’re thinking of buying one for yourself, make sure to not take it somewhere dusty.

Moving on to pairing, the OPPO Enco M31 features Bluetooth 5.0 wireless connectivity. And just like most popular OEMs, there is an OPPO exclusive feature on this one as well. For first-time pairing, all you gotta do is press the multi-function button for about 3 seconds after which the headphone becomes visible to phones, tablets, or other Bluetooth-capable devices.

And after successfully completing the first pairing, certain OPPO smartphones running ColorOS 7.0 or higher are fortified by the quick pairing functionality. With this, the entire process of connecting the headphone to your phone becomes much faster. OPPO says the Enco M31 has 10 meters of wireless range but that, unfortunately, didn’t translate well during my review as the headphone would start having trouble maintaining the connection with the phone within distances no longer than 5 meters with loads of obstacles in the middle.

Getting to the controls, as I said earlier, the control center resides on the left side of the neckband. It has a volume up, a volume down, and a multi-function button. This same module also includes a microphone and an LED indicator that determines the Enco M31’s battery level too. The volume buttons are pretty much self-explanatory and you can either single press them to increase or decrease the sound level. Similarly, long-pressing the volume up button skips the currently playing track whereas long-pressing the volume down buttons gets you back to the previous track. 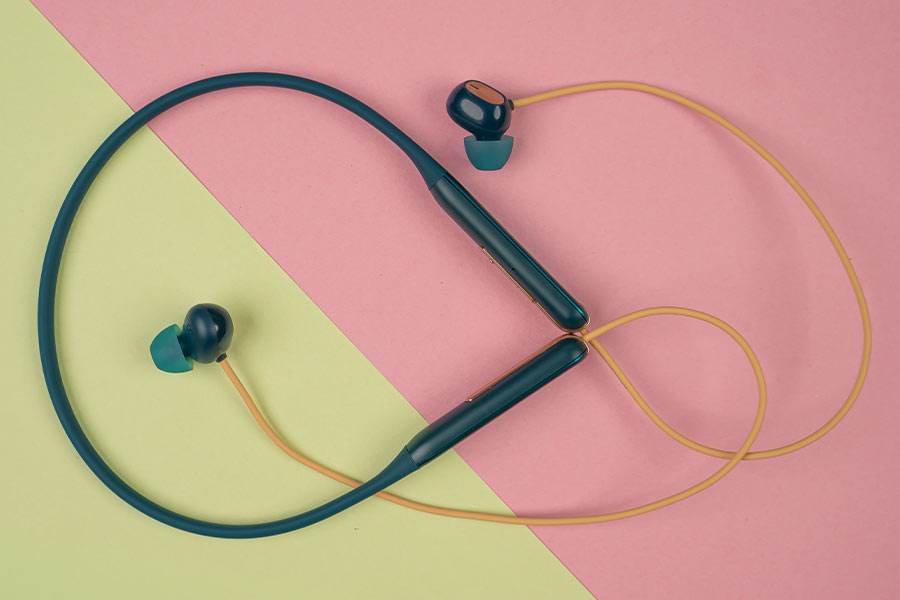 However, this action takes way too long than you’d like – almost a second. Maybe OPPO could fix this with a firmware update because it feels unnaturally lengthy. Then there’s the multi-function button. On a single press, it resumes/pauses the audio on a single press. Similarly, double-pressing the button will toggle between the standard “Balanced” and “Bass” mode (more on that later). Additionally, if you triple press the same button, it will trigger the voice assistant on your phone.

And just like how long it takes to skip or go back to a track, the triple tap action would sometime take too long to activate, and sometimes, it would trigger the audio mode instead. For instance, I had experienced this on a multiple occasion when I’d try to summon Google Assistant by triple pressing the button with a little speed, but the Enco M31 would rather switch between the Balanced & Bass audio modes. Also, all the three buttons haven’t been etched properly like how they should be. Due to this, it becomes a little confusing to determine which button you have your hands on, without directly looking at it.

Now, let’s talk about the audio quality of the Enco M31. Spoiler alert: it is really good. It has a single 9.2mm full-range dynamic Titanium drivers that can reproduce up to 40kHz audio frequency under Sony’s LDAC codec or 20kHz under the standard AAC/SBC codec. I was so eager to test out how the LDAC audio coding performed on the OPPO Enco M31 and during my review, I’m glad to report that it didn’t disappoint.

Capable of transmitting audio at up to 990kbps at 24bit / 96kHz, the details you can notice on a track is fascinating. It is also Hi-Res Wireless Audio certified (thanks to LDAC) making it one of the few devices in the Nepalese market to have it. Compared to regular headphones, the ones with Hi-Res certification can deliver a sort of lossless audio at higher sampling rates than other standards. However, setting it up on my phone was a pain as every single time I’d reconnect the Enco M31 to my phone, I would have to manually select LDAC under the “Bluetooth Audio Codec” menu under the Developer Options. So, many times, I would just listen with the regular AAC/SBC codec instead.

But once again, I have to say – if you want to enjoy the best audio possible from this headphone, you’re definitely gonna want to turn on the LDAC option. As I discovered during my review, the OPPO Enco M31 sounds noticeably better with a rich listening experience under almost every genre of music with LDAC. Turning on the dedicated bass mode, I was able to enjoy bass-heavy music like “Spoiler” by Hyper without any issues like muddy bass or bass bleed. When listening to lofi-hiphop tracks like “Luv (Sic) pt. 3” by Nujabes ft. Shing02, the vocals aren’t overshadowed by the beats with really pleasant mids and highs too. Besides bass, listening to practically every other type of music on the Enco M31 was a bliss considering how OPPO’s other TWS earbuds – Enco W11 and W31 performed. Obviously, these are either slightly more or less expensive than M31 but the latter was able to absolutely trounce the two in terms of audio quality. Likewise, loudness wasn’t a problem either as it gets plenty loud for your average listener.

On the other hand, when switching to the balanced mode, the headphone gracefully dials down the bass and achieves a higher degree of audio clarity instead. For example, I listened to “Desolation Row” by Bob Dylan and “Castle of Glass” by Linkin Park which is of Classic Rock and Hard Rock genre respectively. And they sounded terrific, while I didn’t notice a single instance where the audio from instruments derailed the artist’s voice itself. So as you can tell by now, the Enco M31 is one heck of a champ when it comes to the pure and clear listening experience.

Now moving on to the call quality, it’s not as great as the music. OPPO says with its AI Uplink noise-reduction tech, you can seamlessly make or receive calls without needing a quiet spot but its single microphone struggled to keep that promise. I don’t mean audio during calls is downright miserable. It sounds good enough in a quiet room but when the ambient noise starts taking its form, don’t expect a similar level of phone call experience. More often than not, I’d get complaints from the receiving end about how my voice wasn’t clear enough for them to hear. Here, I must point out that all most of these call quality tests were conducted outdoors in a fairly noise-laden environment.

Finally, let’s get into the battery life. OPPO Enco M31 has an 88mAh battery and it gives off a varying level of endurance depending primarily on the audio codec you’d prefer to listen. The advertised level of endurance under 50% volume is up to 12 hours under normal AAC/SBC codec which is reduced by 1/3rd to just 8 hours under LDAC. To some extent, my test corroborated with OPPO’s claim. 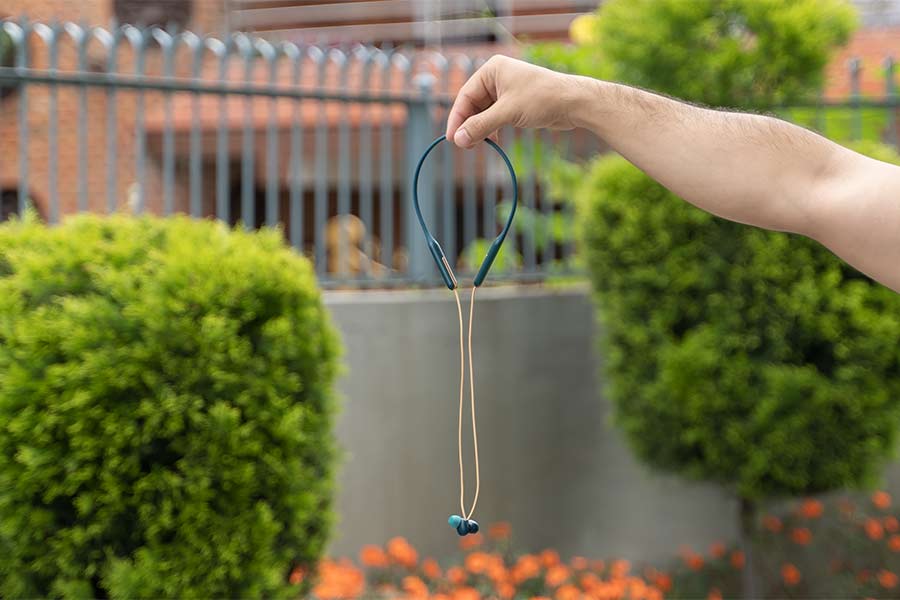 I generally prefer listening to music on 70 – 80% volume. With this, I got about 10 – 10.5 hours of playback on AAC/SBC and about 7 hours on LDAC codec. The headphone charges via a USB Type-C cable which takes about an hour to juice it up from 0 to 100%. If your phone runs on Android 10 or above, the notification panel itself would indicate the exact battery level. However, its LED indicators do a fine job as well. It glows green when the charge is full and starts slowly flashing red once you’ve reached a low battery level. Not as intuitive as the aforementioned technique, but still.

Let’s sum up this review of the OPPO Enco M31. Without a shred of doubt, I can confidently say that this is one of the best neckband Bluetooth headphones you can buy right now in Nepal. Its closest competitor (in markets like India), the OnePlus Bullets Wireless Z isn’t available here; but they’re neck-on-neck when it comes to audio quality. Anyway, the Enco M31 is for those who want to enjoy great audio and want the best value for their money. It doesn’t have those fancy low-latency mode and therefore doesn’t appeal to the gaming crowd. But if you’re someone who can look past that, this one’s a definite buy.