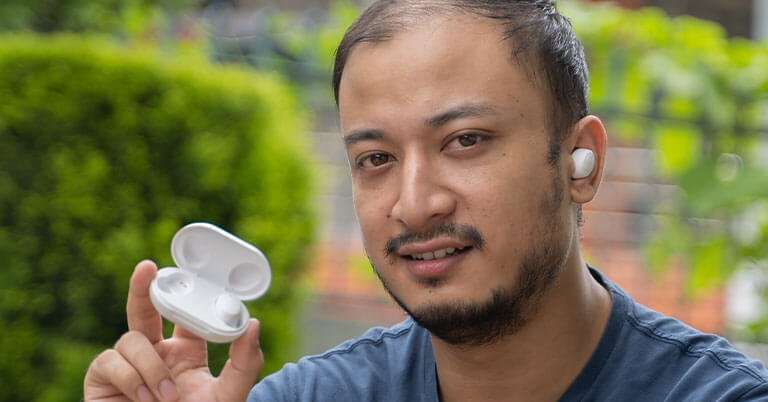 With the wearable market blooming in Nepal, more and more OEMs are now bringing a variety of devices in the country. Recently, OPPO launched a bunch of new Bluetooth earbuds in Nepal, one of which is the Enco W11. It is the entry-level TWS earbuds from the company which has a distinctive look compared to other AirPods copycats. Let’s find out more about the OPPO Enco W11 TWS earbuds in this review

Starting with the design, the OPPO Enco W11, fortunately, doesn’t follow Apple’s AirPods bandwagon. While basically every other inexpensive Bluetooth earbuds look the same, the W11 is a breath of fresh air. It is an in-ear TWS earbuds with silicone ear tips at the end. As expected, the build material is plastic while the outer surface of the earbuds has a glossy finish. For a tighter fit, OPPO also ships a couple of different sizes of ear tips which is great. Usually, the medium size fits my ears but I had to switch to a large size on the Enco W11. With this, passive noise isolation was quite good. The earbuds are fairly lightweight as well since they weigh just 4.4 grams each. Having said that, I found Enco W11’s fit to be a little less than satisfactory. Even with the lightweight build, I experienced discomfort when using it for a long time. And trying to adjust the buds for a tighter fit would end up hurting the ears. At the end of the day, what I mean is the Enco W11 is a little loose in the ears and feels uncomfortable after wearing it for a while. Furthermore, they’re also IP55 dust and water-resistant so you can take the Enco W11 in jogs or under slight drizzles of rain with no worry.

Moving to the charging case, it is heavily inspired by Samsung’s Galaxy Buds and Buds+. It is oval-shaped and has a glossy finish like the earbuds. You can notice the OPPO branding up top while the notification LED lies near the opening window of the case. Likewise, the USB Type-C charging port resides at the back. The buds fit magnetically inside the charging case via the POGO pins. While the strength of their magnetism isn’t that strong compared to other costlier TWS earbuds, I don’t mind that at all. Attaching the buds in the case also charges them – as expected.

These earbuds support Bluetooth 5.0 connectivity. When it comes to pairing the Enco W11 with your phone, it becomes visible to Bluetooth capable smartphones, tablets, or PCs once you open the charging case; and all you gotta do is select the Enco W11 from your device’s Bluetooth settings. And after pairing it for the first time, W11 automatically recognizes the previously-paired devices for a quick connection. 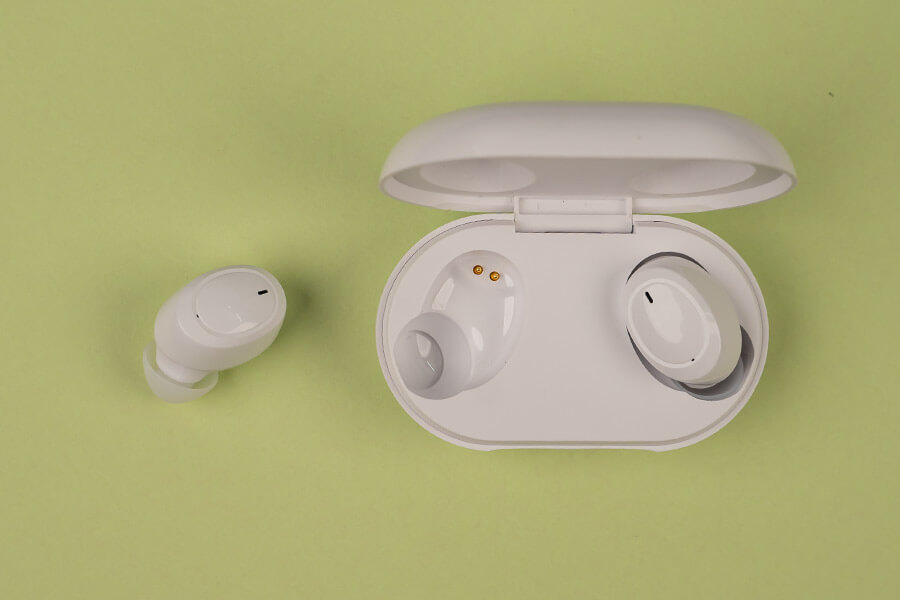 OPPO says the Enco W11 has 10 meters of Bluetooth range but my review unit started losing connection with my phone when moving just 4 meters away. That may be troublesome for those who are planning to use it indoors with the connected device far from you. However, most of us will probably be putting them on our ears alongside our phone/laptop by our side so the small range isn’t a problem at all.

Getting to the controls, Enco W11 has capacitive touch control on each earbud. And they’re quite intuitive as you can control practically every audio settings using those sensors. Yet, you won’t be able to customize them to your liking and will be stuck with what OPPO has shipped by default. Here, a single tap on either earbud lets you play or pause the audio. To skip or going back to a track is done by double-tapping the right & left earbuds respectively. You can also accept or hang up calls by double-tapping the earbuds.

Furthermore, there’s also a volume control option on the Enco W11. Pressing & holding the right earbud increases the volume while lowering the audio level is fortified via the left. Lastly, triple tapping either of them summons the digital assistant like Google Assistant. See what I said about the intuitive controls? Additionally, they work almost flawlessly even with the gentlest touch so you won’t need to hit yourself in the earbuds like how you would on other TWS earphones with the AirPods-like stemmy design.

Even though that’s very impressive, the touch latency was quite distracting and at times annoying. There’s about 400ms of latency on each click/tap. Similarly, the earbuds fail to correctly recognize multiple touch input sometimes. For instance, when double tapping the capacitive sensor with a little speed to skip or go back to the previous audio, the Enco W11 only registers a single click and then proceeds to play/pause the music instead.

Now let’s get to the most important of any TWS earbuds – the audio. Here, the Enco W11 has 8mm drivers and features binaural simultaneous Bluetooth transmission. What the latter means is that the audio signals are simultaneously delivered to the left & right earbud, thus resulting in a synchronized listening experience. Its frequency response range covers the entirety of the human hearing range i.e. 20Hz – 20 kHz. In terms of audio codecs, the Enco W11 only supports the most basic SBC and AAC formats only. 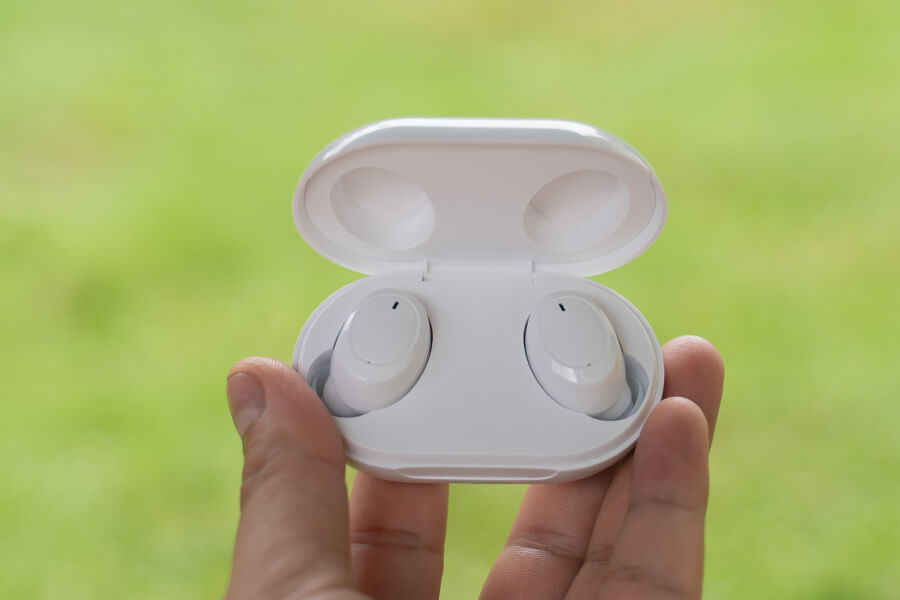 And the audio output… yeah, it’s not that great. But keeping the price in mind, I reckon that’s acceptable. In low to mid-volume, the sound quality is fine though the same cannot be said when sliding the volume to max. When listening to music with various instruments playing at a time like those under the orchestral rock genre, the vocals get subdued and is overpowered by the instruments instead. The Enco W11 just couldn’t seem to properly process audio with different ranges of audio frequencies playing simultaneously.

I would also advise against going full volume since the audio gets quite shrieky which is harmful to the ears. I listened to some hard rock and classic metal songs like Led Zeppelin’s “Whole Lotta Love” and Tool’s “Fear Inoculum” and they sounded pretty unbearable at max volume.

When it comes to bass, OPPO is advertising the Enco W11 with an “enhanced bass” feature, but I didn’t hear it. I don’t mean to say it’s audio reproduction is entirely flat as there is a hint of bass here and there. However, they feel unnatural and are really muddy. I played “Sunflowers” by saib. and “Tadow” by Masego & FKJ. Even with the tightest fit possible, I couldn’t enjoy a pleasant level of bass on these songs. Despite this, Enco W11 is more than fine for listening to podcasts, different kinds of YouTube videos, or non-orchestral & non-bass-heavy audio.

Call quality on these earbuds isn’t that great either. Albeit there is a dedicated noise reduction feature, people on the receiving end of my call complained about how my voice sounded like something coming out of a large, empty room. Likewise, at times, the sound output would also get really unclear. It has a single microphone, so that may have contributed to the apparent poor call quality.

Finally, let’s talk about battery life. Each earbud has a 40 mAh battery while the charging case holds 400 mAh of charge. Enco W11’s advertised battery life is 5 hours from the earbuds and up to 20 hours with the charging case when listening in 50% volume. And that more-or-less matched with my usage. 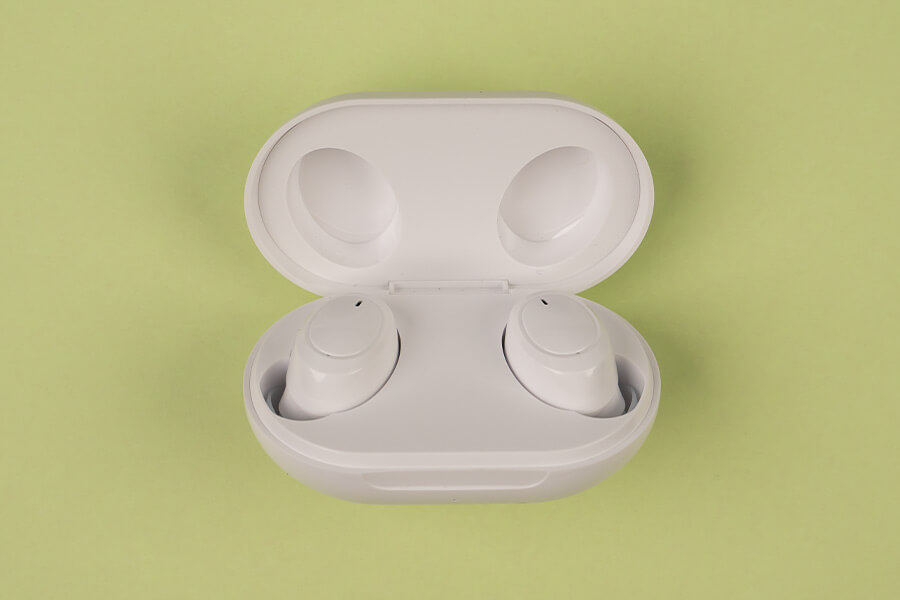 I got around 3.5 to 4 hours under 70 – 80% volume. Similarly, you can get 1 hour of playback time with just 15 minutes of charge. Fully charging the earbuds takes about 2 hours via the Type-C connector.

All in all, the OPPO Enco W11 is a decent pair of TWS earbuds in the sub-3K market in Nepal. It has a sleek design and looks very intimate in the ears. You also get a couple of extra silicone tips inside the box itself which is really nice. Its capacitive sensor has really intuitive control letting to tweak around with every possible setting you could ask for. The audio output is decent as well, especially in low and mid-volume.

As expected, its bass reproduction isn’t that great and definitely won’t be the first choice of those who primarily listen to EDM, dubstep, lo-fi, tropical house, and other similar genres of music. Call quality is acceptable but time and again, the audio on the receiver’s end would get unclear. So, if you’re looking for cheap TWS earbuds with a sleek design and a reasonable sound quality, the OPPO Enco W11 could be a good option.