As soon as we hear Oppo, the first thing that comes to our mind is a selfie. And while Oppo stays true to its tradition of being one of the leading brands of the selfie phones, it also quickly refashions to the new design trends. At a time when the Notch design and bezel-less displays are in the trend, Oppo has released its new flagship, the Oppo F7. Being a selfie camera it does have a great 25MP camera but apart from that what else does it have in stores? Let’s find out in this review.

Let’s start with the design. The Oppo F7 has a gorgeous and elegant design. The front of the phone looks similar to iPhone X (Read review) except that Oppo F7 is larger in dimension than iPhone X. The back of the phone is plastic and is prone to get fingerprints easily. It often slipped from my hand and I had to clean the back frequently when not applying a case. Now the plastic back might be a letdown but the feel and finishing of the device make it look like glass so I assure it makes up to it. 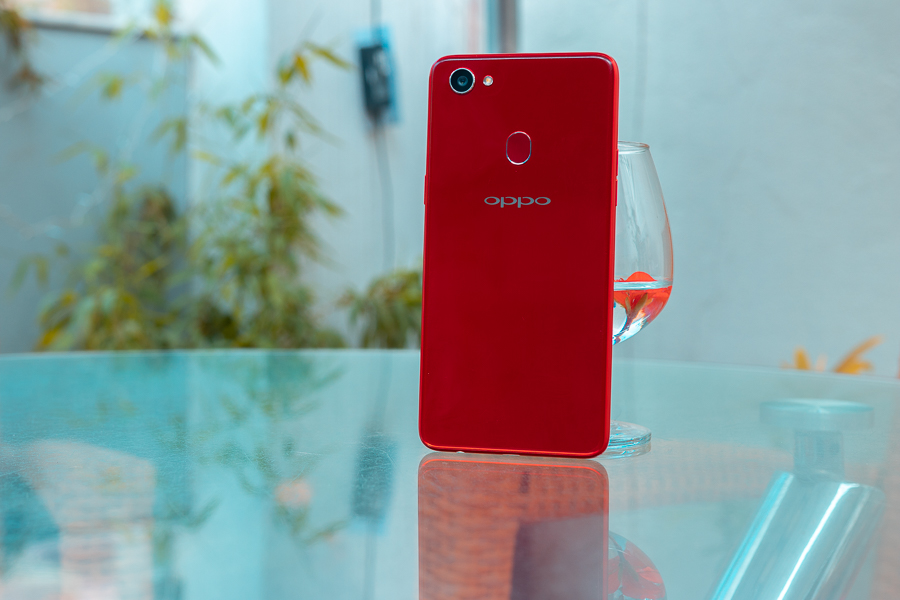 What I like is that the phone feels more premium than any other Oppo phones and feels great in hand. The Vivo V9 (Read review) which has similar weight and thickness but the F7 yet feels much lighter and slimmer in hand. 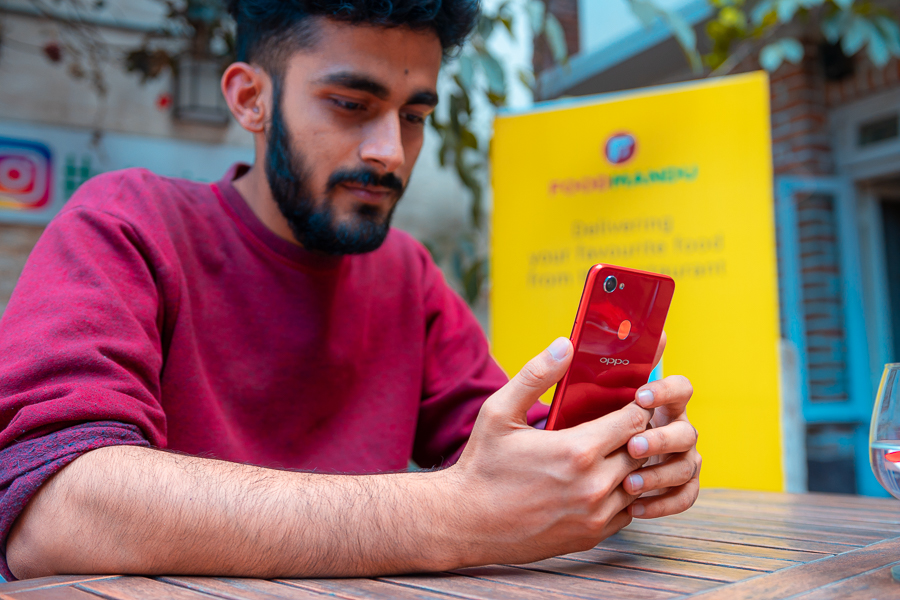 The Oppo F7 has a dimension 156 x 75.3 x 7.8 mm and weighs about 158g. The standby volume keys are on the left side while power button along with dedicated trays for dual SIM and microSD slot on the right. On the bottom there is a micro USB, speaker, microphone and 3.5mm Headphone jack. The 16MP rear camera is placed at the back with the fingerprint sensor. 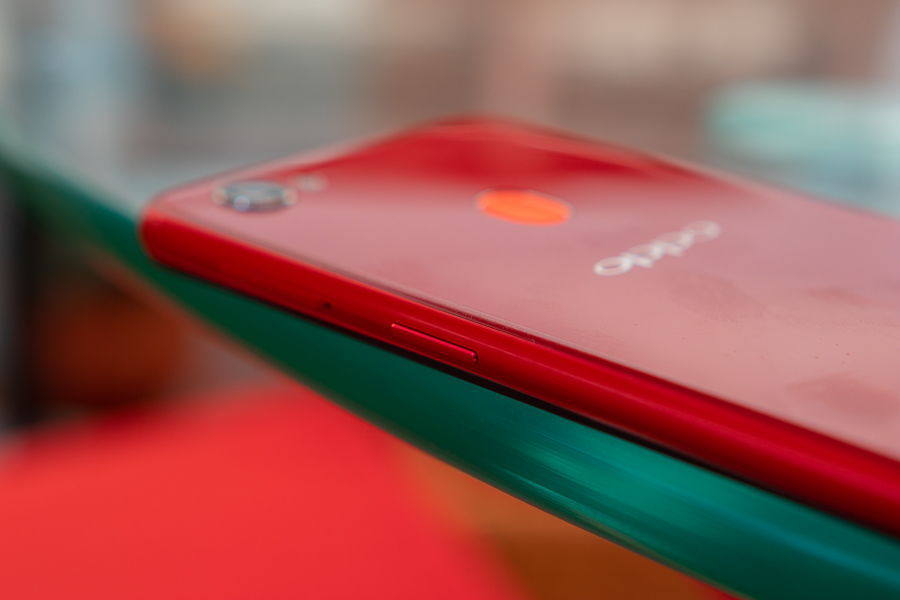 A tiny notch on the top of the screen houses a 25 MP Selfie camera, earpiece and sensor. However, it lacks a notification light. This isn’t a big problem but few people do love it. The speaker is quite loud & sharp. 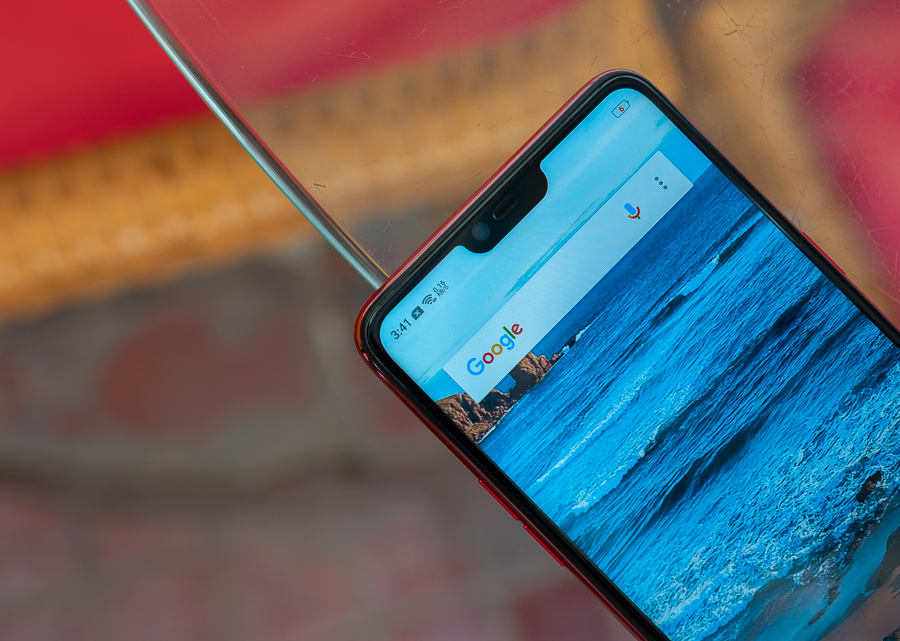 The IPS LCD display has a full HD Plus resolution with an unusual 19:9 aspect ratio. The display is sharp and clear with an excellent contrast ratio. However, it is not as bright as I expected, so you need to put the brightness level at 100% when you are outdoors on a bright sunny day. 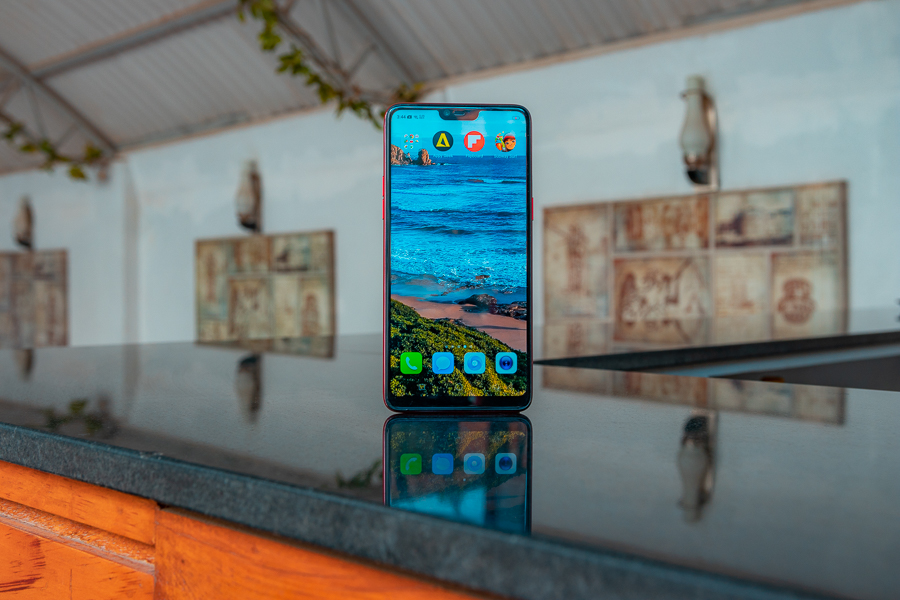 The display is a treat to watch with the minimalistic bezel and the Full View display. It also has ‘night mode’ which helps to filter out blue light to protect from visual fatigue. With that, there is ‘Night shield’ in the display settings that can be scheduled. Also, it is protected by Corning Gorilla Glass 5 right out the box. Oppo F7 has on-screen navigation buttons creating a slim bezel at the bottom. The 6.23 display is difficult to use with a single hand. But there are features like one-handed mode & assistive ball to make it easier to use with one hand. There are other many helpful features that you can access the built-in app ‘Tips’.

Oppo F7 houses the MediaTek Helio P60 chipset with 4GB RAM. Now there’s a belief among people that Qualcomm is better than MediaTek but that is not the case anymore and the Oppo F7 proves this.

The phone works great during normal usage of internet surfing, listening music & using social media. Even while multitasking apps like Snapchat, YouTube, and high-end games, the phone didn’t slow down or lagged. Not even once. I also tried multitasking high-end games like PUBG Mobile, Shadowgun Legend and other games like Piano tiles also Facebook. However, it did not crash and switching between the apps was quite smooth too.

The F7 has a built-in ‘Game Acceleration’ which automatically accelerates the performance of the phone when you open a game. Playing games was a great pleasure. The full display with and great performance made the experience very enjoyable. The temperature didn’t rose so much while playing game low-end games. But it did heat up a little after 15-20 minutes of switching between high-end games. So I would say the performance of F7 is amazing.

Talking about the software department, the phone boasts on Android 8.1.0 Oreo. It does have a clunky UI but a smooth interface and I love the animation. There are many pre-installed apps like WPS office, iReader which can be uninstalled if unwanted. It has a built-in step counter as well which keeps track of our health. Theme store that allows you to download a variety of themes and wallpapers. The phone manager has features like cleaning storage, privacy, virus scan, and so on. The noticeable change is that the control panel is now accessed by swiping it down from the top. It also has many features including split screen, flashlight, and one-handed mode and so on.

Moving on to the main highlight of the F7, the 25 MP AI enabled selfie camera. Oppo has claimed that this version of beautifying tool is better, and we put that to the test with a mole testing. Certainly, this time, the smartphone passes that test as you can see from this image sample.

Normal Vs Beauty Mode
1 of 2

However, sometimes it tends to turn you into a wax doll with too much of beauty mode in place. But even though I am not a selfie queen, taking selfie was fun. The selfies are good even in low lightings. The pictures taken are vibrant, clear and have great saturation. The camera has many features like HDR, Super vivid mode and so on.

Now, the 16 MP rear camera is no less amazing. The rear camera is a single camera at the back of 16MP with a wider f 1.8 aperture. I did miss dual cameras on the back. Well, yeah, I am not that into taking portrait mode pictures, but still, the secondary lens could have been utilized for a monochrome lens at least. I can say that the single camera doesn’t offer a great portrait shot compared to the one from dual cameras. You can see this comparison shot between the Vivo V9 and Huawei Nova 3e. Nonetheless, the normal pictures taken under well-lit conditions are crisp, sharp, vibrant and clear. With the super vivid mode and HDR mode, I clearly got some amazing pictures. The Super vivid mode brings out every color so beautifully. Though the camera does have a hard time in differentiating scenes and objects.

With a bright aperture, I thought the low light images is going to be stellar. However, with the lack of stabilization, most of the lowlight shots were blurry, noisy and lacked detail.

An additional feature is ‘Expert mode’ which allows you to adjust WB, ISO, shutter speed and focus as per your choice. It’s simple and easy to use. Here are some pictures taken in different ISO, aperture and exposure time.

Overall, the cameras both front and back are great for pictures. However, I can’t say the same about the video. It lacks any kind of stabilization, so the videos come out shaky with subpar dynamic range and contrast.

The fingerprint and face unlock of Oppo F7 in a lightning-quick span.  It takes less than a second to unlock and I love that about it. 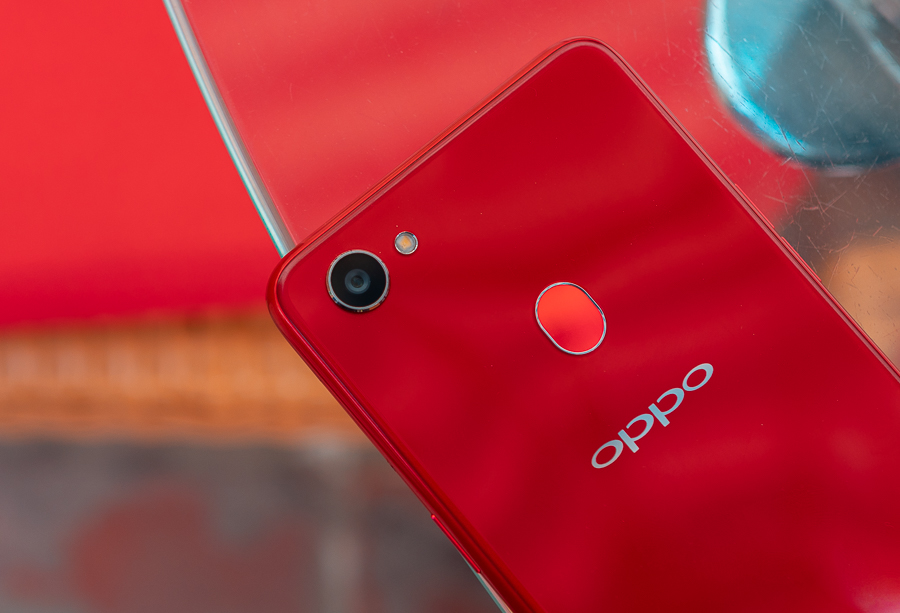 The AI recognition Technology uses 128 recognition points to identify the face. It also has PIN passcode but doesn’t have character or pattern password.

The 3400mAh battery on the Oppo F7 literally lasts all day even while playing games occasionally. The energy efficient 12nm Helio P60 processor is at play once again.

However, it took me around 2.5 hours to fully charge from 0 to 100%. This is due to the fact that which it lacks any kind of fast charging support.

In our review of the Oppo F5 last year, we had suggested Oppo to include the VOOC technology on its smartphone, but that’s not the case this time as well. Huawei recently launched the Nova 3e that has fast charging enabled, so it’s high time Oppo followed the bandwagon as well.

The Oppo F7 might not have a great rear camera setup or the state of the art software. However, the device will never give up on you with the octa-core p60 processor at helm. And if you are more into selfies, let’s just say the F7 is the best smartphone for you.

It also has a long-lasting battery and a beautiful design. So, would I recommend this to someone? Well, definitely. Barring a couple of cons this device has, the features it offers, the selfie camera and that performance, all makeup to the Oppo F7 being a powerful midrange device.