So, yes, the Snapdragon 215 surely took a considerable amount of time. After such a long time, we expect significant upgrades. And it actually does.

On to the graphics front, Qualcomm embedded the Adreno 308 GPU. It’s the same which is also employed by the SD 425, which was targeted at budget and lower-midrange phones at its launch. With that GPU, the SD215 will deliver a 28% bump in graphics performance.

And since multiple camera setups are a trend even on low-end phones, there’s a dual ISP in the Snapdragon 215 as well. This enables it unleash new possibilities in the entry-level camera phones, too. With the new Image Signal Processor on board, the chip can handle a single 13MP camera module, or two 8MP camera modules. This means the upcoming entry-level phones might be able to capture portrait images – at hardware level. Another notable upgrade on the optics department has to be its ability to record 1080p videos. The older SD212 could only record up to 720p. 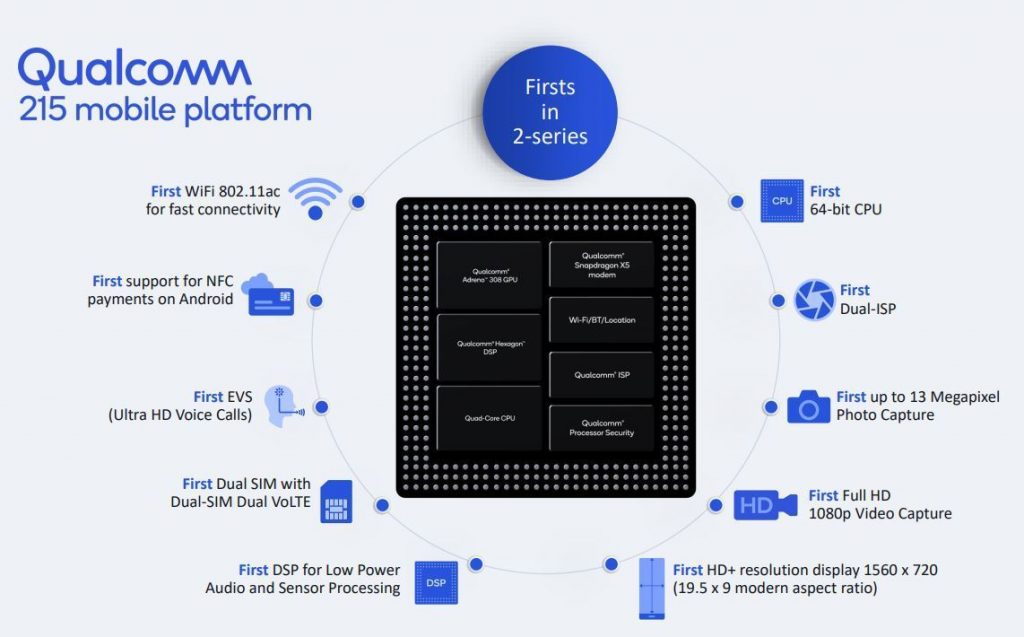 On the display side, it’s the same old story, though. The chip supports a maximum display resolution of 720p. But unlike the older SD212, which merely supports the 16:9 aspect ratio, this one can go up to 19.5:9.

Furthermore, the company managed to improve connectivity as well. The new chip comes with the support for Wi-Fi 5 (Wi-Fi ac) and Bluetooth 4.2. There is also the inclusion of NFC. That means even the upcoming entry-level devices will support the Android Pay feature. In addition, with VoLTE and EVS Voice calls (“Ultra HD Voice Calls”) support, the call quality can be expected to improve.

There surely are a lot of advancements. But even after all these years, some things haven’t changed. The first thing is the modem on this SoC. It still houses the X5 LTE modem (150/50 Mbps). Also, memory support is the same, too – LPDDR3 RAM, eMMC 4.5 built-in storage and UHS-I micro SD cards.

The Snapdragon 215 also promises a better battery life. Qualcomm has incorporated Hexagon digital signal processor (DSP), with which, users can get 10+ hours of video playback, 20+ hours of voice calls or days of music playback. However, the new chip only offers Quick Charge 1.0. The Snapdragon 212 used to support Quick Charge 2.0 charge, which used to accept power injection up to 18-watts. But the newbie can only handle power up to 10-watts. This is an odd step down, because after so much improvements, why compromise here, though?