Budget-conscious consumers are having a hard time deciding between 4G and 5G phones in 2021. While many markets still don’t have access to 5G, smartphone makers have been pushing 5G phones for a couple of years now. One such brand is Realme, which is even aiming to come up with 5G phones under the sub-10,000 price bracket in India by 2022. And today, I have the Realme 8s 5G in for review whose price starts at INR 18,000 in India.

So, is this phone actually worth the money or is its 5G hoopla yet another misleading illusion to drive up the sales? To answer all this, I will be comparing it with the standard Realme 8, so let’s get started.

Let’s start with the design first. The 8s 5G has a familiar gradient design language from most of Realme’s affordable and mid-range smartphones. The one that I have is the Universe Blue option that has a sparkly finish which the company calls the “Infinite Star” design. Aside from the glittery “stars”, this variant also switches between black and blue hues depending on how you’re looking at it. Moving on, a matte design is something I always look for in a smartphone, and thankfully, the Realme 8s 5G doesn’t disappoint in this regard. It saves me from all hassle of having to wipe off the fingerprints and smudges while giving the phone an equally attractive look as well. However, in case you want to wrap this phone with a protective case, Realme has provided a clear case inside the box itself.

Anyway, comparing it side-by-side with 8’s glossy finish that attracts tons of fingerprints and its hideous “Dare to Leap” branding, the 8s 5G was always going to come off victorious in terms of the design. Still and all, I’ll have to admit that Realme 8’s hands-on feel is much better than the 8s 5G. It is relatively more lightweight and slim, which definitely helps with handling the phone every day. 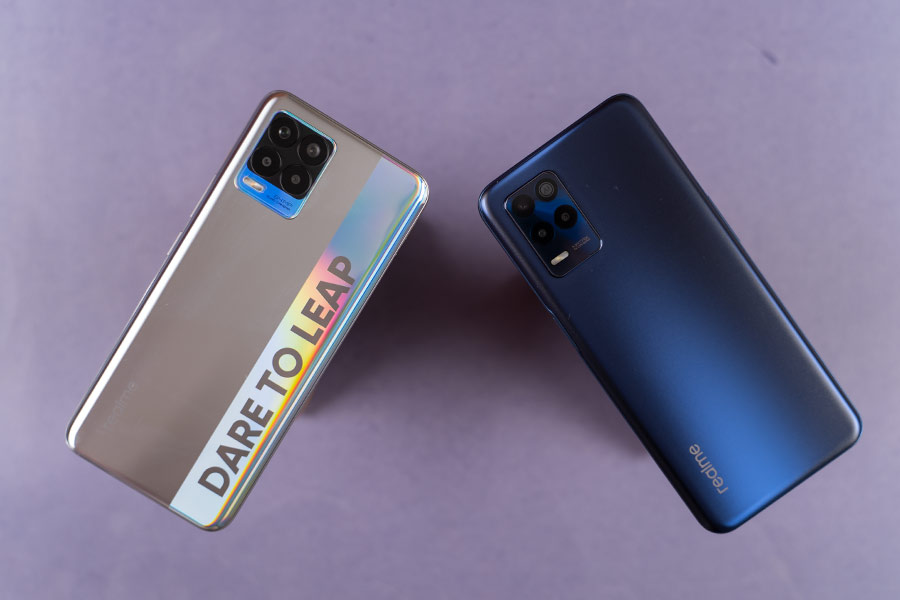 But that’s not to say the Realme 8s 5G has a terrible hands-on feel by any means. Its build quality is solid and the phone feels fairly premium too. The button placement leaves little room for complaint as well. There’s a fingerprint reader on the right that doubles as a power button, while the volume rockers and the SIM slot are located on the left.

Here, the SIM tray can accept two nano SIMs and a micro SD card, although it lacks a rubber gasket to guard against water damage. Similarly, there’s a solo speaker, a 3.5mm headphone jack, a USB-C port, and a primary microphone on the bottom.

Moving to the display, the Realme 8s 5G flaunts a 6.5-inches IPS LCD panel with FHD+ resolution and 90.5% screen-to-body ratio. Compared to the Realme 8’s Super AMOLED screen, this is a big downgrade. From deep blacks, perfect contrast ratio, to other perks like Always On Display and an in-display fingerprint reader, the Realme 8 has a far superior screen of the two. But to make up for this, the company has introduced a 90Hz refresh rate contrary to the 60Hz panel on the Realme 8. It means you’re getting a smoother scrolling experience whether it’s over Twitter feeds or when jumping from one app to another. Still, both phones have a 180Hz touch sampling rate.

And while the display on Realme 8s does not have any HDR 10 certification, you do get WideVine L1 support for HD streaming on OTT platforms like Netflix.

Moreover, this panel has a peak brightness of 600 nits, which is lower than 1000 nits on the Realme 8. In my usage, its indoor visibility has been more than adequate but heading outdoors, there were instances where I struggled to read messages and other contents off of this display.

Getting to the cameras, the Realme 8s 5G sports a triple camera arrangement at the back, which unfortunately doesn’t include an ultrawide lens. Instead, there’s a 64MP primary, a B&W portrait, and a 4cm macro lens.

Here, the daytime images from both phones’ 64MP sensors are extremely similar in terms of detail and dynamic range. Nevertheless, the ones from the Realme 8 have a warmer tone, while the 8s 5G is more on the cooler side.

Also, zooming in a little reveals photos from the Realme 8 to be grainy.

Likewise, both of them offer comparable edge detection when it comes to portraits. The portraits from Realme 8 have a red/pink tint to them whereas the Realme 8s shoot slightly hazy and soft portraits.

Besides this, the background separation and details look better on 8s as well.

The selfies share a similar story. The details and dynamic range are remarkably similar, but Realme 8 smoothens the subject while adding a faint reddish tinge as well. The 8s, on the other hand, produces a pale subject tone.

Nevertheless, both devices struggle with edge detection when it comes to portraits selfies. Also, the 8s have somewhat higher contrast, whereas both of them process the background to look vibrant and something that pleases the eyes.

Moving on, the Realme 8s perform admirably better in terms of nighttime shots. As you can see from these samples, it has significantly superior exposure maintenance.

Even under night mode, I prefer the pictures from 8s. Its photos retain more details, have a higher level of clarity, and appear more balanced in every way.

Furthermore, I found that the cameras on Realme 8s captures more light and have better image processing than the Realme 8 under low-light situations.

And then there’s the gimmicky macro camera. Still, the close-up shots from the 8s look a bit vibrant and somewhat appealing.

When it comes to videos, while the Realme 8 can shoot at up to 4K 30fps, the 8s can only record up to 1080p 30fps videos. Anyway, under this resolution, the videos from the 8s look more stable and retain a good white balance. Also, it has better exposure maintenance and dynamic range.

Upfront, selfie videos are restricted to 1080p 30fps on both phones. Here, the 8s adds some warmth to the subject while its field of view isn’t that wide either.

Now, let’s now move our focus on the performance, which is where things get more interesting. Powering the Realme 8s 5G is MediaTek’s 6nm-based Dimensity 810 5G. On the other hand, the standard 8, features MediaTek Helio G95 SoC which is built on a 12nm architecture.

Here, the company has coupled this chip with either 6 or 8GB of LPDDR4X RAM and 128GB of UFS 2.1 storage. I have the 8/128GB version myself, which also enjoys up to 5GB of virtual RAM using Realme’s DRE technology. 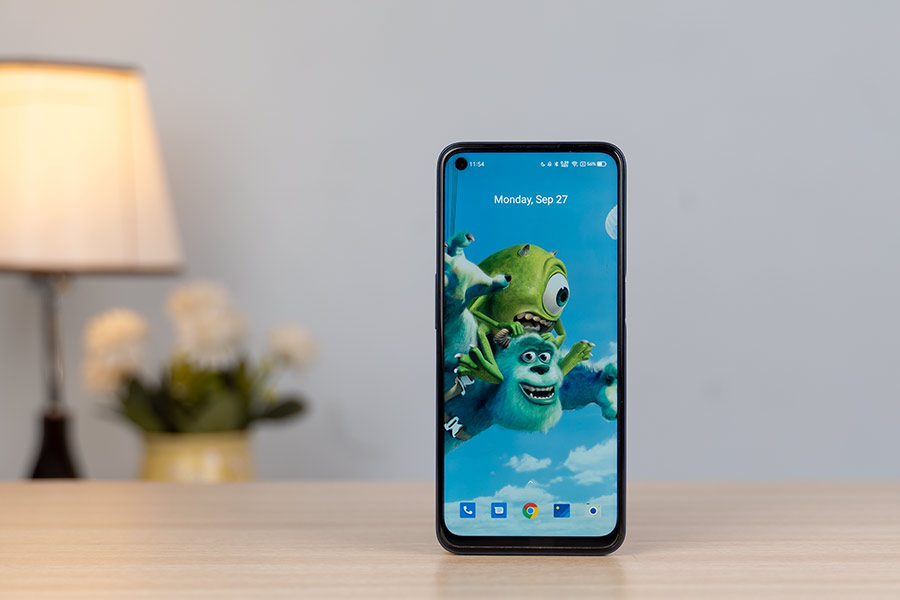 DRE surely improves the phone’s capacity to hold a couple of lightweight applications in the memory, but expecting a large performance boost is a pipe dream. As a result, I found that turning it off entirely had no impact on my regular usage.

On to the software side of things, the phone boots on Realme UI 2.0 based on Android 11. And as we know by now, this UI is not that resource-heavy, so there were barely any instances where I ran into any performance hiccups.

However, what’s annoying here is that Realme UI comes with a ton of junk apps pre-installed. This issue was prevalent on the company’s flagship Realme GT smartphone as well that I reviewed recently. More specifically, my unit of the Realme 8s has 15 bloatware apps pre-installed. Thankfully, you can uninstall them without any hassle. But in the future, I’d really appreciate it if Realme’s custom Android skin were free of such intrusive third-party programs.

With all that out of the way, allow me to discuss its gaming capabilities now. While I was pumped to test out Dimensity 810’s gaming prowess, I was quite let down to see that it’s only slightly better than the Helio G95 on the Realme 8. Even benchmark scores prove the same.

Here, PUBG Mobile maxes out at HD graphics and a High frame rate. This setting delivers 28-30fps with occasional shutters. So, for better stability, I had to switch the graphics to Smooth and frame rate to Ultra where it manages 37-40fps and minimal jitters. Similarly, COD Mobile is playable at a High frame rate, with the fps count reaching up to 40fps and zero hiccups unlike in PUBG. Moving on, relative taxing games like Genshin Impact delivers 16fps in the highest graphics settings. Therefore, even though the Dimensity 810 is a fairly capable chipset, don’t expect it to run graphics-intensive games without any hiccups.

On to the thermals, after about an hour of continuous gaming, the CPU temperature on the Realme 8s rose to 47 degrees with about 11% battery drain. So, I’m quite happy with the thermal performance of it.

Moving on, this phone supports five 5G bands in total, which is significantly less than 13 5G bands on the Realme GT. Yes, I know the latter is a flagship handset, but to accommodate 5G, 8s also foregoes an ultra-wide lens and AMOLED display. Thus, not going all-in on the one highlight of the phone is something I can’t seem to get my head around.

But like I said in the intro, is buying a future-ready smartphone in the budget and mid-range segment worth your money—especially one that compromises on several aspects to deliver 5G?

To the best of my knowledge, the answer is no! Here, I am talking about South Asian countries such as India, Nepal, Pakistan, and others where 5G deployment still has a long way to go. For instance, proper plans for implementing 5G are still being debated in Nepal whereas 5G spectrum allocation in India is expected to take place in February 2022.

Meaning, there’s still a lot of time left before 5G becomes available to the public. And until then, I believe smartphone brands will have come up with a better value 5G phone that doesn’t skimp on other features. Besides that, its audio output isn’t that exciting either. You’re getting a mono-speaker like the Realme 8, whose output is fairly loud. Even though its sound quality is strictly average, high-frequency audio does sound relatively better here. The call quality is pretty decent as well. Throughout my usage, the sound from the earpiece is clear and I have not had any call dropouts issues either.

Moving on to the battery, both devices pack a 5000mAh cell. However, the new 8s supports 33W charging contrary to 30W on the Realme 8. In terms of their endurance, under my daily usage which includes hours of gaming, casual web surfing, clicking photos/videos for samples and with the screen refresh rate set to 90Hz, the 8s comfortably made it through the day, finishing with nearly 20% battery leftover by the end.

Thus, one can easily expect 7-8 hours of screen-on-time on this phone. Similarly, it only takes about 1 hour and 12 minutes to fully charge its battery using the 33W fast charger provided inside the box.

To summarize, the 8s 5G has not lived up to my expectations in terms of cameras or display. While 2021 has seen a flurry of budget and mid-range smartphones with an AMOLED screen and a fairly competitive camera setup, Realme’s bow falls short in both areas. But since it’s a pretty reasonably priced 5G phone, it is entirely up to you whether you want a 5G device with mediocre specs or a 4G handset with superior features.