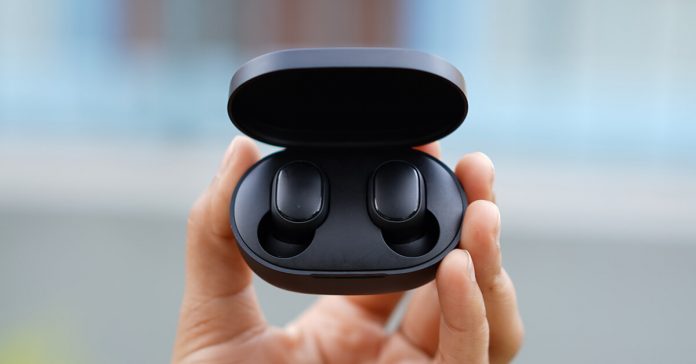 Whether you like it or not, the era of the 3.5mm headphone jacks on smartphones seems to be coming to an end. I don’t want to believe it either, but it’s happening. More and more phones are skipping it, and finding one on a flagship is a plus point, these days. Yes, they are really getting rare. As compensation though, smartphone makers are either including a USB Type-C to 3.5mm headphone adapter or USB-C headphones in the package. But it’s just not the same. And this is making wireless headphones more popular than ever.

And in this genre, Apple’s AirPods are quite popular, and recently, Samsung’s Galaxy Buds too. But they are expensive! So, I thought why not explore some underdogs? And that led to me getting this… the Redmi AirDots. These cost about a fourth of the Galaxy Buds, about $30! And you can buy like 5 of these for the price of one Airpod too! That makes it sound quite compelling, but how good is it in real life?

In terms of design, these are quite generic. The case gives it a Galaxy Buds vibe right away, even when you open it. The buds itself has a rounded shape, nothing too fancy, and the small form factor makes it feel minimalistic too. These are also very light – at 4.1 grams each, and might feel kinda hollow inside. But because of that, they’re also very comfortable. And even listening to them for long hours doesn’t tire your ears. Maybe the build won’t win them any points, but what more to expect for the price? Also, you get two extra pairs of ear-tips or earbud gels inside the package. They also differ in size, but for most, the default earbud gels will do. They fit quite snuggly in your ears and that somewhat helps in passive noise cancellation. However, these buds are really small. So, it’s easy to misplace them. Of course, the carrying case is there, but you won’t always remember to put them back in. The case also charges the Dots via pogo pins, so, maybe, it’s also a good idea to carry them. And even though the carrying case resembles the Galaxy Buds, it stands out with its bulkier looks and Redmi branding.

Both the buds have a tactile button each, to pair them with your phone. They also serve as controls – long-press the button to turn it on and off, press them once to play/pause media, and a double press will trigger your voice assistant. And since these have built-in mics, you can easily give voice commands to assistants like Siri and Google Assistant.

Both the buttons do the same thing, so, you might ask what’s the point. But having buttons on each side makes it easy to control them with any hand, which is a handy feature to have. Also, the buttons are fairly sensitive. It’s easy to accidentally press them while putting them on or taking them out, or even adjusting them. And that can really be frustrating! In addition, it lacks sufficient controls. No volume control or no way to shuffle through your playlist is, admittedly, not a good experience.

The Redmi AirDots comes with 7.2 mm drives, uses the Raychem 8763 chip and adopts Bluetooth 5.0 technology. In layman terms, that means the connecting speeds and anti-interference ability is quite good on these. As with any typical Bluetooth device, the connection range is about 10 meters. But, with this pair, that happens only in an open space in a straight line of sight. If there are walls in between or some kind of obstacles, you will start facing distortions in the sound quality, even if the distance between is less than 10 meters. As for the sound quality, I didn’t have very high expectations, because, well, these are inexpensive headphones. But it wasn’t really that bad. The audio was crisp, clear and loud, enough. At the loudest of volumes, you might notice a slight level of distortions, but nothing very significant. And while I can’t say that the preserve the highs and lows in the sounds, it handles the mids pretty well.

However, these earphones are not the ones to go for if you prefer bass music. It’s safe to say that these don’t have enough bass at all. Those kinds of songs sound muffled, and while you can boost the bass at higher volumes, I don’t recommend doing that because it can get really loud. This means some distortions as well as it can cause hearing loss in the long run.  Also, the trebles and vocals of the songs were not very well refined. But considering the price, it was expected. As for the latency, you won’t notice any of that while playing audio tracks on your phone, but they are noticeable while viewing YouTube contents. And sometimes, you can also find the video and audio out of sync. So, let’s say that these are strictly for listening to music.

And since these headphones come with a built-in mic, you can answer calls as well. Voices are clear on both ends while doing so, but don’t use it in noisy environments, because, these don’t have active noise cancellations. Still, what it delivers for a budget headphone did impress me.

When it comes to battery, each bud packs a 40 mAh battery. Xiaomi promises 5 hours’ of backup on mono and 4 hours on the stereo. However, in my usage, I got around 3 hours on 60-80% of volume and around 3.5 hours on 50% volume while using it on the stereo. Now I would’ve preferred a slightly better battery life, but given its weight, I guess, that can’t be. But again, given the price, I’m quite satisfied with them. Of course, while carrying your case, you can always toss them in when not in use. The case itself comes with a 300 mAh battery. So, a fully charged case can charge the buds for around 3 times. And the buds connect to the case through the Pogo pins and take around 1.5 hours to get fully refilled. The carry case, however, takes around 3 hours to get fully charged. It uses a micro USB port, though, which feels quite outdated even in the budget wireless headphones these days.

To sum up, the Redmi AirDots are light, comfortable, and a snug fit. They also project crisp and loud audio at a decent quality. The battery life of 3 to 3.5 hours may not be the best but good enough for its size. All these good things in a $30 package is truly a great deal. I would’ve preferred dedicated buttons or gestures to adjust the volume and shuffle through. But I hope Xiaomi has plans to do it on the next iterations.

So considering the price and the quality it delivers, I have very few complaints. It did surpass my expectations, so, I think these are a good purchase for a pair of budget wireless headphones. So, if you are looking for a decent budget headphone, you can’t go wrong with the Redmi AirDots.