If there’s one company that can be accredited for making health and fitness tracking affordable to the masses, it’s Xiaomi. Aside from the beloved “Mi Band” lineup, it has been slowly expanding to the budget smartwatch segment as well. The Mi Watch Lite that we reviewed last year was a great smartwatch for its price, which was a rebranded Redmi Watch by the way. And in this review, I’ll be discussing its successor, the Redmi Watch 2 Lite.

It brings a bunch of features missing from the Mi Watch Lite but all those upgrades come at a price, quite literally. Compared to last year, the competition is pretty intense in the budget smartwatch segment in 2022. So it begs the question if that price jump is worth all the said upgrades at all. Let me answer that question in this full review of the Redmi Watch 2 Lite. 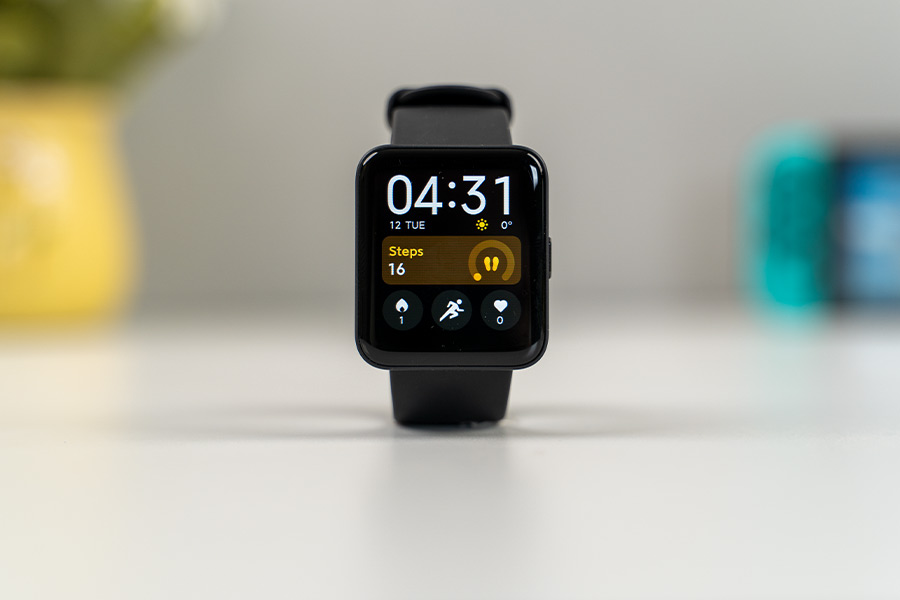 Like its predecessor, one of the biggest selling points of the Watch 2 Lite is its built-in GPS. And this time around, it’s only gotten better.

I vividly remember getting the “GPS signal is weak” error message on the Mi Watch Lite when I’d be indoors or in a relatively dense part of this city. Although the GPS lock is still not as instantaneous as you’d like, especially when you’re indoors, I find the Watch 2 Lite to be more than reliable enough to trail my workouts.

Cross-checking my route on the companion app, both the roadmap and satellite map recorded by the watch turned out to be quite accurate. Well, “accurate” would be putting it a bit generously because the watch sometimes suggests I leaped through buildings like Matt Murdock. I do wish I was though—dammit!

But the way Xiaomi has configured app distribution for this smartwatch is messy, confusing, bizarre, and ultimately counter-intuitive. As prompted, I initially paired it with my Realme 9 Pro+ by scanning the QR code for the link to the app.

Instead of opening up the Play Store, Xiaomi wants you to manually install the Mi Fitness apk file. Fine, I sighed; that’s no trouble at all. By this time, the app was still called “Xiaomi Wear” by the way, whereas the company decided to rename it to “Mi Fitness” and the “Mi Fit” app to “Zepp Life” just a couple of weeks ago.

So far so good, right? But as you all know, switching between phones is pretty common for someone in my line of work. And when I shifted to iQOO 9 from the Realme 9 Pro+, I noticed some weird bugs on the companion app—that I once again downloaded from Xiaomi’s own server instead of the Play Store.

Most noticeably, this version of the app fails to show the actual trail of my workout and there are also Chinese texts in some sections. Even Strava integration is missing from this supposed Chinese fork of Mi Fitness.

Xiaomi and bugs pretty much go hand-in-hand and this is yet another fine example of that tradition. You could make a religion out of this. So the lesson here is that you should download the Mi Fitness app from the Play Store instead of Xiaomi’s website.

Regardless, the redesigned app presents all your data in a clean layout that’s easy to read and understand. The “Device” tab is where you’ll find all the settings for the watch, which includes everything from customizing watch faces, widget layout, app notifications, and all those stuff. In case you’re wondering, the Redmi Watch 2 Lite works with iPhones too.

With that out of the way, let’s get into the health and fitness tracking side of things now. Like the Mi Watch Lite, it supports all-day heart rate monitoring besides sleep tracking and breathing exercises. I wore it alongside my Galaxy Watch 4 Classic and found that its sleep monitoring isn’t the most accurate.

On multiple occasions, the Watch 2 Lite failed to identify times I abruptly woke up in the middle of the night and log it as such.

As you can see from these charts, apart from my awake state, the watch also misses out on recording the REM sleep stage every now and then—on top of its inaccurate deep sleep logs. Moving on, you can also enable heart rate and blood oxygen monitoring overnight but be warned that this comes at the expense of battery life.

Now, if you haven’t noticed already, blood oxygen saturation—aka SpO2 monitoring—is a new addition to this budget smartwatch. To be honest, this was a pretty stupid omission in the Mi Watch Lite, to begin with. So it’s nice to see Xiaomi not repeat its past mistakes. While it can record your heart rate throughout the day, it can automatically measure SpO2 levels during sleep only.

A couple of other health monitoring features making their debut on the Redmi Watch 2 Lite include stress and women’s health tracking.

The Watch 4 Classic has been quite spot-on with logging my stress levels all through the day so I was eager to see how this guy performs. And I’d say “decent” best describes its stress tracking ability. Yes, it under-records my stress levels most of the time but at the end of the day, I can’t hold that against the Watch 2 Lite really.

On the other hand, Xiaomi says this smartwatch supports 100+ fitness modes—which is a LOT compared to just 11 sports modes on the Mi Watch Lite. But hold on just a minute, there’s no reason to get excited about anything here since just 17 of them are professional modes.

What this means is that the remaining 83 options available don’t have custom metrics of measurement and all they track is your heart rate and calories burnt during the workout.

For example, under pool swimming, the Watch 2 Lite lets you set pool length and keeps track of your pace and length covered. But similar water sports like “diving” or “finswimming” are restricted to logging heart rate and calorie levels only. At least you can set goals for every individual exercise, while they are also categorically organized. That’s… something I guess!

Oh, this thing is 5 ATM water-resistant, so you don’t need to worry about damaging the watch underwater.

Anyway, the Watch 2 Lite can auto-detect running and walking exercises and they work perfectly fine. On average, I noticed that it kicks in after 5 minutes or so—whereas I can’t complain about its auto-pause feature either.

I also like how you can view practically every stat of your workouts like heart rate zone, cadence, and such in the watch itself. Because of the limited screen real estate, you’re gonna have to refer to the companion app for checking out the workout route though. Perfectly understandable!

Talking about the display, Xiaomi has bumped the screen size from 1.4” on the Redmi Watch to 1.55” this time. Yet, it’s still a TFT panel with chunky bezels on all four sides. Don’t trust those misleading official renders! The company has also upped the brightness level from 350 nits to 450 nits here but I just can’t understand why Xiaomi would skip automatic brightness adjustment on the Watch 2 Lite. 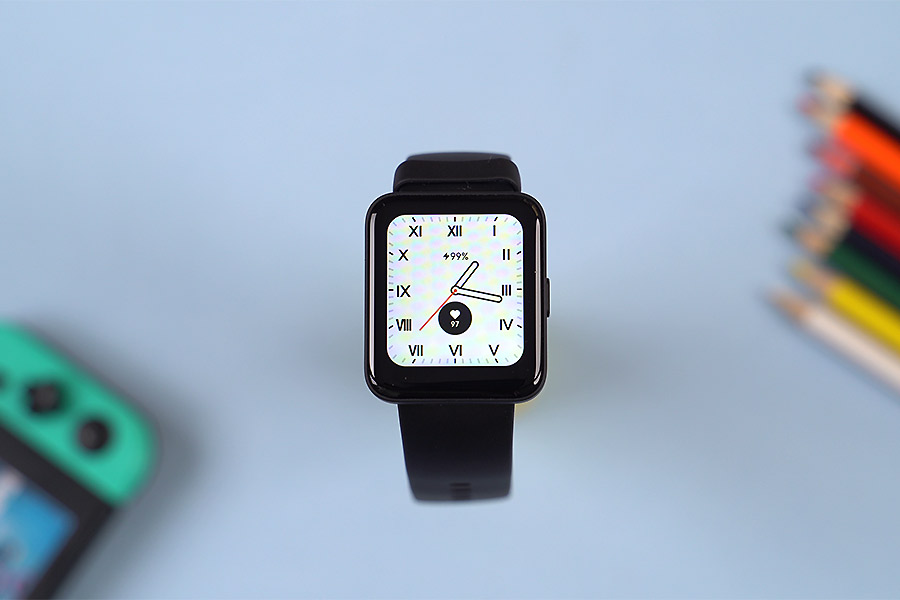 As a result, I’d have to manually toggle through brightness levels under normal usage, when going out in the sun, or during nighttime.

At max brightness level, the watch stays legible enough on a bright sunny day as well, and the contents don’t look pixelated too. Weirdly enough, waking up this screen takes quite a toll on the watch. Whether you raise it, tap it, click it, there’s a one-second delay before the screen wakes up. Feels like this is something Xiaomi could easily fix with a firmware update, but we’ll see.

If you recall our review of the Mi Watch Lite, one of the biggest complaints we had about its display—or rather its UI/UX element—was the lacking animation. Well… the Watch 2 Lite has it. And I’m not gonna lie, it’s not great.

Animations are slow, they look choppy, and you can even notice jelly-scrolling here and there. Now I can totally see why Xiaomi was skeptical about adding animations on the first-gen Redmi Watch. More about its UI/UX, well… nothing’s changed from last year.

Swiping left or right from the homescreen lets you go through the widgets, whereas a swipe up triggers the control menu, and a quick swipe down is how you access the incoming notifications. As expected, the Watch 2 Lite’s notifications are non-actionable except for phone calls. Although you can’t pick up a call because there’s no microphone onboard, you can silence or reject them here.

One more thing—Xiaomi has also optimized how notifications appear on this watch. Instead of center-aligning the text and breaking up words with hyphens, they’re now left-aligned and look much, much better. Emojis and support for Nepali, Hindi Unicode fonts are still lacking, but I digress.

And how could I finish talking about Watch 2 Lite’s display without discussing its watch faces? According to Xiaomi, it supports over 100 of them and I gotta say, most of them are incredibly well-designed and look absolutely stunning! Whether you’re a fan of digital or analog watch faces, I’m sure you’ll find the one you like after browsing through the options for a while.

As far as design goes, you won’t find any upgrades here either. Everything from its dimension, weight, to color options, is almost the same as last year.

Probably the only notable design difference you’ll notice on the Redmi Watch 2 Lite is when you plug it in.

Contrary to the bulky charging dock of the Mi Watch Lite, Xiaomi has gone with a svelte, non-obtrusive magnetic charger to fill up the 262mAh battery inside. You can expect it to go from 0 to 100% in a little under 2 hours. In terms of battery life itself, the Watch 2 Lite is rated to last up to 10 days under “typical usage”. 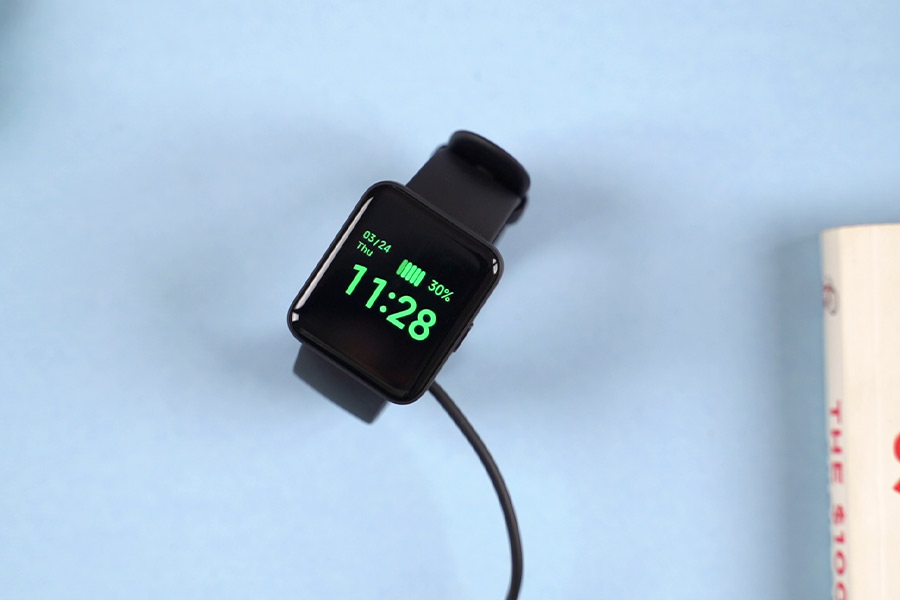 Xiaomi’s battery life test excludes overnight SpO2 monitoring on top of just 35 minutes of GPS usage in a week, by the way. But when keeping all the features turned on and using GPS for roughly 10-15 minutes every day, I was able to burn out its battery in just 4-5 days. It’s not the greatest thing in the world, but certainly a lot better than what the high-end WearOS smartwatches manage.

All in all, the Redmi Watch 2 Lite is a terrific update over its predecessor—no doubt about that. But does that mean it’s a worthy smartwatch for the price in 2022? I have my doubts. Apart from the built-in GPS—which isn’t 100% reliable, to begin with—there’s not a lot going on here. So if you can make do without the built-in GPS, I strongly feel like the Redmi Smart Band Pro—that’s straight-up INR 1,000 cheaper is the better value for money.

Yes, it doesn’t have a squarish form factor but look on the plus side: an AMOLED screen… with an always-on display… and auto-brightness adjustment. And it has a longer battery life as well. Besides that, these two share similar health and fitness tracking feature too so you won’t be missing out on anything either. But if you’re married to a traditional smartwatch look, Dizo Watch R is also something you can consider. Like the Smart Band Pro, this one’s also INR 1,000 cheaper and it has an AMOLED display. It did suffer from some rather troubling issues during the initial launch but the company has since fixed the said issues via a firmware update.

These two aren’t available in the Nepali market for now, but the Amazfit Bip U Pro, Honor Band 6, or even the Huawei Band 6 which you can currently find at an insane deal under Daraz’s new year sale are great options. I could go on and on. At the end of the day, even though the Redmi Watch 2 Lite isn’t necessarily a bad budget smartwatch, I don’t find it that appealing because of all the existing alternatives.