Back in November, Samsung unveiled the Galaxy A02s. And now, the company has announced the vanilla Galaxy A02 in Thailand. In this post, we will be taking a look at the specs, features, expected price, and availability of the Samsung Galaxy A02 in Nepal.

Like the Galaxy A02s, the vanilla A02 features a 6.5-inch LCD panel. It’s an HD+ screen with a resolution of 720 x 1600 pixels. The display has an Infinity-V notch that houses the front-facing camera. Bezels around the screen are quite noticeable, especially on the bottom chin.

The panel on the back of the device is covered with strips. There is a pill-shaped camera module on the left side of the panel with an LED flash just below it. The phone is 9.1mm thick and is available in two color options – Black and Blue.

Galaxy A02 differs from the A02s as it packs a MediaTek processor. Powering the phone is a quad-core MediaTek MT6739W CPU with a clock speed of up to 1.5GHz. Graphics are handled by PowerVR Rogue GE8100 GPU. The phone comes with 3GB of RAM and 32GB of internal storage. Latter can be extended up to 1TB using an external microSD card.

The phone ships with the One UI core edition. It is a toned-down version of Samsung’s custom UI that is used on its M-series and budget devices.

The pill-shaped camera on the back encloses two cameras. Its dual-camera setup consists of a 13MP primary lens accompanied by a 2MP macro sensor. When compared to the A02s, the A02 lacks a 2MP depth sensor. On the front, both devices feature an 8MP selfie camera. 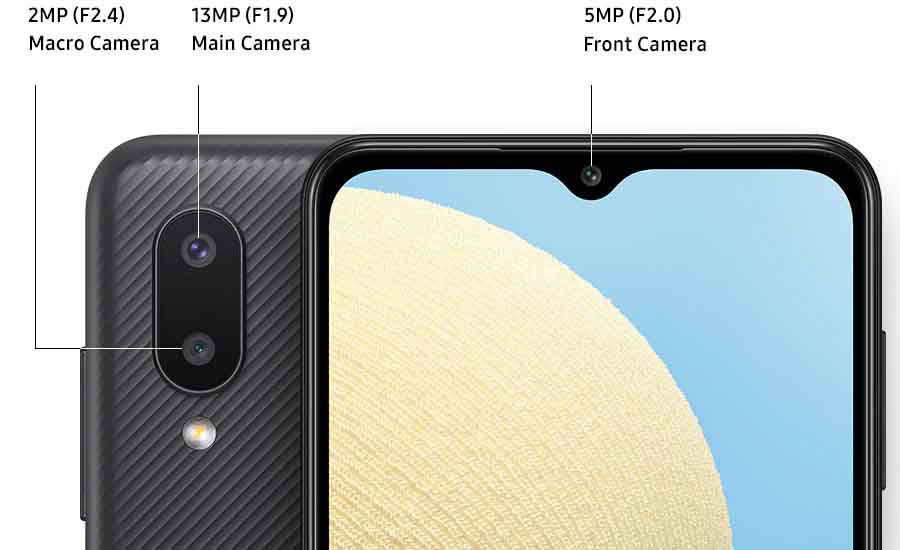 Galaxy A02 has a 5,000mAh battery. Samsung is claiming up to 19 hours of video playback time on a full charge. The phone features a micro USB port (USB 2.0) for charging. It doesn’t support any fast charging technology. In terms of connectivity, the phone supports 4G LTE, Wi-Fi b/g/n, and Bluetooth 5.1.

Samsung Galaxy A02 Price in Nepal and Availability

As you can see, the A02 is a lot similar to the recently launched M02s. To keep the prices down, Samsung has dropped the depth sensor and fast charging technology. As such, would you like to see it launch here? Let us know in the comments section.