Xiaomi Nepal revolutionized what a budget phone can be by launching the POCO C3 and POCO M2 back in November of last year. At just Rs. 15,000, you could now buy the POCO C3 with 4GB of RAM and 64GB of internal storage. Because of this, the phone quickly managed to win the hearts of many in the domestic market—and managed to dethrone Samsung’s existing reign in the budget smartphone market. So, the company had to do something about it, something quick. As a result, Samsung launched the Galaxy M02s here in Nepal before anywhere else in the world and we’ll be taking a deep dive into the device in this review.

Featuring a 4/64GB memory configuration, the phone costs one thousand more than the competition—the POCO C3. Here in this review, I’ll be discussing whether Samsung Galaxy M02s is worth the extra cash or should you stick with the trusty POCO C3. Let’s begin.

Let’s start with the packaging, shall we? Even though the M02s supports 15W fast charging, Samsung only ships a 10W brick inside the box, so a point un-won. Looking at the two phones side-by-side, I’m personally fond of the design aesthetics of the M02s over the POCO C3. It feels slightly more ergonomic on my hand and the texture on the rear panel offers a decent grip as well.

Those who’re looking for a bold design will definitely find this red color variant more appealing. But if you want something more subtle, you can go for the black or the blue option. Regardless, this dual-tone finish looks quite attractive. And because the build quality is everything plastic on this budget phone, I expected it to scratch up pretty bad given my experience with the Galaxy M51. However, that just wasn’t the case and I felt confident enough to skip a back cover on this phone.

The camera lenses don’t protrude as much either, so that’s great. Overall, the entire smartphone industry has come a long way in the past couple of years and it’s natural to expect good design and build quality even from an inexpensive budget device. Compared to Samsung’s J-series of phones in the past, there’s a vast improvement in the design language and more importantly—the Galaxy M02s holds up pretty nice against its arch-rivals.

Moving on to the display, there’s not much of a difference between the quality of the panel between these devices. Both phones feature a 6.5-inch-ish LCD screen with an HD+ resolution and a 20:9 aspect ratio (POCO C3’s display measures slightly larger at 6.53-inches). Similarly, these phones have a similar teardrop notch for the 5MP front-facing camera as well.

Besides the likeliness in the spec-sheet, the actual quality of these screens doesn’t vary that much either. The color reproduction, viewing angles, and brightness levels are almost the same in these phones. However, the POCO C3 does take an edge with its Panda Glass protection while the Galaxy M02s doesn’t come with any.

While it’s not the best at scratch resistance or drop protection, at the end of the day, having Panda Glass protection is better than not having anything. Still, I would suggest you put on a decent tempered glass on both phones for enhanced durability.

On the performance side of things, surprisingly, there’s not much of a difference between the POCO C3 and the Samsung Galaxy M02s. In theory, the Helio G35 on the former with its overclocked Cortex-A53 cores (4 cores @2.3GHz, 4 cores @1.8GHz) should’ve delivered noticeable superiority in performance against the Snapdragon 450 (8 cores @1.8GHz).

Even the benchmark will push the same story. But in everyday usage, I couldn’t notice much difference. Maybe because the animations are relatively more swift on the POCO C3, its UI feels faster.

In my gaming tests though, I totally didn’t expect M02s to perform better. For example, playing PUBG Mobile under Balanced graphics and Medium frame rates, while the gameplay was choppy on the POCO C3, the M02s unexpectedly delivered a smooth gaming experience. Moreover, you can even play the game at High frame rate and Smooth graphics. So, seeing Samsung optimize its budget devices for better gameplay is quite commendable. Likewise, COD Mobile feels optimized as well. Under Medium graphics settings and Max frames rates, there’s no noticeable lag or frame drop. Thankfully, this Qualcomm silicon doesn’t heat as much either. After an hour or more of continuous gaming, the plastic back panel does get slightly warmer but that’s not much of an issue. 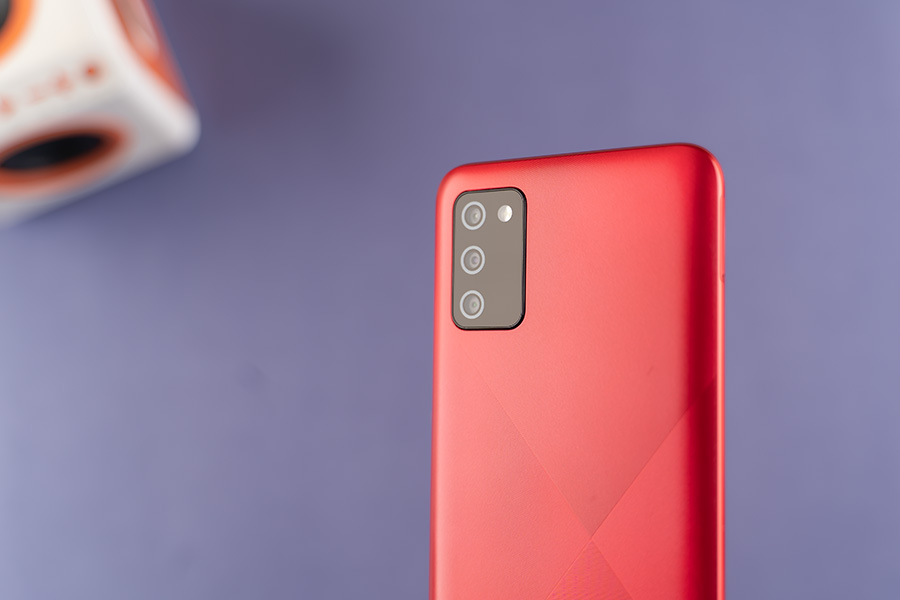 Let’s move on to the cameras now. Here as well, both phones share the exact same lens-setup.

The difference in image quality isn’t that vast though and in some instances, the M02s takes better photos.

In terms of videos, well, we can’t expect anything extraordinary from these phones. The M02s can take 1080p/30fps footage from both: front and back cameras just like the POCO 3. However, it expectedly lacks any sort of stabilization, and the details, exposure maintenance is pretty hopeless too.

While brands keep focusing on a big display, battery, bigger storage on budget phones, I feel like the camera capabilities on such category of devices are losing ground in their camera capabilities. Yeah, they now have more camera sensors but as I’ve discussed earlier or in any of our budget phone reviews, the auxiliary sensors are a pure gimmick with no added value to enhance the phone’s camera possibilities.

So, if you want considerably better cameras, I highly suggest you invest 2-3K more and go with the Redmi 9 Prime or the Motorola Moto G9 Play which are much better camera phones.

Finally, let’s talk about the battery life of these devices. Like in most other aspects, the POCO C3 and Galaxy M02s are powered by a similar-sized 5000mAh battery. And just like it is with POCO C3, Samsung’s alternative easily gives a day’s battery life as well—at least. 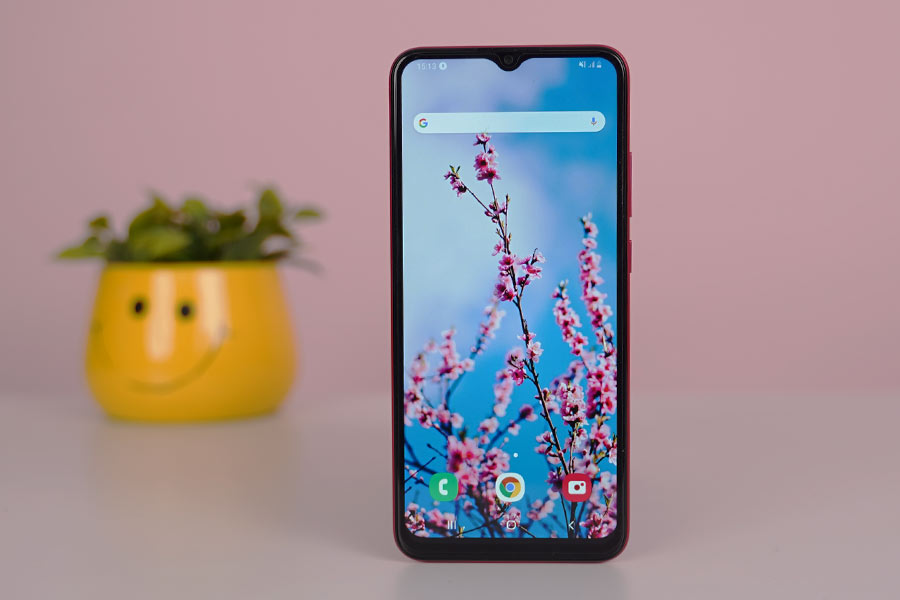 However, the Galaxy M02s does have an upper hand in this category since it features USB Type-C connection contrary to the Micro USB port on the POCO C3. What’s more, is that the M02s even supports 15W fast charging while its competition is restricted to 10W charging. But, as I said earlier, Samsung has been greedy enough to skip the fast charger inside the box itself.

So, I highly recommend you buy a decent 15W fast charger with the Galaxy M02s too since the 7.5W power adapter inside the box juices up the phone pretty slowly. 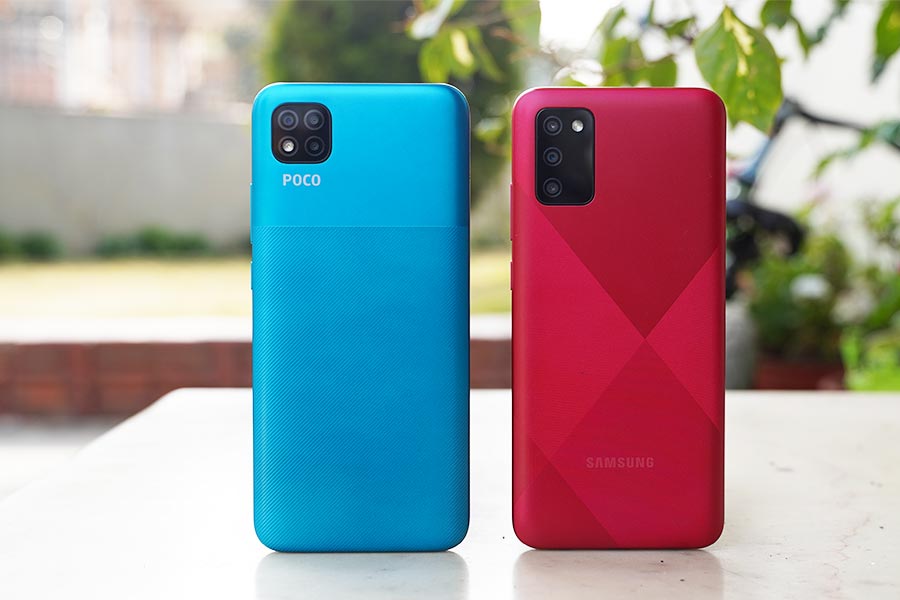 Plus, with the added edge of Samsung over companies like Xiaomi and Realme in terms of availability, after-sales service, I feel like many people will favor the M02s over its competition. Having said that, the bigger challenge for Samsung in the future is how to keep up the momentum and up the ante when it comes to its budget phones. Offerings from different Chinese manufacturers are crazy good value for money thus a major surge in their popularity in recent years.

Seeing how the company invests heavily in R&D, it should try to create a successful formula of its own rather than try to follow the competition. Its reputation in the midrange and premium smartphone category exceeds in comparison to how Samsung is perceived in the budget market. So, only time will tell if the South Korean tech giant will be able to return to its original glory in the inexpensive phone world as well.