Samsung, the Korean giant that already has a good standing on budget and flagship ranges with its Galaxy J series and Galaxy S series smartphones wants to take over in the midrange segment with the introduction of Galaxy A series smartphones starting from last year. This A series phones have got a second iteration this year and for last two weeks, we’ve used the Samsung Galaxy A7 2017, the latest and greatest phone in this lineup. Here’s what we think about the device and let’s find out where this big screen water resistant phone stands against its competition.

Starting with the design, it is where the phone easily surpasses the competition. The glass-clad phone with metal all around it seems to borrow the design language right from the company’s last year’s flagship the Galaxy S7. The phone is premium to look at and hold. The curved glass at the back does aid in providing good grip while using the device. The phone is truly a fingerprint magnet so get ready to rub your phone against your cloth every now and then. Design-wise, this is the fanciest mid-range phone that we’ve reviewed so far.

On the back, the phone is all clean with Samsung logo below the back camera and the flash. Thankfully, the phone doesn’t have a camera bump and lays flat on the table. On the front, the phone looks like a chunk of glass with big screens, thin borders, and obvious head and chin. The head has the proximity sensor, metal earpiece, and the front camera. The chin has a fingerprint sensor embedded in the home button with backlit capacitive buttons on the side. The phone has a tray for sim2 and micro SD card and a secondary mic on the top. On the right, it has a loudspeaker and the power button. Micro USB type C, primary mic, and the 3.5mm headphone jack are placed on the bottom edge. And, the volume rockers and the sim1 tray are placed on the left edge.

The A7 2017 has a big 5.7inch Super AMOLED Full HD display that has deeper blacks and great contrast. The colors are well saturated and do pop out like every other Samsung OLED displays. But if you’re coming from an LCD screen this might look a bit artificial to you and you can get the colors that you’d rather prefer by setting the screen mode to the “basic”. The viewing angles are super wide and the display is pretty bright and I had no issues while using the device outdoors. The display is protected with Corning Gorilla Glass 4 but still, I got few unintentional scratches on them so I would suggest you to apply some screen protection to the display just to play it safe. 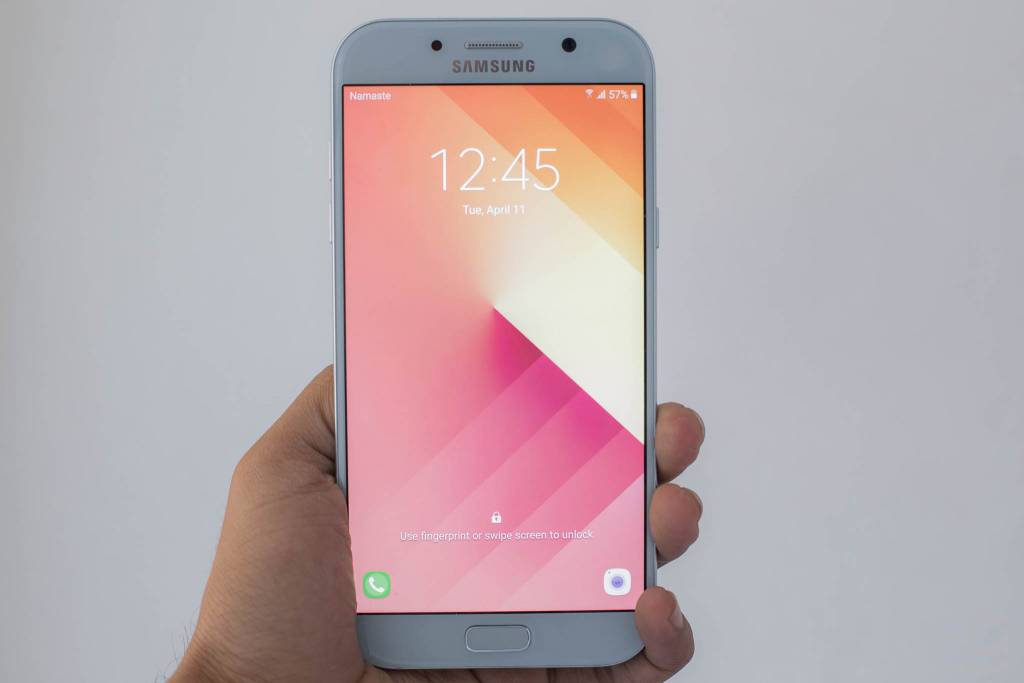 Now, it is in the performance where the phone doesn’t keep up with the competition both on paper and in real life use. That said, the phone that is powered by Exynos 7880 Octacore CPU and coupled with 3GB RAM is no super slow or anything. The app loading times aren’t that long and the phone is capable of running graphics intensive games as well. But it is when I tried switching the apps that were opened a while ago, the device took much longer than other phones in the same price range would do.

And, there were a few times when the device didn’t respond to the touches but I’m still not sure if it’s the display issue or the device issue. I played few games like Modern Combat 5 and Asphalt 8 and I wasn’t disappointed with its gaming performance. Plus, the phone didn’t have any heating issues even in my prolonged gaming sessions. Like the J7 prime, the loudspeaker is placed at the right top edge and is now less likely to be covered while gaming but I’ve used phones from same price range with much louder and richer loudspeaker. Lastly, the fingerprint sensor’s performance is sub-par and is not so impressive.

The phone runs on Android 6.0.1 Marshmallow but the real sweetness is the Grace UX that is minimalistic and flashy at the same time. The slightly rounded icons look pleasing to the eyes and the interface is much lighter and faster. The colored icons in quick settings to represent what is on and what is not are a welcome edition as well. What I liked the most are the grouping of notifications it does, and the split-screen mode that can be enabled by long pressing the recent app button.

It is when using the cameras the phone started to win my heart again. The phone houses 16MP, f1.9 units both on the front and the back that take 4:3 photos in full megapixel and 16:9 photos in 12megapixels. The primary camera focuses really fast and the photos come well-detailed with a little of over-saturation. The Camera app is much cleaner and comes with different modes and filters, that can be accessed by swiping from left and right respectively. The floating camera app button and swiping vertically on the camera app to switch cameras are other cool features. You can take 30 burst photos both from the front and the back by long pressing the shutter. The front cameras are on point in reproducing right skin tone and the selfies can be tuned to look even better by different beautification options like skin tone, skin smoothing, and large eyes.

Coming to the videos the phone can shoot 1080p videos at 30fps at the highest both from the front and the back. Though the phone has an option for software video stabilization, the camera unit doesn’t have Optical Image Stabilization and that can be felt while trying to shoot videos while walking. Coming to where the camera suffers the most, it is under the low-light conditions when the photos come too noisy with lots of grains in them.

For wireless connectivity, the phone comes with Wi-Fi 802.11 a/b/g/n/ac with dual-band support and Bluetooth 4.2. Other sensors used in the phone are GPS, NFC, accelerometer, gyro, proximity, compass, and barometer. The phone supports Dual 4G SIMs and a microSD card. The Wi-Fi networks and data were stable and I had no problems while calling. The call quality was excellent, so was the audio coming out from 3.5mm headphone jack. The volume of the earpiece is already loud and in the case of hearing aid needed while on a call, there is an option for “extra-volume” from the earpiece as well.

Comparing with the phones in similar price range based on the battery performance, Samsung Galaxy A7 2017 is without a doubt a definite winner. The phone with 3600mAh battery gave me an insane battery life worth a full day even in my heavy usage. If you want to enhance the already good battery life then you could do so by turning off the always on display that drained the battery a little faster during the time of my review. In last 10days, I’ve charged the phone for 7 times in total.

The Samsung Galaxy A7 2017 isn’t the right phone for everyone. It’s for those who prioritize looks over performance. If you need a water resistant phone to address your multimedia needs and that lasts longer on a single charge then it’s the phone for you. But if you want a phone with the performance worth the price then you should be looking somewhere else.

What I Disliked About Samsung Galaxy A7 2017:

If you weren’t impressed by the Samsung Galaxy A7, Here are some other options you can consider:

After the recent price cut, the last year’s Samsung’s flagship, the Galaxy S7 now falls on near-to price range and is another device to be considered. The phone is now available to buy on Rs. 57,900. The phone sports a 5.1-inch QHD (1440 x 2560 pixels) Super AMOLED display protected by Corning Gorilla Glass 4. It houses a 12MP, f/1.7 rear and 5MP, f/1.7 front cameras. It is powered by Exynos 8890, 4GB RAM, and 3000mAh battery. The phone boots on Android 6 Marshmallow but is upgradable to Android 7 Nougat.