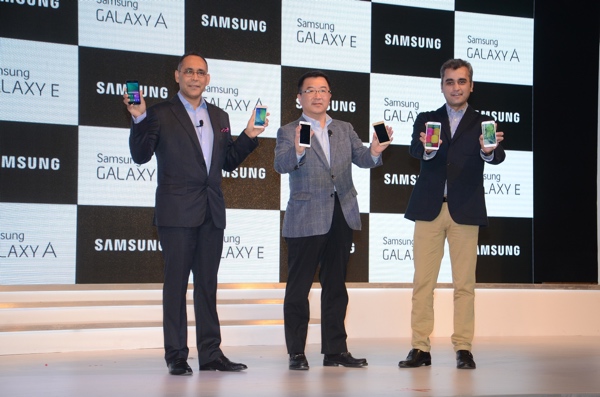 Samsung has unveiled two mid-range smartphones – the Galaxy E5 and the Galaxy E7. Other smartphone companies has been busy at CES 2015, but Samsung launches these two new phones in India and will go on sale from January 20.

Samsung has been shifting from their sluggish Plastic body to more premium metallic body and these two E-series is no exception. Both these phones offers 7.3mm-thin aluminum uni-body and looks premium. Obviously, in the specs department, both these phone are mid-range. The Samsung Galaxy E7 features a 5.5 inch 720p Super AMOLED display, a quad-core SoC running at 1.2GHz, 2GB RAM, 16GB on-board storage (with microSD card support), a 13MP rear snapper and a 5MP front-facing selfie camera. The phone is powered by a 2,950mAh non-removable battery. The smartphone has been priced at NRs. 32,500 in Nepal.

Both these phone run Android 4.4 KitKat with Samsung’s TouchWiz UI on top and features ‘Hybrid Dual-SIM’, allowing the second SIM slot to be used as a microSD card slot.