Home Samsung Samsung’s foldable phone is no more a tale! 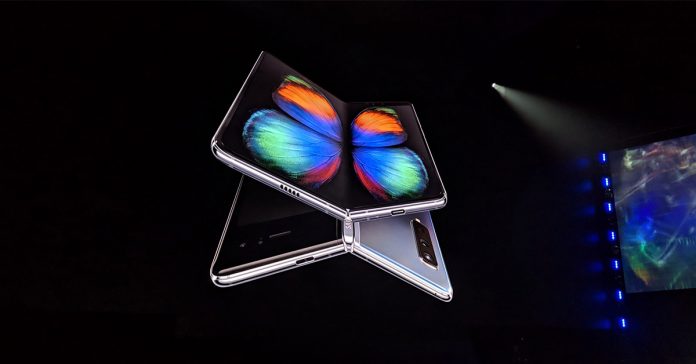 It’s here people, it’s here! Samsung’s long-rumored, long- tested, long- conceptualized foldable phone is finally here. And we also have a name to it, Samsung Fold! It’s been seen along with the latest S- series smartphones today and as fancy as it looks, it will be sold as a premium smartphone. In terms of availability, the device will be launched on March 26th  this year with a massive price tag of $1980. Wow, now that is a lot of money! Let’s talk specs now. The device has a huge 7.3- inch Infinity Flex Display. The main display, the unfolded one, has a QXGA+ resolution (4.2:3) and when the display is folded, the smaller one has a 4.6- inch HD+ (12:9) display. The Infinity Flex display makes the phone to have a huge screen that can be folded to fit in your pocket.

Having an over flagship price, this one packs the Snapdragon 855 chipset that is built in a 7nm architecture and has a total of 12 GB RAM and 512 GB of storage. The storage provided here is a UFS 3.0 (eUFS) that aids faster speeds.

Battery wise, it’s not just one inside, but two! The two batteries are separated by the fold but are combined in the Android operating system. So, altogether, the battery is 4,380 mAh.

At the rear of the device, there are three cameras, a 12 MP wide-angle lens, a 16 MP ultra wide lens and a 12 MP telephoto lens along with a 10 MP cover camera for selfies. So, the huge screen allows for a three app multitasking at once that is being made possible by using an app continuity system to adjust three apps when you move between tablet and phone modes. Similarly, many apps, including popular ones like Youtube, Whatsapp, etc have been made optimized for the new display type and word id, Samsung is working closely with Google to ensure that the Galaxy Fold display supports Android 9 Pie.

Samsung, with the Galaxy Fold, has made sure that the back of the phone is sturdy enough to support all the folding and unfolding. It has a hinge system that has multiple gears that allow the device to transform from phone to tablet and vice-versa.

Yes, it’s nice to see Samsung finally bring out something that it has been trying for so long. However, it’s not just them doing it. Xiaomi has also very recently revealed a foldable smartphone. Similarly, LG has brought foldable OLED TVs. But, we can always look for Samsung and other phone manufacturers to bring more of these in the near future.