Th J- series is one of the beloved and highest selling midrange lineups from Samsung. However, it seems like it hasn’t been able to keep up with the likes of Chinese brands. Can the recently launched Samsung Galaxy J6 with the infinity display reclaim their position in the market? Let’s find out in our review.

Starting from the design, I must say I love how it looks. The Galaxy J6 comes with a slender and smooth design which looks and feels great in hands. Attractive as it looks, its slim body makes it comfortable to hold and easy even for one-hand usage. The plastic back is neither matte nor glossy so there will be no annoying smudges and fingerprints on the back. However, it is quite smooth, so it frequently slipped from my hands. On the left, there are volume buttons, a tray for sim 1 and a tray for sim 2 & micro SD card. The power button and the speaker is on the right. The speaker gives quite loud and crisp sound. I usually place my hand on the speaker while watching videos and wonder why the sound is so low even when it is in full volume. But after a week of usage, my hands naturally adjusted. Under the camera is a fingerprint sensor. Its quite accurate but it’s not the fastest out there. The face recognition works fairly in daylight, it takes some time before it unlocks the screen

The Samsung J6 features a curved edge 2.5D glass for 5.6” Super AMOLED Infinity Display and the tall display with 18.5:9 screen to body ratio looks very attractive. Although the resolution is only HD, watching videos in the AMOLED panel is quite vivid and a treat to eyes. The viewing angles are quite decent too. While watching videos I noticed that the colors are vivid and have precise contrast which you don’t usually get in a budget smartphone. The display is quite bright as well. It works fairly in sunlight even when it is in 75% brightness. However, one thing I wished this phone had was auto-brightness. Yes, we need to manually adjust the brightness.

Moving on to the software department, the J6 runs on Android 8.0 Oreo. The UI looks quite similar to the S9 minus some features like Always on display. Since it also lacks Notification LED, I had to manually check for any notification which is bothersome at times. Come on Samsung, Notification LED is not a feature you should exclude in 2018.

I have always liked the Samsung UI as it is smooth and easy to use. Samsung has included some flagship features like S-health, Secure Folder and Samsung themes. Also, it has many advanced features as well like panic mode, dual messenger mode and so on. The dual messenger mode can be used for Facebook, Messenger, Viber and other few social media apps. And although like I mentioned before the phone is pretty sleek and comfortable to hold, there is an easy mode for better one hand use.

The Samsung Galaxy J6 is powered by an Exynos 7870 which has been powering Samsung’s midrange phones since 2016. I am not saying it’s a bad chipset since it’s based on energy efficient 14nm process, however, Samsung could and should have opted for more powerful MediaTek Helio P60 or the Snapdragon 636 or their own Exynos 7885.

On to the real-life performance, the phone performed well during my usage.  I didn’t expect it to perform this well. It didn’t lag or heat up lag while using Facebook and Instagram. The good performance is partly due to the fact that it only has to power an HD display.

Now talking about multitasking, it takes a while when switching between apps but that’s only when there is a lot of apps running in the background. Animations and transitions on the Galaxy J6 have been cut down to a minimum.

Playing low-end games like Knife hit, Alto is decent and it doesn’t heat up even up to 50 minutes of continuous gameplay. If you don’t play graphics-intensive games, the phone offers more than enough horsepower to offer you satisfactory performance in everyday tasks. So, if you are a PubG fan, you may not want to play it on this one.

The single 13MP back camera captures above average daylight photos in auto mode, but in pro mode, you can tweak the settings to get better results. The sharpness and detail are good too. Color reproduction, however, is a hit or miss, which can easily be noticed on the Super AMOLED display. The dynamic range is also pretty average for the price. Low light images are not bad and I found the color reproduction on low light to be surprisingly better than the daylight images. Also, there is no portrait mode, so no fancy portrait photos.

The 8MP selfie camera on the front was quite impressive though. The selfies come out quite good even under low lighting. The pictures taken from the front camera are better than that from the rear camera. 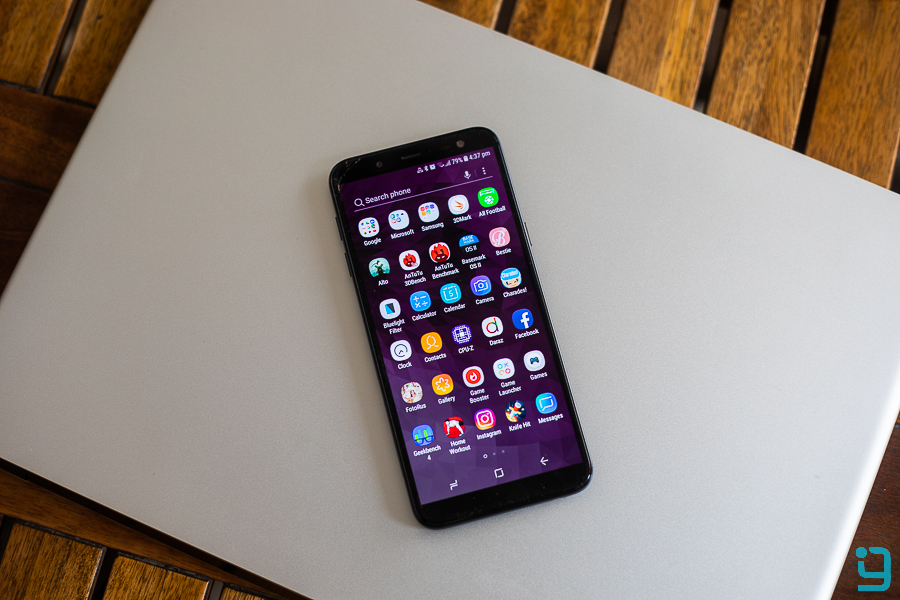 In a nutshell, the Samsung Galaxy J6 is a decent choice. It has got a good design, trendy 18:9 AMOLED display, surprisingly good performance, and excellent battery life. Also, Samsung has the brand appreciation and is probably the safest choice when it comes to aftersales and warranty here in Nepal. However, with the midrange smartphone market getting very competitive, you will easily get the Xiaomi Redmi S2 or the Huawei Y9 that offers more for the price.