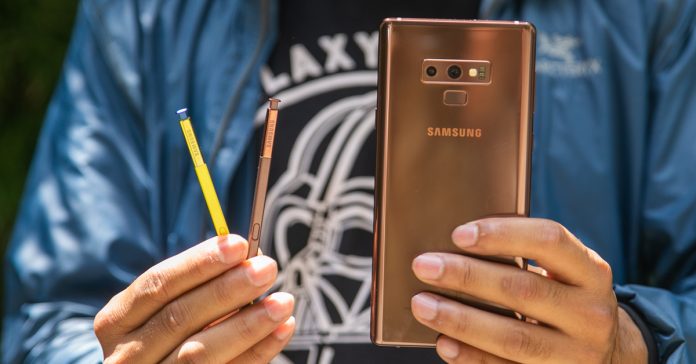 The excitement is real!! The Samsung Galaxy Note 9 is here in Nepal, too! When it comes to bringing the latest and the best in Nepal, Samsung does quite a job. The Galaxy Note 9 launched shortly in international markets, and it’s already available for purchase in Nepal.

In Nepal, you can get the Galaxy Note 9 in three different colors: Metallic Copper, Ocean Blue, and Midnight Black! If I were you, I’d go for the copper one, but the blue one seems to appeal to many. The Galaxy Note 9 features a large 6.4″ Super AMOLED Quad-HD+ display on a premium looking glass and metal body. The phones is built really well, with nicely curved edges and sturdy grip. Aesthetically and a visually pleasing form factor. The fingerprint sensor is at the right place, and it gets the same Dual Camera setup of the Galaxy S9+ – two 12 MP sensors with OIS and variable apertures.

The improvement is the AI-enabled cameras, which Samsung calls Scene Optimization. This detects elements in a scene like flowers or sky and enhances the brightness, color saturation and sharpness. Let’s see how this competes against Huawei’s AI cameras. But there’s also the Flaw Detection feature. This notifies you immediately if there is a problem in the background or some kind of blurs while taking pictures. So, you don’t have to worry about bad pictures now, do you? Under the hood, the Samsung Galaxy Note 9 packs the Exynos 9810 chip with 6 GB and 8 GB RAM options. That is quite the power, isn’t it? Also, Samsung has embedded liquid-cooling on the device to boost gaming performance and minimize thermal throttling while playing high-end games. And with a beefy 4000 mAh battery, this thing is sure to last you a full day!

The S-Pen is one of the most exciting things about this phone and this takes Samsung’s stylus game to a new level. You can even use it as a remote control to do things with your S-Pen. By default, it’s programmed for your camera, but it can be programmed for other things too! In addition, the Samsung Dex is now embedded in the phone itself. So, you no longer need a Dex pad dock. Simply, plug in an external display into the phone with an HDMI adapter, and get the desktop experience. What do you think guys? Is the Samsung Galaxy Note 9 exciting enough for you? Do let us know.