It looks like Samsung will launch the successor to the Galaxy Tab S5e soon. A new Geekbench listing suggests that the Samsung Galaxy Tab S5 is in the works, and it is a flagship tablet.

The Geekbench listing suggests that the Samsung SM-T865 will be powered by the octa-core Qualcomm Snapdragon 855 chipset with a base frequency of 1.78 GHz. While the Galaxy Tab S5e came in 4 GB and 6 GB RAM versions, the Tab S5 will feature 6 GB of RAM which is also mentioned on the listing itself. The tablet has Geekbench’s single-core score of 3506 and a multi-core score of 9788. 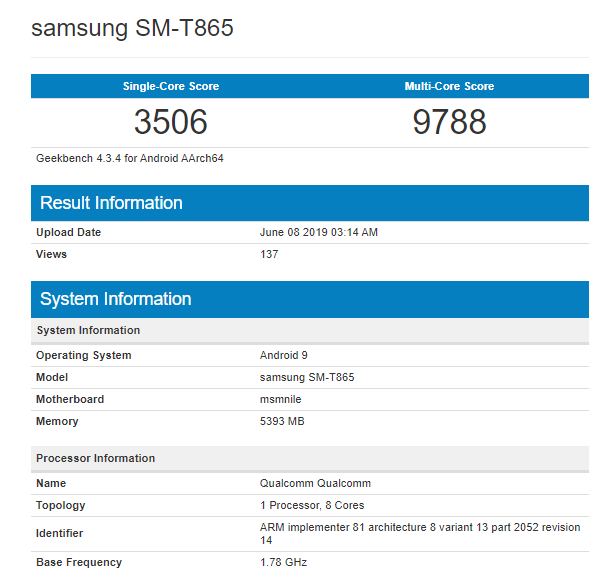 Even with the Geekbench listing, the Galaxy Tab S5 hasn’t yet leaked in the smartphone world like other devices. But we expect the device to come in a similar form factor like the Tab S5e. The predecessor had given up on the headphone jack for a slimmer design, and the same is expected of the Galaxy Tab S5.

About four months ago, Samsung had unveiled its first tablet for 2019 – the Galaxy Tab S5e. It is a tall 10.5-inch tablet with Qualcomm Snapdragon 670 inside. The device has a 13-megapixel rear-facing camera and an 8-megapixel front-facing snapper.

The Galaxy Tab S5e is available in 64 GB and 128 GB memory variants. The device has quad speakers and supports Type-C connector. It is backed by a large 7,040 mAh battery and is available for $399.