Recently, Samsung hiked the price of a number of its smartphones citing the new excise duty. The company has now revised the price of the Tab S6 Lite that was first announced in 2020. Having said that, let’s dive into what Samsung Galaxy Tab S6 Lite has to offer along with its latest official price and availability in Nepal.

Samsung Galaxy Tab S6 Lite was first announced in Nepal in April 2020. It was a cheaper alternative to the Galaxy Tab 6 launched a year before. At its launch, it was a great mid-range tablet with a free S-Pen stylus in the box.

A Super AMOLED panel with QHD+ resolution. Yup, that was the expectation for the Tab S6 lite Well, it’s not quite so. After all, it is the lite version of the vanilla tab S6 and they had to cut a corner somewhere. Thus it does not have an OLED panel, rather it is the less expensive 10.4-inch TFT panel. And the supported resolution is 2000 x 1200 pixels.

Furthermore, as you might already have guessed, the lack of an OLED panel means there won’t be an in-display fingerprint sensor on it. A prominent sort of bezel surrounds the screen and also houses the 5MP selfie shooter.

Moving on, under the hood, the device packs in the Exynos 9611 SoC. They have refrained from actually naming the chipset, however, it did reveal some details about the processor.

Per them, the Galaxy Tab S6 Lite boasts an octa-core processor with a base speed of 1.7GHz that max outs at 2.3GHz. I have no complaints regarding the use of Exynos 9611 because it is a good mid-range chipset and seems like a perfect fit for the device.

The processor is complemented by 4GB RAM and 64GB of onboard storage with microSD card support. Power-wise, there’s a 7040mAh battery that should last around 12hrs on a full charge. 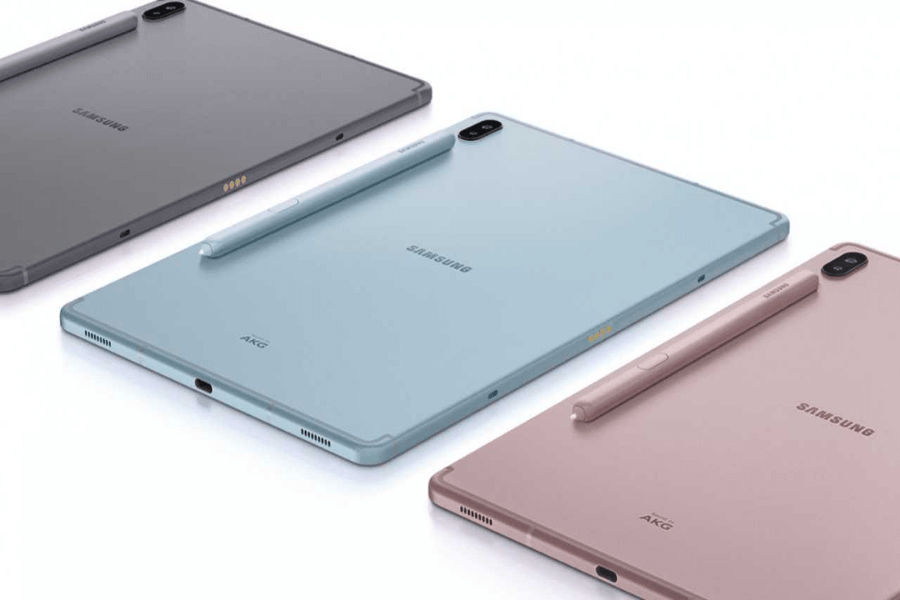 The most exciting thing about the Tab S6 Lite is that it does come with a stylus (yes, Apple I’m looking at you!). It is the same S Pen that we had seen in the standard Tab S6 and ships with the box. However, it does not have battery/Bluetooth in order to support air gestures similar to the one offered by Galaxy Note 10.

Furthermore, it also has a 3.5mm headphone jack which the vanilla Galaxy Tab S6 lacked. Oh, and before I forget, the rear cam on this device is an 8MP shooter.

In terms of software, the Samsung Galaxy Tab S6 Lite uses the One UI 2.0 on top of Android 10. Moreover, it also offers Dark Mode and Samsung Knox too. However, the DeX support is missing on the lite version. Furthermore, you can also answer calls and reply to text messages. However, it needs to be connected to a Samsung smartphone. And also it should be running on Android Pie or higher with at least 3GB of RAM.

Is the iPad the better option than Galaxy Tab S6 Lite?

Now, Samsung with the launch of the Galaxy Tab S6 Lite is certainly keeping the Android tablet lineup alive. However, how does it fare against its closest competitor? Yes, I am talking about the new iPad with a 10.2-inch display.

It is a classy device that offers a bigger screen along with a more powerful processor in the form of the A10 Fusion Chip. The iPadOS feels great to use and overall provides a better user experience. And that too at a lower price. Honestly, I never imagined myself saying that!

The upside though, is that with the Samsung Galaxy Tab S6 Lite, you get a stylus included with the device itself. However, in the case of an iPad, you’ll have to purchase the Apple pen separately for around $99.

Don’t get me wrong, having a stylus shipped in along with the device is really great, but if that’s your only redeeming quality against your closest competitor, then you won’t really stand a chance. Thus, if it were up to me, I’d go for the new iPad over Samsung Galaxy Tab S6 Lite any day of the week.

You can check out the detailed spec comparison between the Samsung Galaxy Tab S6 Lite and the new Apple iPad down below.

After the latest price revision, Samsung Galaxy Tab S6 Lite costs Rs 54,999 in Nepal. Previously, it had a price tag of Rs. 54,999. This price is for the LTE version with 4GB RAM and 64GB storage. You even get a free S-Pen in the box.