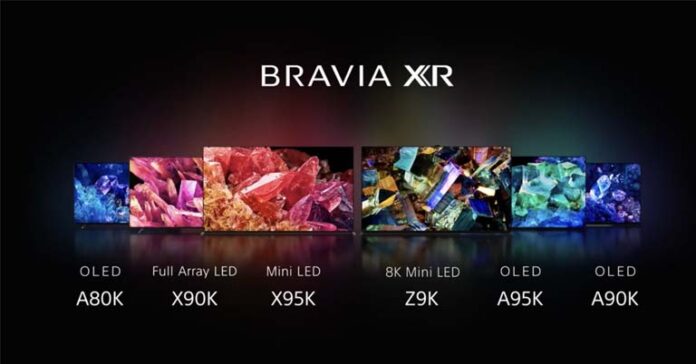 LG and Sony are the behemoths that dominate the OLED TV industry. Alongside LG, Sony has also announced its 2022 TV lineup which includes QD-OLED and a bunch of 4K and 8K TVs.

QD-OLED was pioneered by Samsung Display, and Sony is using Samsung-made panels for its QD-OLED TVs. Unlike your typical OLED panels that use WRGB (White, Red, Green, Blue) compounds to boost the brightness of RGB pixels, QD-OLEDs use quantum dots to filter blue OLED light into red and green for better light efficiency. While Samsung has announced its own QD-OLED TVs as well, Sony will be first to market.

The “QD” prefix in the name refers to Quantum Dots, which are expected to improve the brightness of OLED panels. Thus, with QD-OLED, you will still have infinite contrast and pitch blacks of OLED panel alongside higher brightness levels, which will produce more vibrant colors—especially on HDR contents. Sony will release QD-OLED TVs as a part of its A95K series. It will be outfitted with a heat diffusion layer, which contributes to uniform heat distribution. Furthermore, it will be powered by an improved XR processor with the “Depth Control” feature to improve the three-dimensionality of images. It will also have a “Flexible Color Contrast Control” feature which will intelligently increase the vibrancy of colors.

The A95K also has a camera—called the Bravia Cam—that magnetically attaches to the top edge of the TV and can be used for video calls. It will be further utilized for gesture control and automated sound optimization based on your sitting location.

Similarly, you can configure an alert to appear on the screen if the camera detects that someone is sitting too near to the television. Besides this, the TV will have different gaming features such as 4K/120Hz, VRR (Variable Refresh Rate), and ALLM (Auto Low-Latency Mode). Sony’s A95K series will feature 65 and 55″ TVs. However, those who prefer a smaller form factor can opt for A90K’s 42 and 48” models. The A90K is a standard OLED TV, although it features almost all the other specifications of the A95K.

Moving on, Sony is replacing its premium A80J OLED TVs with a new lineup called A80K. The series will have 77, 65, and 55” OLED TVs that are said to have better contrast than their predecessor—thanks to the new “XR OLED Contrast Pro” feature. This will be powered by an XR processor and will bring an improved sound system as well. Likewise, Sony will ship Z9K 8K TV as the successor to its popular Z9J 8K TVs. While the latter flaunts an LED panel, the new lineup will feature a Mini LED display which results in better contrast and a low halo effect. The Z9K will be available in 75 and 85″ options.

Moreover, there are X95K TVs that feature a Mini LED panel as well, while there are other LCD/LED models which will see some improvements over their predecessors.

As of now, there’s no word on when these TV will be debut in the market. However, we expect most of them to hit the shelves by Q2, 2022.