The first thing that impressed me about the Xiaomi Redmi 4 Prime is its metal body. Although a mid range device, the phone feels premium with full metal body and chamfered edges on sides. The phone comes in a compact form factor and has a typical Xiaomi design. Sporting just 5-inch display, it is comfortable to hold and I could reach almost anywhere on the phone with one hand. If you are a minimalist, you’ll love the design of the phone as the back holds only the Mi branding, left is clean with an incognito SIM tray and the right holds volume and power button. Up front, it has capacitive navigation keys which have pretty wide sensing surface, so you won’t miss those touches even if you slightly miss the buttons marking, and this is important because the buttons aren’t backlit.

The Xiaomi Redmi 4 Prime comes with a 5-inch Full HD display with the pixel density of 441ppi, that’s a lot of pixels for a 5-inch screen thus resulting in a sharp display. The screen is bright and saturated resulting in punchy colors. The viewing angles are great and I didn’t notice any color shifting. 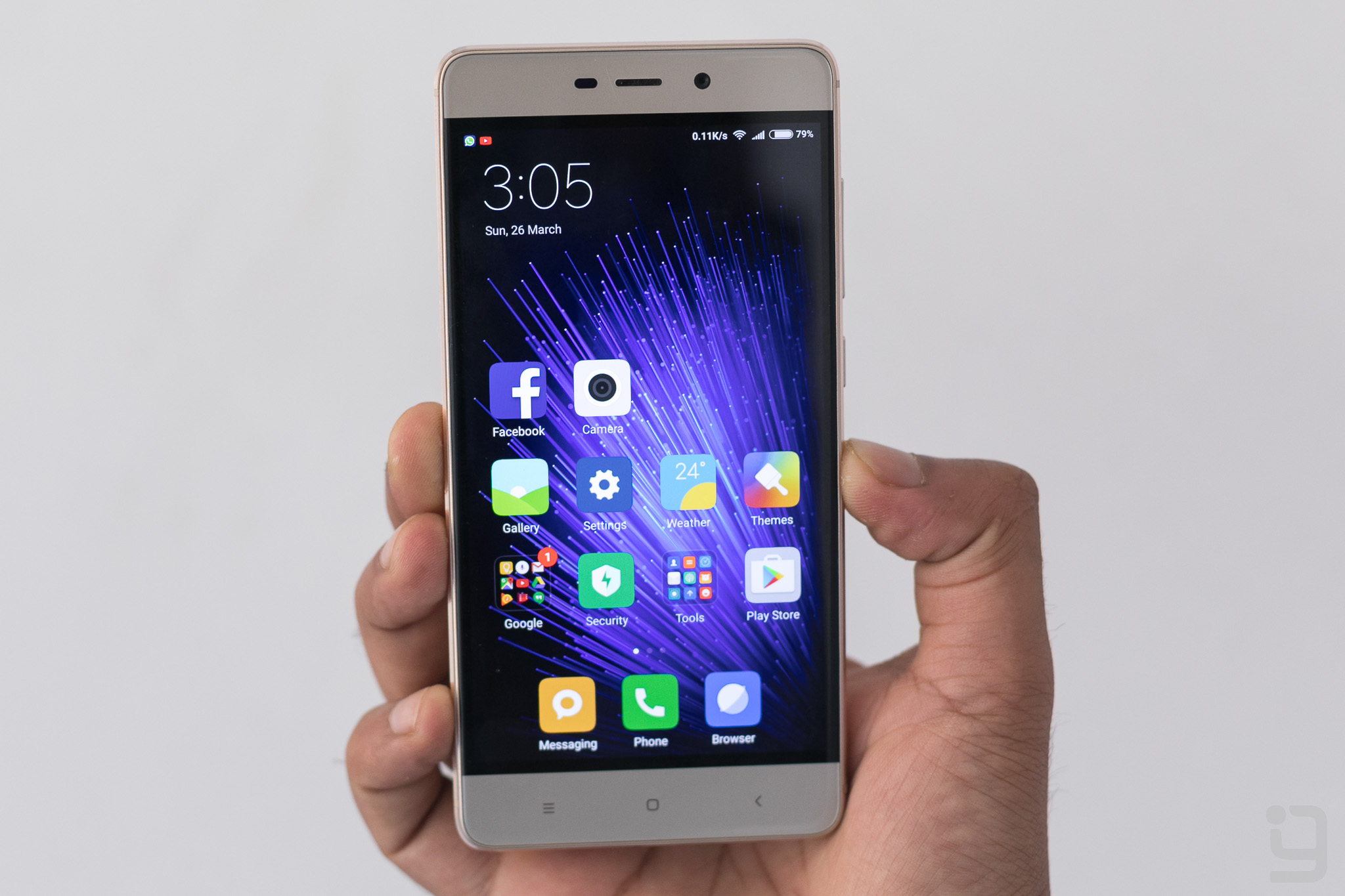 The outdoor visibility is good as I could use the phone in direct sunlight without any issues. But when you open the camera on direct sunlight, you can hardly see anything on the screen, as it becomes really reflective at that time. But that’s not the issue here, the one and the only issue I had with the display are those thick black borders. These are pretty distracting at first, but with time you’ll forget about it, but, it’s still there. An edge-to-edge display would have made this device a whole lot better for the eyes. 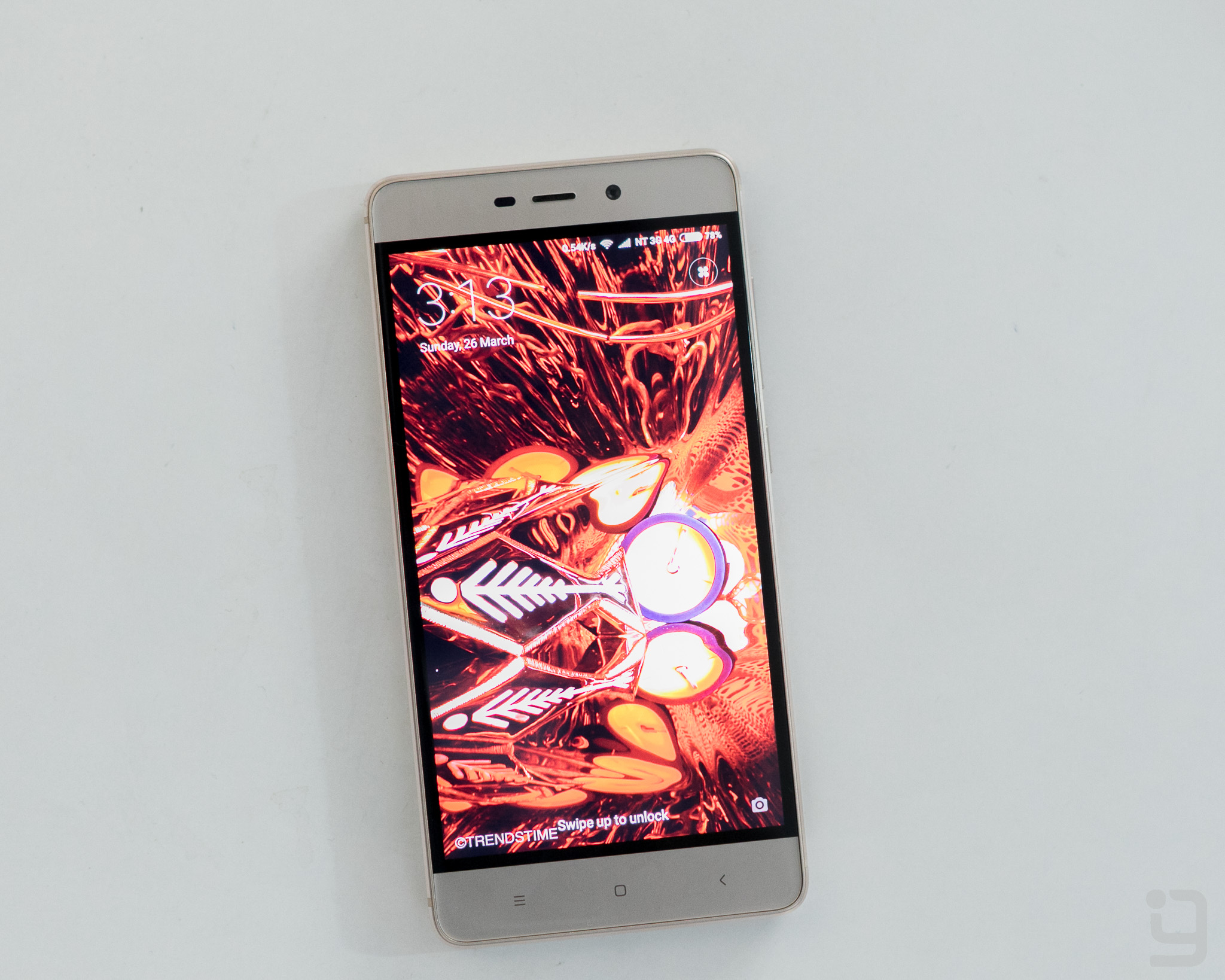 Also, Xiaomi hasn’t included any kind of scratch protection in the display, so we suggest you snap a tempered glass once you buy the device.

Coming down to performance, the Redmi 4 Prime is powered by Snapdragon 625 Octa-Core processor (Octa-core 2.0 GHz Cortex-A53, 14nm Process) and coupled with that comes the Adreno 506 GPU. For normal daily usage, there’s nothing it can’t handle. Even with heavy usage, there were no hiccups with its performance. I was able to push the device per my usage without any issues. With 3GB of RAM, I was able to multitask between 5-6 apps without app restart and if you are concerned about the memory, there’s usually around 600MB of RAM free with loads of app open and 1.3 GB when cleared all of those.

On the Gaming Front, I could play high-end games like the Asphalt 8 and Modern Combat 5 at reasonable frame rates with no frame drops and lags anytime soon. Having said that, the phone does get warm on the back, but it’s nothing serious.

The phone is running on MIUI 8.2 which is based on Android 6.0.1 Marshmallow. I have favored stock android for a long time over any skinned UI, even MIUI before. But the new MIUI 8.2 seems completely refreshing, it is pleasing to the eyes, colors and icons look playful and there are just bunch of interactive animations which makes using the phone a whole lot fun.

Software Walk Though
1 of 6

But what makes MIUI fun is those little details incorporated all around the UI, like the Reading mode to cut off blue lights, double tap to wake up screen, app lock with fingerprint unlock, dual apps where you can use two same apps with different accounts, junk cleaner to clean cache and junk files, quick ball: an assistive touch that provides you with options of navigation & screenshot, three finger swipe for screenshot, and notification light customization where you can assign different colored light for different types of notification, lite mode to make things way too easy and to save the battery life, and the list goes on and on. Images throughout the daytime were pretty okay and looked natural for the most part, but typically the images look warm, lacks sharpness and details and this was resolved to some extent by turning on HDR mode.

Dynamic range is fine, but not excellent. During twilight, you can adjust the exposure by sliding up or down to get suitable lighting on your photos. At night time, the images come out all right with plenty of grains but turning on HHT mode helps to some extent. It can shoot Full HD videos at 30fps and it was terribly bad. With no image stabilization, you get really shaky videos with constant exposure shifts and they pretty much lacked details.

The front facing 5MP Camera is okay, you get clean and clear photos in daylight and indoors but at night time it’s just full of grains.

For Connectivity, the phone comes with dual SIM slot, where the 2nd slot supports Micro SD Card extendibility. Wi-Fi networks and data was stable and I had no problems while calling. And on top, it also comes with an IR-Blaster and a supporting Mi Remote App which is pretty handy simple and straight forward. The call quality was excellent, so was the audio coming out from 3.5mm headphone jack. 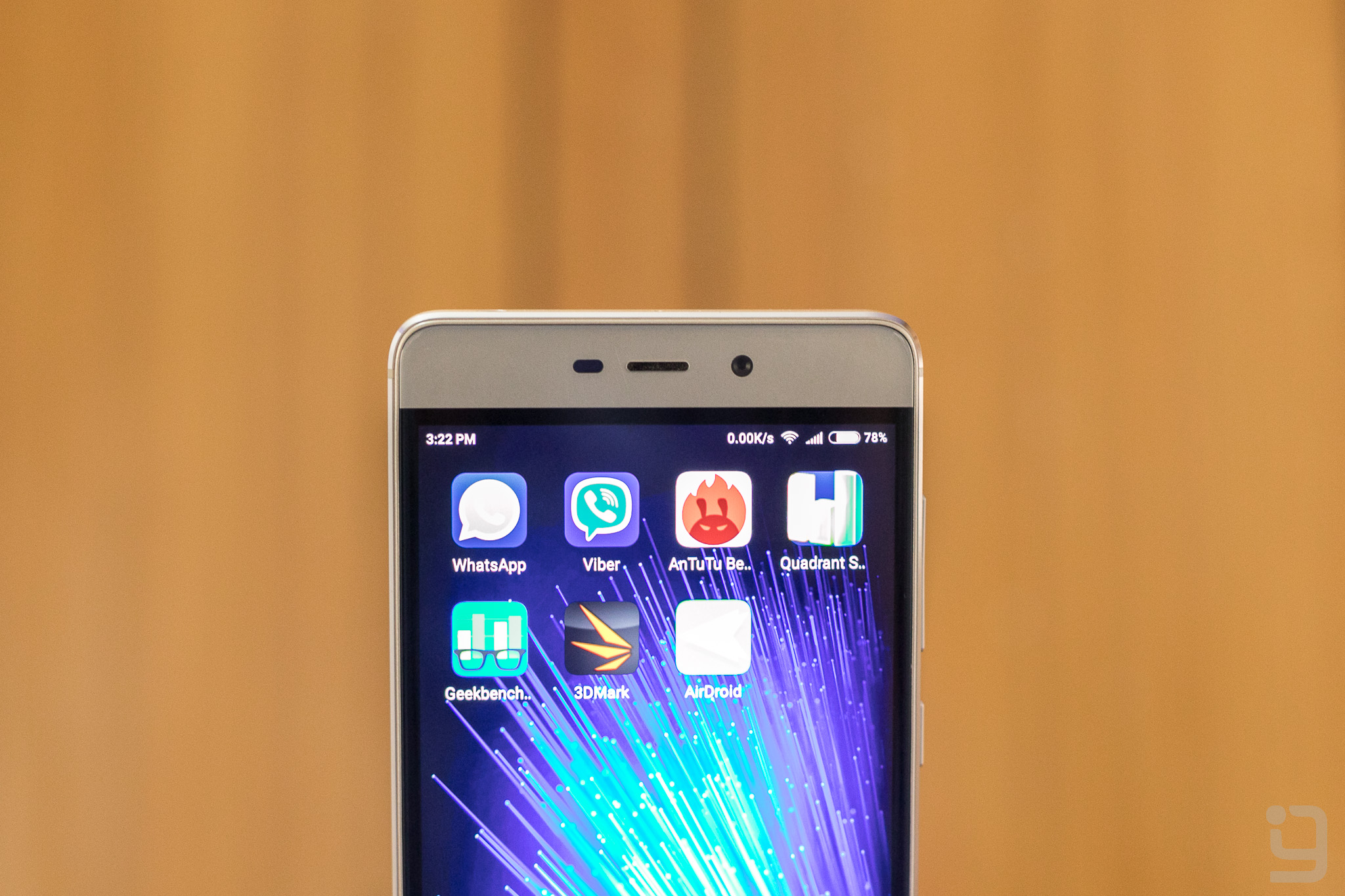 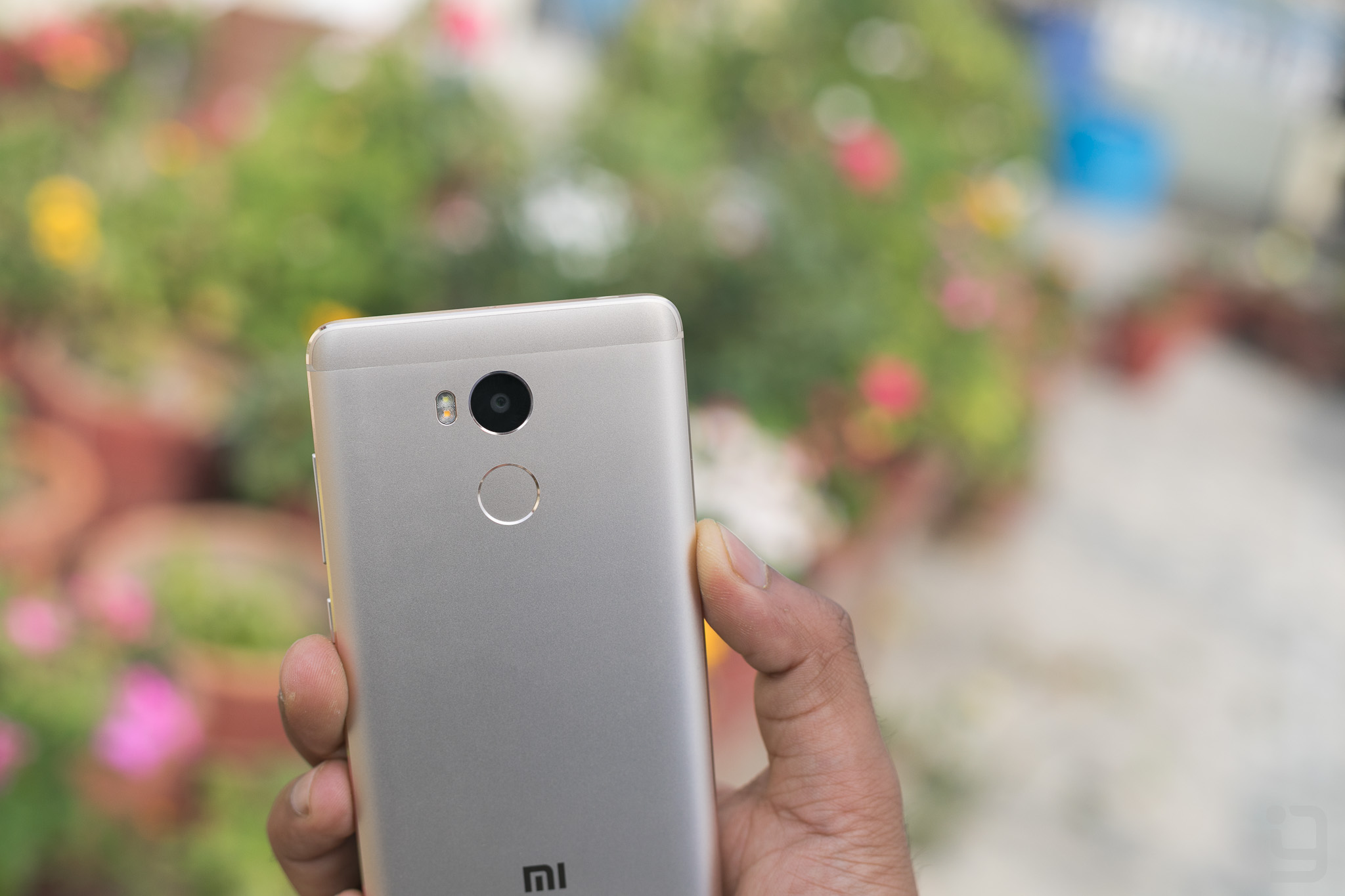 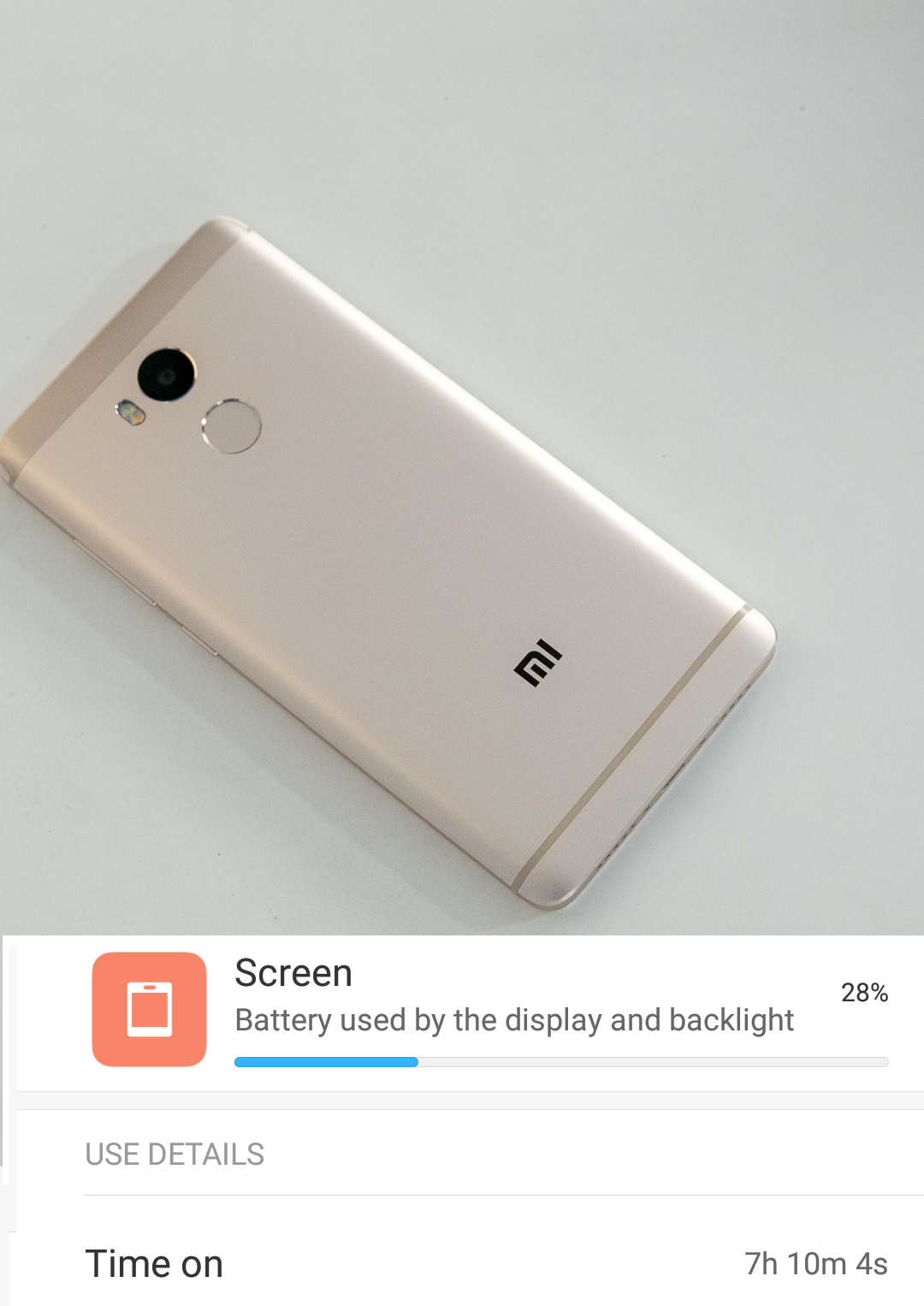 The battery on the Xiaomi Redmi 4 Prime is one of the best feature. The 4100mAh battery lasted for 2 days of heavy usage. From taking photos & videos to playing games and chatting all day long, the Redmi 4 Prime can go on and on.

Talking about the screen on time, I got somewhere around 7 to 8 hours, as the battery optimization is great on the MIUI and the phone uses a power efficient 14nm Snapdragon 625 SoC. If you want to extend the life further you can either turn on battery saver or the lite mode.

It took almost 3 hours to completely charge the device even though it has fast charging capabilities.

It isn’t often that a midrange comes with a short list of flaws and Redmi 4 Prime is one of those phones. So during my period of review, these are the things I liked and disliked about the Redmi 4 Prime.

WHAT I LIKED ABOUT XIAOMI REDMI 4 PRIME:

WHAT I DISLIKED ABOUT XIAOMI REDMI 4 PRIME:

IF YOU WEREN’T IMPRESSED BY THE XIAOMI REDMI 4 PRIME, HERE ARE SOME OTHER OPTIONS YOU CAN CONSIDER:

Priced at Rs. 25,999, the Axon Mini sports a 5.2-inch 1080P AMOLED display with Gorilla Glass 3 protection and forced touched display. It houses a 13MP rear and 8MP front cameras. It is powered by an older octacore Snapdragon 616 processor, 3GB RAM, and 2800mAh battery. It is running on an outdated Android 5.1 Lollipop.

Another great device in Redmi 4 Prime’s price range, the Samsung Galaxy J5 Prime comes with a better 13MP shooter. It is currently available at Rs. 22,990 and sports a lower resolution 720P display, quad-core CPU, and only 2GB of RAM.