2016 has to be the year of the ‘budget phones’ in Nepal. It saw the release of some mid-range proper ‘bang-for-buck’ devices. And even though the year is about to end, smartphone manufacturers and distributors show no sign of stopping. Nepal’s bestselling smartphone company – Samsung is doing just the same.

The Samsung Galaxy J5 Prime’s back design is different than any of Samsung’s previous phones as it features a camera and a LED flash at the back with its speaker on the right side. The device sports a glossy metal back with plastic top and bottom for antenna bands. It is thin, and looks and feels premium.At the front, the Galaxy J5 Prime features a typical Samsung smartphone’s design. There is an earpiece at the top along with a front facing camera, and a proximity and accelerometer sensor on its side. On the bottom chin rests a home button, a recent app switcher and a back button. The recent app switcher and the back button aren’t backlit. I had a hard time using these buttons in the dark. It would have been better if Samsung had at least made the buttons backlit. 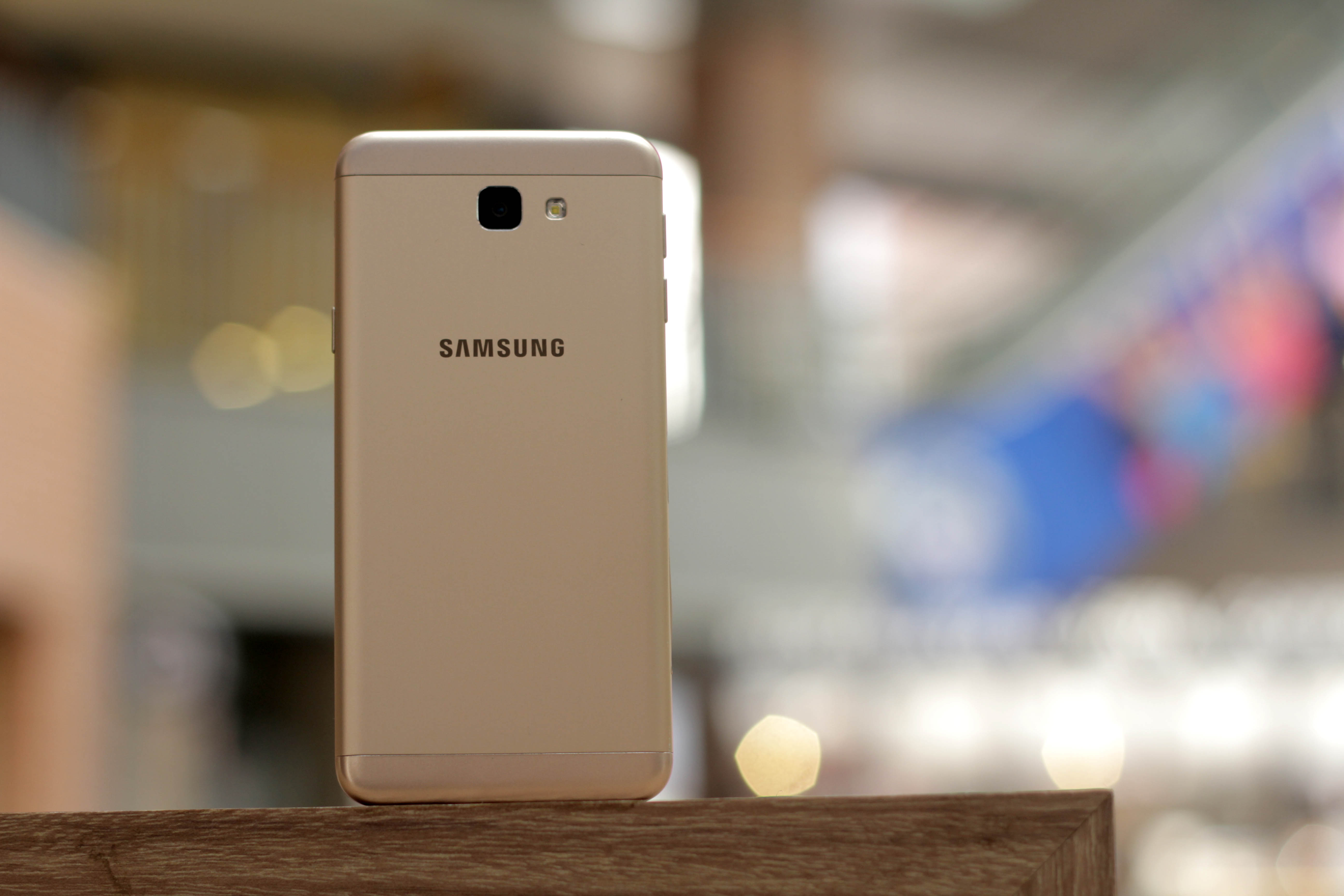 On the left side, there’s a power button and a speaker grill. Yes, the speaker grill is actually on the side, right above the power button. Volume rockers, SIM slot and a microSD card slot sit on the left side of the device. The bottom of the device features a USB Type-B port, a headphone jack and a primary mic. It lacks a secondary mic for active noise cancellation.

It weighs at 143g and while the metal back and the design of the Galaxy J5 Prime is really good, the device is quite slippery. So, I would suggest you get a case right away.

The Samsung Galaxy J5 Prime flaunts a sleek 5-inch IPS LCD display with a resolution of 720 x 1280 pixels with 294 for the pixels per inch (PPI). Even though the device lacks an AMOLED panel and a 1080p screen, the screen is bright and colorful. It also lacks an ambient sensor but there’s an outdoor mode for watching the display under bright light. The outdoor feature does its work nicely as I had no problem using the device under direct sunlight. Viewing angle is quite decent as well. Even with the device sporting a 720p screen, the display can go up against some of the 1080p displays. Not that I’m complaining or anything, but Samsung should have gone with an AMOLED display. The display would be more vibrant and the color reproduction would have been better. It is a bummer that the Samsung Galaxy J1 2016, a device worth 11,300, features a Super AMOLED display whereas a device worth 22,990 has gone with an IPS LCD display. On the software side, the Samsung Galaxy J5 Prime ships with Android 6.0.1 Marshmallow out of the box. The device comes with Touch Wiz UI on top. Previously, Samsung was criticized for its laggy and clogged interface. But the UI has come a long way as the company toned down TouchWiz and ditched lots of its bloatware. The device comes with a few pre-loaded Samsung apps which can be disabled. It also has preinstalled Microsoft Office apps like Word, Excel, PowerPoint and Skype among others. The Galaxy J5 Prime does feature SBike mode, and Samsung’s S Power planning and S Secure.

Even though I like a stock Android experience, I had no problem using the UI of the device. But it would have been better if Samsung made it simpler and toned down the interface of the applications. Other than this, the software front of the device is snappy and lag-free.

Under the hood, the Samsung Galaxy J5 Prime is powered by an Exynos 7570 Quad-core 1.43 GHz Cortex-A53 64-bit processor that is aided by a Mali-T720 GPU and 2GB RAM. The device didn’t lag under normal usage, and after heavy usage, there were minor stutters while using different apps. I should mention that sometimes while gaming, the screen just freezes. So, if you’re not heavy into gaming, the Exynos 7570 Quad-core processor and the 2GB RAM will handle your everyday task quite nicely.

On the hardware front, the device features 16GB of onboard storage. While 16GB of storage option might be sufficient to some, it wasn’t enough for me at all. Fortunately, there is a microSD card slot that helps to expand the storage up to 256GB. Its speaker is a setback because it is not loud at all and gets covered when using the device in landscape mode. I previously thought ‘speaker at the back’ was the worst placement for a speaker grill, but the Samsung Galaxy J5 Prime made me change my mind. The device has a USB Type-B port for connectivity and charging purpose. It also supports USB on-the-go. 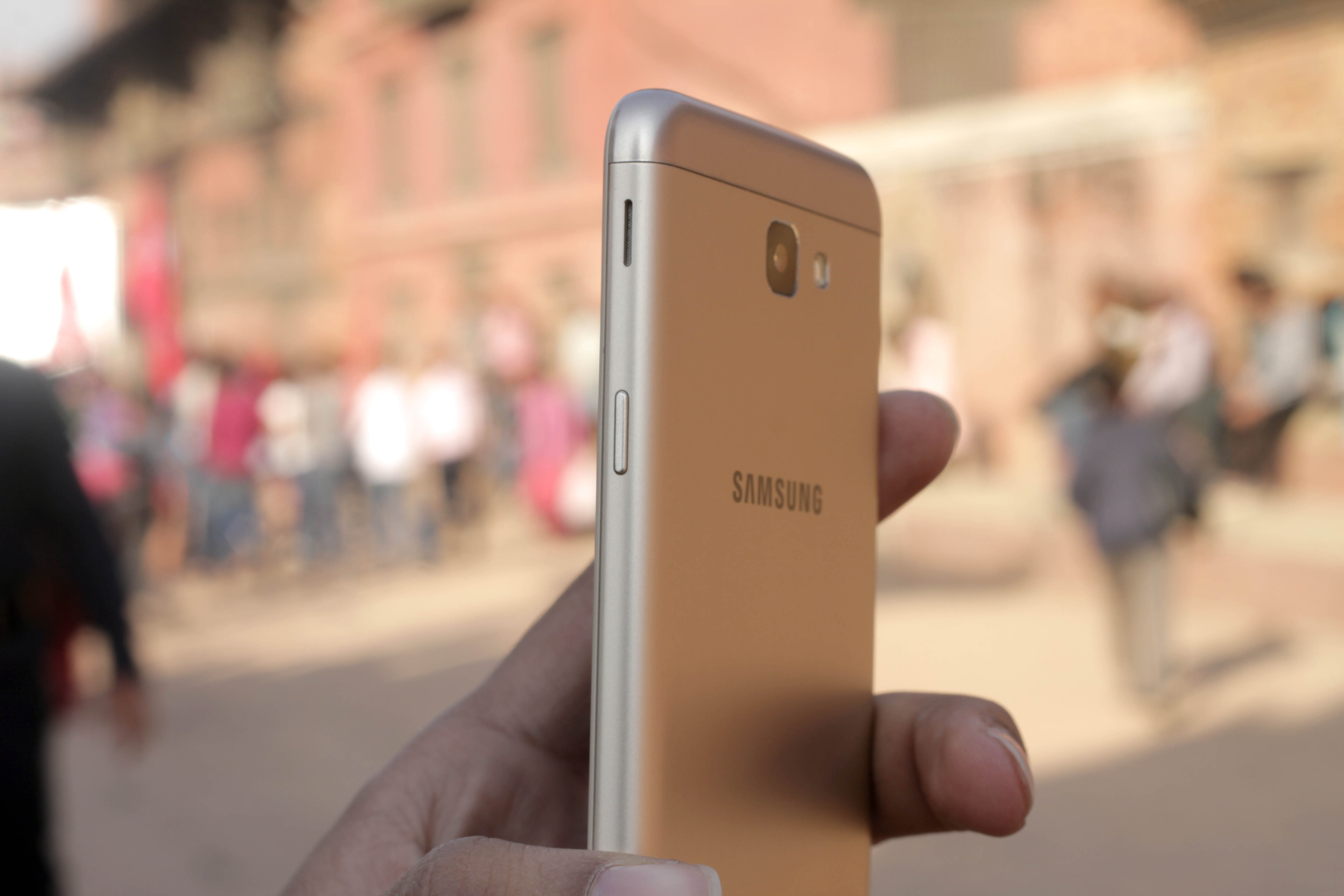 The Samsung Galaxy J5 Prime is equipped with a 13-megapixel rear facing camera with f/1.9 aperture. Under bright light, the camera does its job well and takes good pictures. The macro shots and wide-angle shots are good. However, during macro shots, the camera had a hard time focusing on any object. Like all devices of its price range, the Galaxy J5 Prime underperforms under low light as the pictures get noisy and grainy.

The front facing camera of the device is of 5-megapixel with f/2.2 aperture. It takes some good social media ready pictures in a well-lit environment. Like the primary camera, it too suffers in dark. But in the dark, there is an option that makes the screen glow brightly like the ones seen on iPhones. The camera app comes with features like Panorama, HDR and beauty face among others. There is a pro-mode which lets you toggle the ISO, White Balance and Exposure. It also lets you choose effects like Sepia, Greyscale, etc.

The Samsung Galaxy J5 Prime’s home button at the front serves as a fingerprint sensor. It is fast and easy to set up, with an option of adding multiple fingerprints. At first, the sensor did not function properly, judging every touch as ‘No match’. But as time passed, it started to adapt to my fingerprints and now I can unlock the device without any hiccups.

The Samsung Galaxy J5 Prime has a non-removable 2400mAh battery under the hood. Under heavy usage, which included navigating through the internet, watching videos and movies, and playing games constantly with lots of apps running in the background, the device got me a screen-on-time of 5 hours. Under moderate usage, the Galaxy J5 Prime lasted for a day and half. So, if you’re a heavy user, the device will last long without having to worry about charging it again and again. The only bummer is the absence of a removable back as there is no Quick charge. Even with the increasing number of new smartphone manufacturers and distributors setting their roots in Nepal, Samsung is still the bestselling device here. It sells some bang-for-buck devices, and that trend looks set to continue with the Samsung Galaxy J5 Prime. Even though its hardware specs are similar to some of the devices in the lower price range, the display, build quality, performance and camera are second to none. Except for its rare stutters and poor functioning camera under low light, overall the device is quite snappy. And just as its name suggests, it is a prime smartphone in its price range. You won’t regret your decision if you spend your hard-earned cash to buy the Samsung J5 Prime.

If you’re not impressed by the specs and performance of the Samsung Galaxy J5 Prime, here are some other options for you:

Priced at Rs. 27,999, the Redmi Note 3 Pro offers excellent performance with Snapdragon 650 SoC under the hood. It also offers a good 16MP rear facing camera and a huge 4100mAh battery.

Featuring an excellent design and a great battery life, the Meizu M3 Note is another good choice. However, the device’s camera is not good and the performance is average. It is priced at Rs. 24,995.

One of Gionee’s best smartphones, the Gionee S6s combines attractive looks, excellent build quality, superb front camera, and Android 6.0 Marshmallow out-of-the-box to go with an attractive price tag of Rs. 25,999. Having said that, you will compromise in 3 areas: performance, rear camera, and fast charging.