Xiaomi’s Redmi Y-series (S-series globally) smartphones have always focused on the selfie part. Last year, we saw Redmi Y2 (Redmi S2) with an amazing camera prowess. And continuing the legacy of the Y-series devices, Xiaomi has yet again launched a new smartphone in India. Motivated to address the selfie trend, the new Xiaomi Redmi Y3 comes with a 32MP front shooter.

Talking about the selfie camera, the 32MP sensor on the front cam is said to be 22.5-percent larger than the last year’s model. The smartphone also comes with Screen Flash feature to help in taking selfies in the low light scenarios. Even on the software part, the phone comes with plenty of upgrades. To ensure natural-like beautification in the real-time, the phone comes with AI Beautify feature, whose version this time has been upgraded to AI Beautify 4.0. 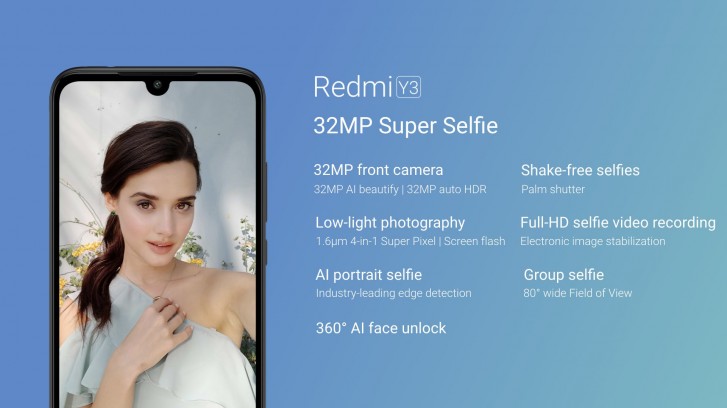 The phone also has two AI-Powered cameras at the back. The primary one employs a 12MP shooter, which is accompanied by a 2MP depth sensor for the portrait effects. The cameras on this device are also said to be integrated with the Google Lens.

On the display side, the phone packs a 6.26-inch HD+ display with a dot notch on the top. The phone comes with Gorilla Glass 5 protection to ensure better chances of survival during the accidental drops. The screen also comes with P2i hydrophobic coating on the top.

Snapdragon 632 is here to take care of the performance. In terms of memory, the phone comes in two formats: one with 3GB RAM and 32GB of onboard memory whereas the higher end get the 4GB RAM and 64GB internal memory. A 4000mAh battery fuels the device and Xiaomi has bundled a 10-watt charger in the box.

The phone will come in three color variants: Elegant Blue, Bold Red, and Prime Black and will go on sale starting from 30th of April. The device will be available for purchase through Amazon.in from that day onwards. Talking about the price, the base variant (3/32GB) will cost INR 9,999. Similarly, the price of the higher end variant (4/64GB) will be INR 11,999.