While AMD is getting there alongside Intel for some time now, they haven’t quite hit the sweet spot in the graphics cards department. AMD’s E3 2019 briefing focused mostly on its Ryzen 9 3950X CPU. However, they also did present their new graphics. The new Navi architecture is AMD’s latest attempt towards putting a dent on Nvidia’s earnings. However, this is not enough to reach glory for Team Red Ryzen. But here are the two of the first Ryzen GPUs…the glory shall come soon! 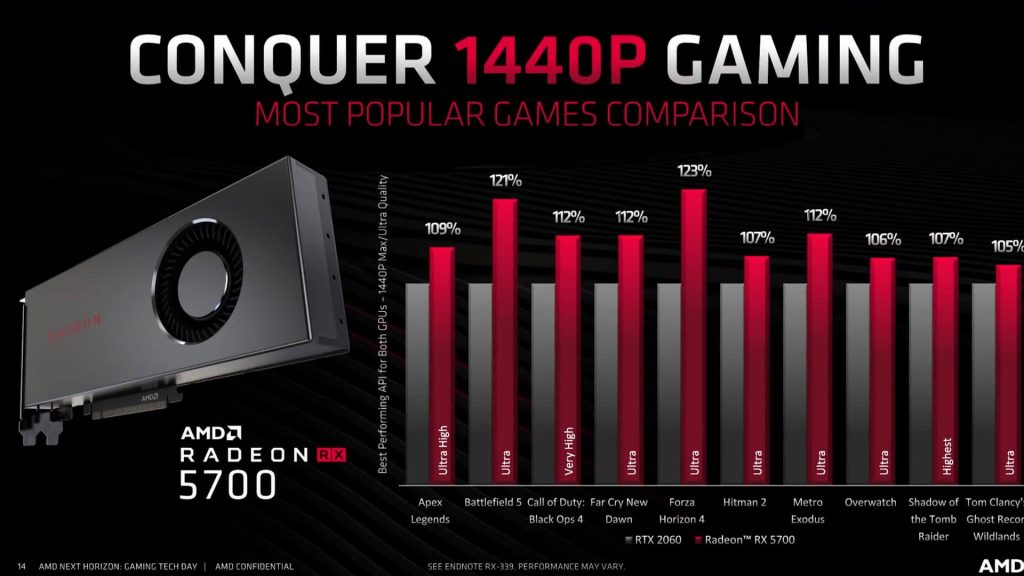 These two GPUs target 1440p gaming, and by the looks of it, offer identical performance as their Nvidia counterparts. AMD also claims these graphics cards are a worthy upgrade to their Vega 56. But to my disappointment, these GPUs have blower style cooling. They did this to minimize the loud sounds their cards are known to output, apparently. With this, the company assured us that their cards cap out at 43 dB, max.

Another feature worth discussing it the Radeon Image Sharpening (RIS). Using a contrast-detection algorithm, the idea is to make upscaled games appear as good as native 4K. They claim to achieve this without compromising on the frame rates or awkward softening (like that on Nvidia’s DLSS technology). In addition, AMD claims it can work on thousands of games without developers having to support it. That’s good news, but there is a small problem with this. Without the devs supporting it in their games, this cannot work on DX11 titles – only DX9, DX10, and DX12 along with Vulkan on Windows 10. So, the company is also working with some developers to integrate it directly into the games, which will be known as “Contrast Adaptive Sharpening“. And for now, the RIS is exclusive to 5700 series cards, but other cards will be able to use this too, in the near future.

This is AMD’s solution to reduce input lags, especially, in situations where the games overpower your GPU. And it will provide an edge in competitive gaming scenarios. It works by skipping a few frame rates (selectively) during the times when your CPU is waiting for your GPU to draw frames. However, it shouldn’t affect your gameplay in any way, according to AMD’s claims.

Right…so, by now, we can see that the only clear-cut advantage Nvidia seems to have over AMD is Ray Tracing. But that, too, hasn’t really taken off yet. And even in those games that do support it, you can’t tell the difference all that well. But still, AMD is trying to solve this shortcoming with their new RDNA graphics chips for hardware-related Ray Tracing. But it’s using the “select lighting effects”. So, for a foreseeable future, at least, we are looking at shader based ray tracing. This is similar to NVidia’s implementation of Ray Tracing for their graphics cards without Ray Tracing hardware. However, AMD says the full ray tracing features may only be available through cloud gaming, like Stadia or GeForce Now. And that’s a bit confusing as both the upcoming Xbox and PlayStation are promising hardware accelerated ray tracing through Navi based GPUs for 2020.

Putting it all into perspective, these graphics cards from AMD are trying, but looks like they still have a lot to do; especially, if they’re to compete against the high-end graphics of Nvidia. But these are just the first Navi based cards and we expect some more to come. The RX 5700 and it’s XT counterpart will be available starting July 7 for $380 and $450 respectively. In addition, we will also see the Radeon RX 5700 XT 50th Anniversary Edition with deep black chassis, slightly higher clock speed (over 10TFLOP marks) for $500.