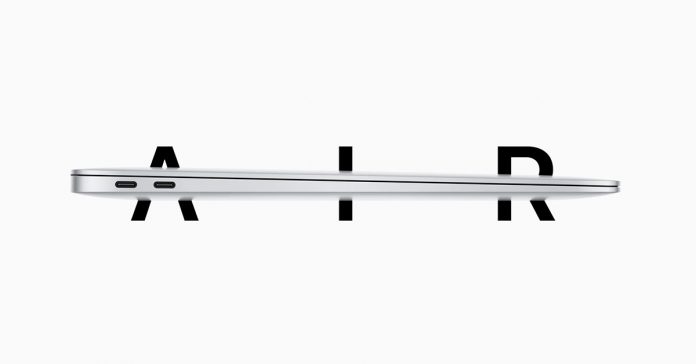 Many will argue that the Apple MacBook Air was the turning point in the history of laptops. A heavy statement, but true nonetheless. It was the first ultrathin laptop with an amazing build and a great performer too. Then came “just Macbook” with it’s even thinner, lightweight fanless design with just one USB C port. That’s when all hopes were lost for another MacBook Air refresh, up until yesterday. And in this article, I will be discussing all the best features inside the new Apple MacBook Air 2018. The new MacBook Air brings everything to the table. Starting with a 13.3″ 2560 x 1600 Retina Display that cuts the screen bezels by over 50% (compared to its predecessor). The laptop looks a lot better now with glass covering the whole screen up to the edges. Apple even claims it can show up to 48% more colors compared to its previous generation.

Apple gave up on the TouchID for its smartphones and tablets but seems like it’s a new feature for the MacBook Air. You can also use it for Apple Pay, secure your laptop logins and even secure password protected documents. It also comes with the second generation of Apple’s T2 security chip. MacBooks always had great keyboards, apart from a few generations in between. For this one, Apple is pretty sure that the new generation of the butterfly mechanism keyboard is better, and by a lot. They provide four times more key stability along with more comfort and responsiveness. The keys are individually backlit and come with an ambient light sensor to help with low-light typing.

The Force Touch Trackpad is now 20% larger, much more precise and a lot more pressure sensitive. There are two Thunderbolt 3 ports for data transfers, charging, plug in an external display or even an external GPU. The speakers deliver twice as much bass and 25% more volume. Then there is the new HD webcam with three microphones which should result in much better Facetime sessions.

The new MacBook Air comes with Intel’s 8th Gen Core i5 processor which can go up to 3.6GHz. The laptop is configurable of up to 16GB of RAM and 1.5TB of storage, although that will also bump up the price to $2,599. The base version with 8GB of RAM and 128GB of storage comes in at $1,199. There are no dedicated graphics solutions and all variants only come with the Intel UHD 617 integrated graphics.

The laptop weighs in at just 1.25kgs with a thickness of 0.61″. The frame itself is built from 100% recycled aluminum which emits 47% less carbon emission in the manufacturing process. The 6000 series of aluminum used should also provide an ample amount of strength and durability. Even with those levels of thinness, however, Apple still claims up to 12 hours of wireless web browsing and 13 hours of iTunes movie playback (50.3Whr).

But most people who will be buying this laptop won’t buy it for the above reasons. The main reason they will is the macOS operating system. The new macOS Mojave is the latest version of OS from Apple for Macs. There is a huge selection of features and improvements, not to mention all the new built-in apps, redesigned Mac App Store, Dark Mode, dynamic desktop, stacks, and a bunch of other features on top of the much loved operating system. In the box, you get the MacBook Air itself, a 2-meter USB-C charger and a 30W power adapter. There are three color options that include Gold, Silver, and Space Gray. We did hear a lot of rumors about a cheaper MacBook Air, but all that was put into rest when the pricing of the base model was revealed at $1,199. It’s a bit overpriced if you ask us, especially for just 128GB of storage. But we will let you guys decide if this one is a value for money productivity system or just an over expensive glorified web browsing machine.