ASUS has a wide range of laptops in their gaming category. But it’s safe to say that it’s their affordable lineups that are the most popular. And the Asus ROG Strix G531G is their latest affordable gaming laptop. which is their latest affordable gaming laptop. It has got the all-new 9th gen CPU and a GTX 16-series graphics card. And costs around $900. So, let’s find out if you are paying the right amount of money for this one in this review.

Starting off with the aesthetics, there’s hardly any difference in its design language compared to the more expensive ROG Strix Hero and Scar laptops. It’s a bit bulky but surprisingly compact for the size. But it’s not really light though. With a weight of about 2.4 kg, this is a standard weight for a gaming laptop. And about its looks – it looks different from other gaming laptops, as ASUS’s signature design is, classier than others. The outer lid is dual-tone with the brushed texture and the ROG logo on the side. One half is hairline brushed and the other is anodized. The logo doesn’t glow, but that’s not a bad thing, because, this means you can also take it to your workplace without worrying about showing off too much. Of course, for some, glowing logos are more attractive. But that’s all preference, and if you look at it as a work-thing as well, it’s pretty good.

The build looks metal, but it’s actually plastic. And even so, the build is really solid. It shows even when you just hold the laptop and the fact that it doesn’t flex on the keyboard deck, it just makes a stronger case for itself. There are air vents at the back and on the bottom, and there are also some ports at the back. Overall, a classic ASUS laptop design.

As for ports, the charging port, HDMI and the Ethernet are at the back, whereas, others are on the right – three USB-As and an audio jack. But that’s all. You don’t get USB-C or an SD Card slot, either. That means there are not enough ports, at least, for me. You won’t be able to directly edit your photos or videos due to the lack of the SD-card slot. So, if you do that, you have to get a card-reader separately.

When you open the ASUS ROG Strix G531G, you’re greeted by a 15.6” Full HD IPS panel display, and you get two choices of refresh rate here – regular 60 Hz or a faster 120 Hz. Ours was the base variant, a 60 Hz panel, but still, the display is better than expected. Viewing angles are actually good – better than some other laptops at this price range. But that also maybe because it cannot open up for more than 120-degrees. Brightness goes max up to 280 nits, but you get about 60% sRGB, which is, well, good enough for gaming, and media consumption, but not ideal for professional content editing.

And while the bezels are slim around the display, it’s not so for the bottom area. But even so, it didn’t stop them from making a bold move of removing the webcam altogether! Yes, you read it right, there’s no Web-cam in here…Strange!

Moving on to the keyboard…it’s your ASUS’s keyboard layout, so, it’s a bit different. You have the additional hotkeys on top for some functions that help take quick actions during gaming. However, what I don’t like about the keyboard is the size and the position of these arrow keys. They are small and placed imperfectly. Other than that, I have no complaints with the keyboard. The feedback is decent enough, the key travel is also okay…and sounds are soft but audible enough to be satisfying. There’s only a One Zone RGB lighting on the keyboard and you can change the effects from the ASUS Aura software. Also, there are 4 levels of backlighting to adjust it according to your needs. The trackpad is better than most other gaming laptops. It’s spacious, tracking is good and gestures are accurate. The physical buttons are also tactile. It uses Windows Precision Drivers, so, you get the gist.

On the power side of things, you get the latest 9th gen i7-9750H, which means great performance. And since it’s a high-end processor, there’s actually not much to talk about here. It only has an 8 GB of RAM in a single channel, but there are two slots, so you can slip another stick in and increase the performance with dual channels. 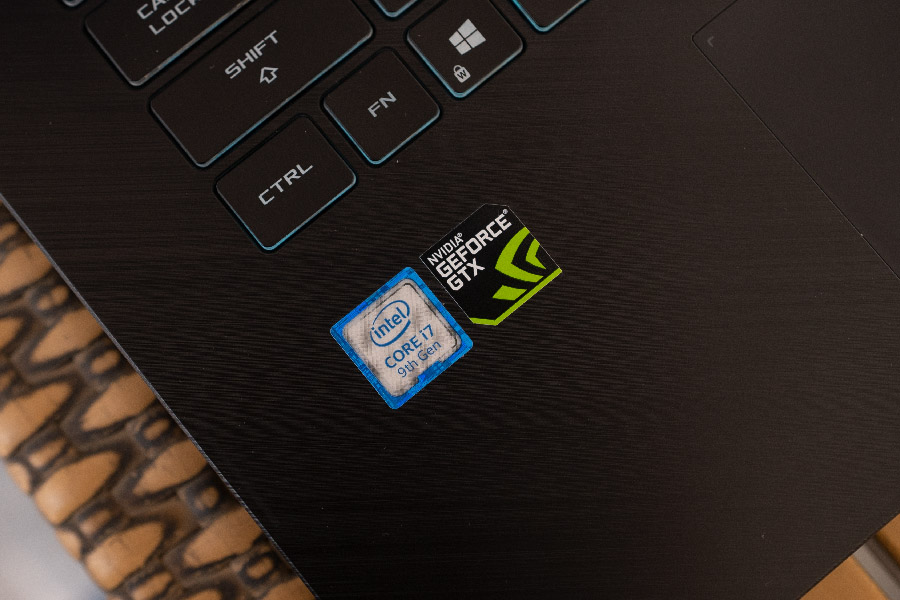 It handles things like video editing, and photo editing really well, but you might want to take the color accuracy into account. Just keep in mind that heavy apps run without any hitches.

On the gaming side, the GTX 1650, does as advertised. It’s 30% better than the GTX 1050 Ti but falls short of GTX 1060. But it does handle all kinds of games, in suitable settings. You get about 60 frames per second in Battlefield V on medium settings, and about the same on Fortnite on High settings. As for PUBG, you get about 45-55 frames per second on Ultra and 75-80 on Medium.

And as expected, the GPU is a bottleneck for the CPU, because while gaming, the GPU usage crosses over 80% every time but the CPU doesn’t go above 60%.

Still, rest assured that it will handle all kinds of games, and the temperature is also okay. What I mean is, it gets close to 100-degrees after like 2 hours of gaming, and there was also some amount of throttling. The dual fans do a good enough job, but it can’t handle long hours of stress very well, though.

As for the battery, it has 50 Watt-hour battery, which is, I guess, normal for a gaming laptop. It’s not enough, but it is what you get. And with this, you will get about 4.5 hours of battery life on normal usage but just about an hour or so on gaming. This means that you will need to carry around a charger.

In conclusion, the ASUS ROG Strix G531 is a good laptop, for the price. It has the latest of Intel processors and does include a wide variety of graphics card options. The one with 1650 is kind of a bottleneck on the performance, but you can choose from a lot of configurations.  And if you get the one with 120 Hz display, it’ll be even better.

On top of that, the stellar build quality makes it even more appealing. Sure, it’s not as flashy with only a single zone RGB, but that depends on your preference. I like it as it is, it makes its presence known as a gaming laptop, but in a subtle way. And that, in my opinion, is close to perfect balance.