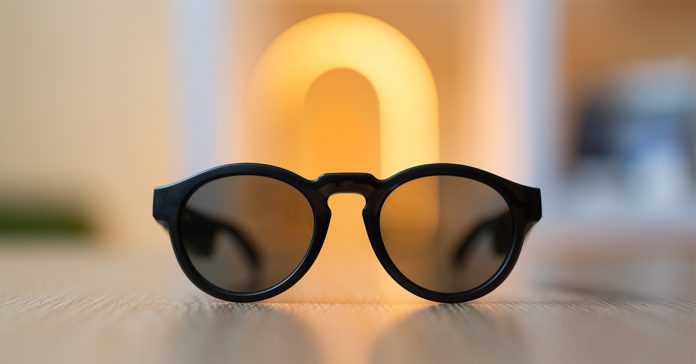 I cannot imagine leaving my home without my trusted pair of earphones. But I also have trouble keeping them in my ears on these hot summer days. It’s a dilemma that no one was able to fix…until now. “Want to play music on your sunglasses?”, asked nobody ever. And no one thought anyone needed one. But Bose did! And they came up with the Bose Frames – which are much more than just premium sunglasses. But while they are multifunctional sunglasses, are they worth spending more than your regular sunglasses or wireless earphones for that matter? Or can they give you the satisfaction of premium Ray-Bans? Find out in this Bose Frames review.

The Bose Frames, upon first look, are like any other black sunglasses. They come in 2 distinct styles: Alto and Rondo. It seems to me, that naming is not their strong suit, sounds kinda Retro if you ask me. But the difference is that Rondo has more round frames and is a bit narrow, while the Alto is wider and has a square design language. But whichever you choose, you can only do so in black. And both of the models offer the same technology and features when it comes to audio and AR capabilities.

The Bose Frame ‘Alto’ reminds me of Ray-Ban’s Wayfarers, ‘Rondo’ seems similar to Ray-Ban’s Clubmaster series, but the lens’ frames are much thicker. But I like how the technology that resides within the frames is not noticeable from the front. However, from the sides, the thick arms are a major give away. They are, after all, much bulkier than your average pair of sunglasses.

As for the build quality, Bose claims they’re made of “Ultramodern materials”. But of course, that’s marketing for you. It’s actually got a polycarbonate construction, with polarized lenses, giving you the impression of normal unisex sunglasses. And that’s all well, except the build feels slightly cheap and a bit light, at 45 grams. Still, there’s some sturdiness to it. And the fact that it is light, helps you keep it on your ears for long hours as well.

There’s also a multi-functional golden button on the lower rim of the right arm. It helps to control the overall functioning of the device except for volume controls – for which, you have to resort to your phone.

Users have the option to switch the lenses on their Bose Frames from the regular polarized ones with some colored ones. Sadly, I only had a single lens with me and thus didn’t get the opportunity to try this feature. However, separate lens cost extra and you can purchase them along with the frames. The lens that we tested were the standard ones – a sort of black filter that is capable of blocking out 99% UV light – so the company claims.

Overall, I felt that the Bose Frames design gives the wearer a simple yet classical look and does a good job functioning as your traditional sunglasses. However, its bulkier size does means that the frames will seem a little on those with smaller head size. But then again, people won’t be pointing you out on the streets – you’ll blend right in.

The Bose Frame houses the smallest and the slimmest Bose System till date. It features 16mm custom transducers on both its arms and right next to them are the microphones. The sounds are delivered through three speaker ports situated on the bottom rim of each arm. And there’s another port on both arms to cancel out background noise. That can sometimes fail in noisy environments, but it works for the most part. Overall, the noise cancelation system pleased me as I was able to enjoy my music while others blabbered around me. These glasses connect to your phones via Bluetooth. The golden button on the arm allows you to play and pause music and answer calls. Double click on the button skips a track, while three takes you to previous. For calls, a single press will pick it up, and a long press will decline it.

But calling on it can be a bit of…I don’t know how to put it. I had instances of people staring at me, thinking I was talking to myself. Little did they know I had the future on my eyes…

However, the Bose Frames AR needs some polishing. The AR offers you some 3D Audio experiences but is fairly limited to golf and some walking directions, at least on Android. On iOS, though, it can detect your location, the direction you’re facing and feed you directions. But due to the lack of a good app, it can use a lot of improvements.

For now, the only feature that will come in handy is being able to access Google Assistant. However, I feel that there’s still a lot of potential in that category which Bose will hopefully develop and integrate into its future devices.

The Bose Frames sound great for what they actually are. With the help of 3 speaker ports on each arm, the sound quality it delivers is really good. In fact, it was much better than expected. Even though the audio doesn’t go directly into your ears, the position of the speakers directs it to them.

The audio performance became clear to me after listening to some music and podcasts. Music tracks sound crisp and clear, whether it was Mariah Carey’s “Shake It Off” or Ludacris’s “How Low”. The sound system consistently delivered rich sound, both in low and high volumes. And it was the same for Bollywood songs as well. The sound quality has the energy and depth, and some good separation. The major downside, however, is its inability to deliver proper bass. It may be the fact that it’s small, or because of the lack of a bone-conduction technology, but it doesn’t do bass justice. So, if you’re into bass music or are a metal fan, it will disappoint you. But then again, it works good enough for all other purposes like calls and podcasts.

Also, Bose claims that the sound leakage is just 1%. It sounds a bit exaggeration, but if you have your volume at 50% or lower, people around you will hear nothing unless their full concentration is on you. So, that part is plausible. But anything above 60% and others will certainly hear whatever you’re listening to. You should also see the look on their faces while they try to figure out where the music is playing from!

But a bit of high volume is necessary for a busy street or so. And while lunching in a busy restaurant with the volumes at max, my friends pointed out that they could clearly hear the music. So, you gotta be careful in those scenarios…if you want to avoid some double-takes from others. In addition, when you go above 80%, you’ll also face distortion.

Calling on it is also loud and clear. I faced no difficulty to hear the other end and similar was the case from their perspective. The mic seems aptly placed, but I had instances where I faced difficulty while answering calls during rush hours, during traffic. And during those times, I set the volumes to about 60% while in quieter places, about 30% will do the trick.

While the Bose Frames are great for the most part, the disappointing thing about it is the battery. Even the lack of proper bass on it didn’t bother me as much. But the inadequate battery backup is a different story. Bose claims that the device provides up to 3.5 hours of battery. And I did manage to get close to that. However, I felt it was a bit too short, especially since its case doesn’t pack charging capability like other wireless earphones like the Apple AirPods or Galaxy Buds. It’s a normal case for sunglasses. And in comparison, the AirPods provide 5 hours of listening time while the case can charge it 3.5 times over. So, I felt like this is an area it lags behind. Charging the battery fully takes somewhere around 2.5 hours via the magnetic clip-on at the side. The position of the charging ports is very comfortable and won’t bugger you while wearing them. It’s just that I wish I could get a charging case, but sadly, Bose didn’t design it that way.

So…what do I have to say about the Bose Frames? Well, these are not your average everyday shades, but also a set of very capable earphones. People may give you weird glances when they see you talking to yourself on the streets, and you might feel out of place. But that’s mostly the case for every time a new tech comes up. Along with that is its untapped AR potential. Maybe one day you’ll be able to answer calls by nodding and reject them by shaking your head! However, given its price, I don’t know how many early adapters there will be. The price of $199 looks a bit steep, and here, in Nepal, a price of Rs. 31,500 is even more concerning. With Standard AirPods, providing the best audio quality among wireless headphones, available at Rs. 26,500, you’d still have Rs 5000 left for a pair of premium shades. But then again, what other shades also act as your wireless earphones?

But despite that, these shades can’t replace your earphones altogether. While it will do the trick during the day time, you wouldn’t wear them during the evening or night time to listen to music…or anything else.

So, is the Bose Frames worth its price? For those who want the latest and the best…definitely! This is something that’s not only new but also fascinating. But for the general population, I’d have to say no for the time being. However, with future upgrades, it might get better in terms of battery life and audio enhancements. Maybe then, I’d probably consider getting one.