Home CAN Infotech CAN info Tech 2015 : What I experienced 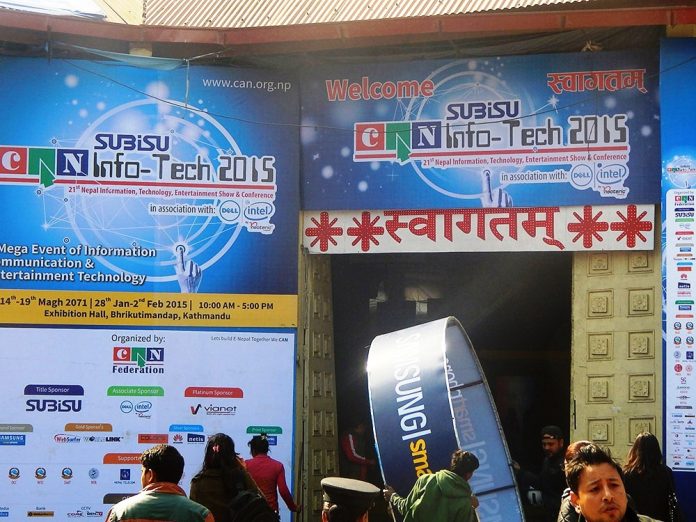 It had already been a couple of years I hadn’t visited the CAN info tech. But this time I was excited to Visit the CAN info tech. I was exited in the sense it was a great time for me to learn and share my knowledge from this info tech to everyone interested. I had been to different Tech exhibition in Finland which included the Slush 2014. It was a great experience for me to be a part of that program.

As per the trend and the swift increase in the standards of technology, a huge number of people have been attracted to technology field in Nepal. Even my father who used a mobile phone used it for phone calls and messages now asked me about how he can keep his data secure in his smartphone and what can he do find his mobile if he loses them and many more question regarding his smartphone.

We the team of Gadget Byte were guessing and expecting what CAN info tech 2015 can give the entire tech lovers. Me myself because had not been to CAN for a while was expecting a lot from this event.

It was January 28th and the first day of CAN and I was there the event Venue (Bhrikutimandap) at 10 am Sharp. Since I was a participant in this event I had an event ID which let me in swiftly. The ticket Counter was not crowded but there were some people just around the entrance. My eyes went to the stalls which were under construction. The inauguration ceremony had an hour to start and the stalls were not still ready. This already was a letdown for me from the largest info tech event organizers (Computer Association of Nepal). The different stall equipment was lying in the road which even blocked to way for the visitors.

I was unaware when the inauguration ceremony happened because I was excited looking for what this exhibition had brought for the Nepali Tech lovers. Yural and I, we looked at the stalls which helped us make an overview about the event. Then Biswash joined us which made us the complete team and we started our work.

I had an objective in this expo. Learn and share. I wanted to take a lot of knowledge about the latest tech in Nepal. But unfortunately this Info Tech was not that event I could have thought that someone can be excited about. I found it as a business trade fair where every stall had item to sale with heavy discount and offers. To be honest, people who were in their respective stall were looking at each other’s faces when asked about 5th generation laptops and some were unaware about what they had in their stall. The visitors were just told he list of specification of the products and the price. And when further asked in detail, was not able to answer. Moving ahead one thing I found interesting was when I saw the New Windows phone of Colors Mobile. We were able to talk to the Microsoft representative for windows. The noise from the big huge speakers were really bothering people but it was really out of any ones control unless there has to be rule. The noise from the huge speakers made it really difficult for the people trying to listen to the stall representatives.

Another amazing thing I was able to find there was the Zen Book by ASUS. These were the technology I always wanted the market to have and the tech lovers to use such devices. Another Smartphone which was being anticipated by our gadget byte team was the Sparkle V Android one Phone. Even though it was not there for sale but the booking was open. I was upset with Karbonn Mobile that there was no much promotion done so that people know about the budget smartphone which can make a huge market in this Country where people are craving for a good smartphone.

The Kivi’s smart watch was a good addition to the Tech event which showed their market competitiveness and as same as the Android One smartphone this was only available for booking. But there was a bit of promotion they had done which I felt had to be done in huge stage to show case their products in a centre stage.

A trend in Nepal is such a bad one that people don’t look what laptops or smartphones they want, they go into a shop and listen what the sales representative say. I think buyers need to put an effort to learn about what they are buying. This can help people to make a full use of the devices they own.

Finally I have some points that I want Computer Association of Nepal to listen and take action in make order to improve its status like the biggest info tech events like Mobile World Congress MWC or Consumer Electronics Show CES.