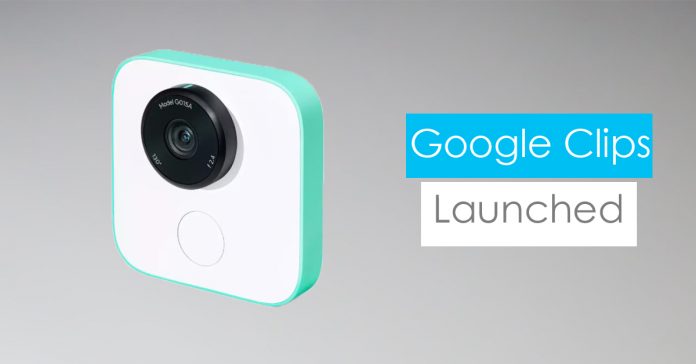 We all want our precious moments to be framed forever inside photographs and videos, which helps us to relive such moments whenever wanted. But all that need is a good photographer/videographer. In addition, some of such special moments are so abrupt making it impossible to grab a camera and shoot the moment. But, no worries, Google has brought the solution for such scenarios in the form of Google Clips.

Google Clips is a smart hands-free camera that is capable of taking pictures all by itself. In its miniature size of 2 square inches, is the lens, sensor and clever sets of algorithms to define exact moment to capture, simply making it smart. Furthermore, Google Clips is quite unlike the digital cameras or action cameras as it lacks a viewfinder. The device also lacked shutter button when conceived, which, however, can be found in its final state.

“We used to not have a button”, Eva Snee, the user experience lead for the camera explained. “And then we put a button in because we learned from real users- outside of Google- that a camera needs to have that agency.”

A smart-camera named Clips, the nomenclature sounded confusing. But contrary to the other cameras, which capture photos or videos, Google Clips records snippet or motion pictures. As such snippets lack sound (since the Google Clips lacks microphone), such snippets are termed as clips. The clips are several seconds long, which can be exported as Motion Photos, GIFs, JPEGs or movie files. Since the device captures such snippets in 15fps frame rate, a high resolution still image can even be extracted from the snippet.

The device features machine learning and it gets acquainted with the faces that come frequently on the frame. The device gets gravitated to such people and takes their shots more often. The device is designed especially to work on kids and pets (cats and dogs). And according to the Google Clips team, the device worked seamlessly with the designated demographics and also worked well with goats.

The device is priced $249 and is currently flagged as “coming soon”. We are eager to see how Google will dazzle the world with Google Clips when general enthusiasts have their hands-on on the device.