Home Cryptocurrency A Bitcoin Believer sold everything for Bitcoins 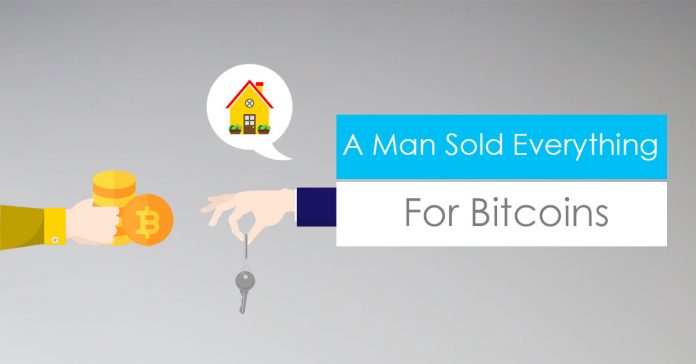 To what extent do you believe in Cryptocurrency taking over the world? You don’t? You think it is going to run the world in the coming years? Hold your thoughts for a while. The world has already found a true believer of Cryptocurrency and Bitcoins revolution in a 39 years old Netherlands native: Didi Taihuttu.

Didi Taihuttu put everything that he owned up for sale- including his house, motorbike, electric bikes, children’s toys, clothes and shoes,  his house up for sale; and went on to live in a campsite near Venlo in the Netherlands. What did he get in exchange of all this, you ask? Bitcoins and other crypto currencies is the answer. Yes, believing that bitcoins and blockchain technology are going to transform the role of money and banks in the society, Taihuttu took the leap. To quote him:

“People will say,’You’re crazy.’ But we are an adventurous family and are going to gamble for a moment to live minimalist lives. If you never take a risk, life is boring.”

But the step he took seems so much more than a risk, doesn’t it? Let’s delve more into how he has been living as of today.

Also Read: Getting Started with Bitcoins: How to get Bitcoins?

Taihuttu and his wife shared that they had taken the decision to sell their possessions  in the summer of 2017. He had been running his own company offering computer courses in Venlo for the past 11 years. Last year, after his father: John passed away, the family had a difficult time. Realizing that they had had enough, the family decided to go travelling. Hence, they sold the business and went on a nine-month world trip through Asia and Australia with their three daughters, from which they recently returned.

So, how did Didi Taihuttu come across crypto currency?

While he and his family were in the tour, they met a lot of people using digital coins. Didi added that in Bali, he had met a South African exchange trader who resigned after 17 years and went into crypto trading, and on the beach near Noosa in Queensland he spoke to someone from Dubai who was trading in bitcoins. Taihuttu said that he kept in touch with those people via Skype and analyzed the daily cryptomint trade. He added that these counterparts had a lot of experience in this sort of trading and also said that he himself had been aware of these coins since 2010, when it was worth less than one euro. In the current scenario, a single bitcoin is worth more than $4500 with the current valuation.

As he is an entrepreneur, he was encouraged to invest and work on bitcoins since the first time he learnt about them. He teamed up with a friend and set up a physical business to mint bitcoins after buying dozens of computers and video cards. And then, when the value of Bitcoins escalated to several hundred euros in 2013, he decided to sell the entire stock of coins. To this he says:

“If I had known then that four years later it would have been ten times more valuable, then of course I wouldn’t have sold everything. But then I thought: I have to make a profit.”

Afterwards, the value of Bitcoins plunged, his electricity and property rentals skyrocketed which prompted him to invest on Dogecoin, a smaller emerging currency. However, things became a bit different in the spring of 2017. Dogecoin’s value had soared to ten to twenty times its previous worth, Bitcoin’s value rose to $3,000, and other crypto currencies also followed suite. Also, the fact that he continued to meet so many Bitcoin traders on his family’s world trip was a sign for him to get back to minting crypto currencies.

Also Read: What is Cryptocurrency? Money of the future?

Having to choose an entirely new lifestyle while pursuing his belief on crypto currency, the Taihuttu family had to get used to a chalet on a campsite instead of their luxury four-bedroom, 200-square-meter house. Taihuttu’s three daughters, who had a room each for themselves, now all bunk in together. The family says that they are still keeping other items on sale to buy as much Bitcoins as possible.

For how long will the Taihuttu family keep this going on?

The family will continue this way until 2020, at which point Taihuttu hopes Bitcoins and will be irreplaceable and his wealth will be worth three to four times as much.

But what if things go wrong?

To this, Didi Taihuttu says:

“Then we will be without money for a moment. But I don’t think that that’s the worst thing that can happen in life.”

A shout-out for his optimism and hope from my side!

What is your say on Bitcoin and crypto currency? Let us know in the comments below!