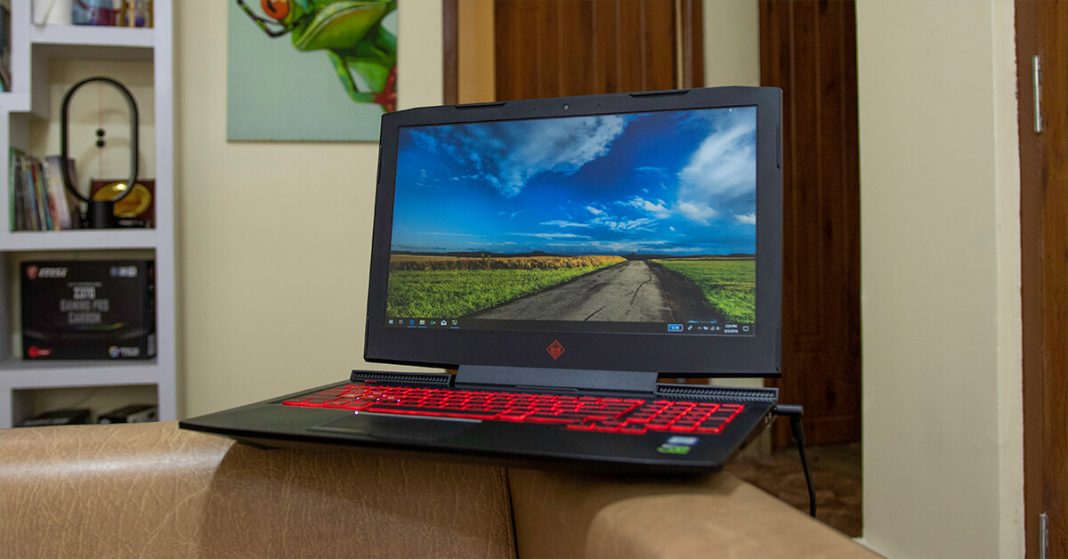 The HP Omen 15T can be an overkill for most people. But for us, it was pure joy, with all the linings and all the reds in all the right places, we think this laptop looks pretty “dope”. It also gets a nice spec sheet and an acceptable price tag. The build quality is also not that bad and you probably won’t regret buying it.

I must say the laptop looks pretty good, but what’s even more impressive is it’s build quality. Initially looking at the laptop, it does feel a bit flimsy and not very durable. The top is made up of more than one layer of plastic, all for aesthetical purposes of course, but it’s not really so bad once you start using it. This is one of the most typical gaming laptops out there. With a huge multiplication sign on the top and on the bottom of the keyboard, you know what you’re getting into. It also goes all in with the red sprinkled all over the laptop. The top and bottom are plastic, but the palm rest including the keyboard area is all metal.

Opening the lid, you are greeted by a 15.6-inch 1920×1080 IPS panel. It’s not really a bad panel but anything other than gaming and you will find yourself on the frustrating side of life. It just doesn’t produce a lot of colors, or what most people call accurate color reproduction. Technically, the display is capable of producing about 65% of sRGB and 49% of AdobeRGB color spectrum with brightness hovering at around 213nits. 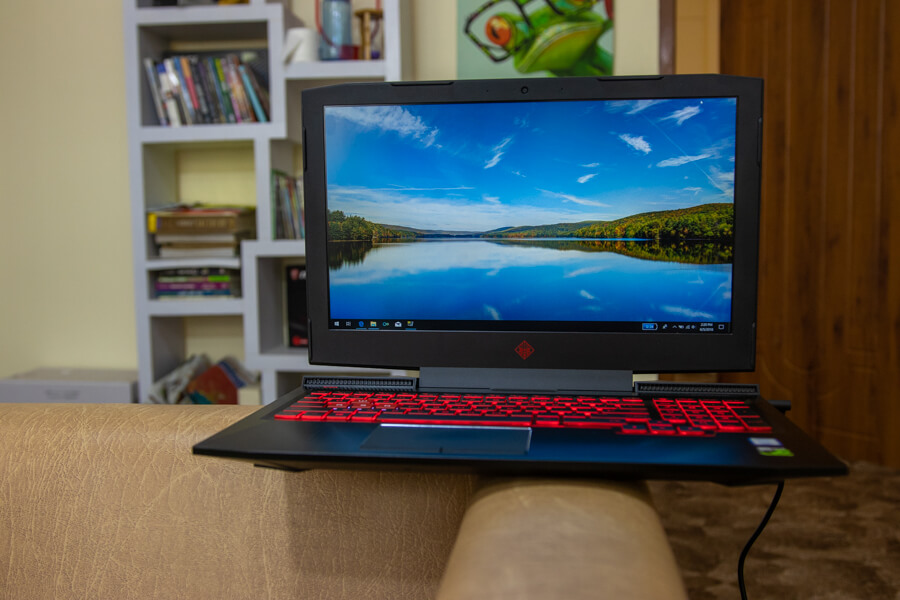 If that makes no sense to you, then let me explain. It’s a bad display, with average color reproduction. But most people won’t mind it and it’s still a really usable and sharp display. The display is also capped at 60Hz, but there are [email protected] and [email protected] versions available as well. Those also provide better color accuracy and are much much brighter.

The laptop performs pretty decently, with an Intel Core i7 7700HQ processor paired with 8GB of RAM and 1TB mechanical hard drive. Now, I felt the laptop performed very well, as so it should. It has one of the best processors of last year. The CPU also goes very well with the GPU in hand, with a bit of bottleneck. It’s fine, as the GPU bottlenecks the CPU and not the other way around as far as gaming is concerned, isn’t it? It features a GTX 1050 with 2GB of GDDR5 VRAM. Some might call it entry-level for gaming, but for those average users, it is going to be more than enough. It’s definitely better than last year’s 950M or even the 960M. We like to think it goes toe to toe with the 965M. You can play most games at medium to low settings without compromising on the resolution. If you lock the fps at 30, you can even get away with high configurations. I suggest you choose more frames per second over quality, but everyone has different priorities.

As you can see, the HP OMEN 15t barely runs PUBG at 60fps under the lowest settings possible. Other games like FIFA 18 and Rocket League ran at well over 90 fps under ultra settings, which was quite impressive. All in all, it’s a pretty capable card, especially considering the price.

The GTX 1050 is an average GPU with good thermal performance. The minimal heat it produces is pretty impressive, with temperatures that never crossed 50 degrees. Ideally, it stays at around 30 under normal usage and goes up to 47-degrees after an hour of intensive gameplay. It also throttles very less. Safe to say it does pretty well with thermals. The 1TB of Hard Drive feels a bit feels a bit sluggish though, for eg booting the device will take over 2 minutes and just opening Google Chrome takes about 10 whole seconds. Although it can be fixed by adding an M.2 SSD, which the laptop supports by the way. I am not saying the laptop is actually slow, but after using machines with SSDs for a few years now, I can’t seem to grasp how slow hard disk storages actually were.

The keyboard was clicky and the typing experience was satisfying. I also like the 2 levels of backlit keys. The second stage only lights up the WASD keys, which I feel looked good under dark conditions. Then there is the usual red backlit, which comes standard just like on all other gaming laptops. 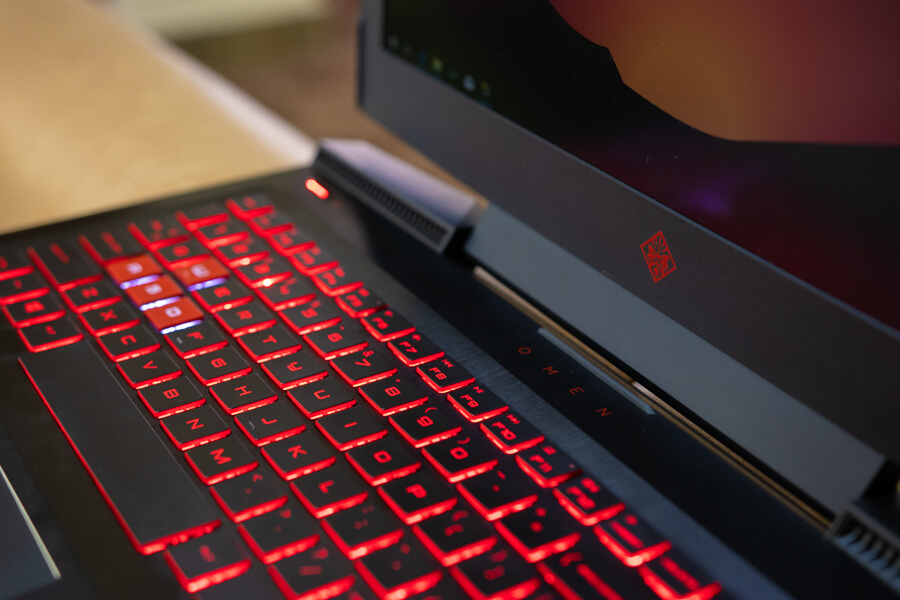 The trackpad, however, is pretty bad. It has clicky right & left buttons, but the tracking just gives it away. This is one of the worst trackpads I have ever seen on a gaming laptop. The gestures work ok but the tracking feels inconsistent and inaccurate.

I have had no particular connectivity issues, thanks to the HP Omen 15T’s ample ports for all my needs. The USB C port touch is a nice touch although 4 lane PCIe support is optional. The onboard speakers do a decent job. It produces punchy sounds and is acceptably loud. You can’t properly game on it due to the loud fans, but for movies and music, they are fine. This laptop comes with a 150w power supply. The charger is sleeker and more compact in size than my 130w charger. The battery life is good for a gaming laptop as I got around 4-5 hours of life under normal usage. Gaming was also possible for around an hour and a half. It’s a 67Whr battery on a gaming laptop so I didn’t expect much at first either. 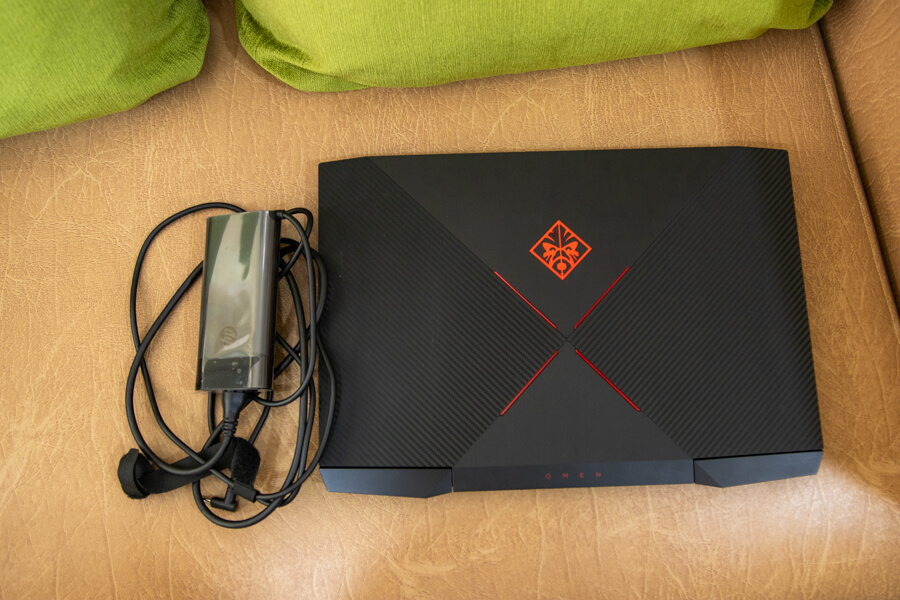 So, for Rs 1,00,000, you get an i7 7700HQ processor, 8GB of RAM, good thermal performance, a nice keyboard and an entry-level GTX 1050 on the HP Omen 15T. What you don’t get is fast storage. Due to the same reason, the laptop feels sluggish overall, but all you need is an SSD to fix that. The trackpad and display aren’t really something to be proud of either. But should you buy it? Well, for the same price you can buy something like the Acer VX 15 with almost exactly similar specs. So, it’s basically an aesthetical choice, because the VX15 has good thermal performance too. There is also the Dell 7567 with a GTX 1050Ti but only has a Quad Core i5 processor.