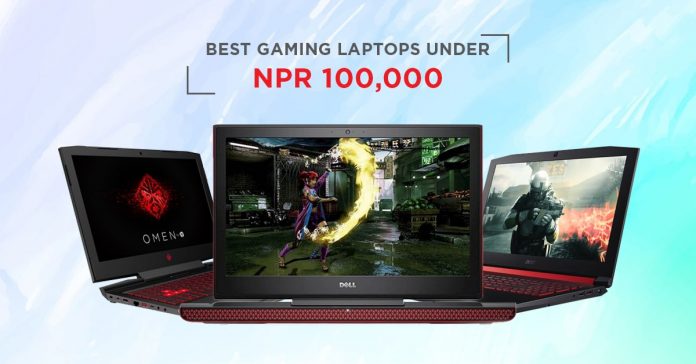 Are you thinking of getting a gaming laptop in Nepal, but confused on which one to get. Don’t Worry! We came across some amazing gaming laptops, especially in the budget segments. Gaming laptops are no longer remain exclusive for only those capable of paying a huge price. In fact, even at a reasonable cost, you can get a decent setup. So, what more, let’s look at the best gaming laptops you can currently buy in Nepal under the price tag of one Lakh.

In this list of a best budget gaming laptop, you should at least expect a Full HD display with a 60Hz refresh rate. Although, the panel might not produce accurate colors and is not ideal for professional graphic designers and colorists. In addition, under 1 lakh, you should be able to get enough horsepower to run the latest AAA games in medium settings at around 50-60fps. Here, you should be able to get either an 8th or 9th generation i5 H-series processor from Intel with 45W TDP. Similarly, on the graphics front, you should either get the GTX 1050, 1050Ti, or 1650 GPU. Since Nvidia GTX 1650 is the newer version, it is marginally faster than the other two.

Summary list of best Gaming laptops under 1 Lakh in Nepal

The cheapest budget gaming laptop on our list is the HP Pavilion 15 Power.  It is a perfect combo of style and power, and that too at just the right price of just Rs. 85,000. Yup! That’s what best sums up this laptop. Hands down it is one of the best gaming laptops under 1 lakh in Nepal. And with its “Acid Green” accent, the HP Pavilion 15 Power is one of the coolest looking ones as well.

It is a great choice for those who want a good gaming setup without completing their pockets completely. It has a 15.6” IPS FullHD display, 8GB RAM, 256GB SSD, and GTX 1050 Ti graphics. The only concern here is the mediocre Ryzen 5 mobile chipset, which isn’t as good as its Intel counterpart.

In terms of core gaming performance itself, this laptop can run most graphics-intensive games in medium settings at playable fps. However, you’ll have to minimize or disable certain aspects of the games to achieve that besides graphics settings itself. Another impressive set of features on the HP Pavilion 15 Power is the front-firing dual stereo speakers; tuned by Bang & Olufsen

Lenovo L340 is another entry-level gaming laptop and is priced just below 1 lakh in Nepal. Unlike the HP Pavilion 15, you get an Intel i5 9th gen CPU, which is more powerful than the 3rd gen Ryzen 5. Similarly, you also get a much power NVIDIA GTX 1650 GPU as well. Hence, you are going to get a better fps per price with the L340. In terms of design, unlike other laptops in this list, it doesn’t give the gaming vibe. Hence, you can take this with you in your business meetings or lectures. The display quality is better as well, with 65% of sRGB coverage. With privacy in mind, Lenovo has also added a physical shutter for the webcam, which you can turn on/off anytime. However, one thing that’s disappointing is how the Lenovo Gaming L340 has a single RAM slot; thus effectively denying dual-channel memory configuration.

Legion series is a mid-range gaming series from Lenovo. It is popular among gaming enthusiasts because of excellent thermals and sturdy build. Its the best looking and well-built laptop in our budge gaming list. Coming to the internals, the Legion Y450 has an Intel i5-9300H CPU paired with a GTX 1050 graphics card. Similarly, you get a 15.6-inch 1080P display with 93% sRGB color gamut, which is fairly color accurate given the price-tag. 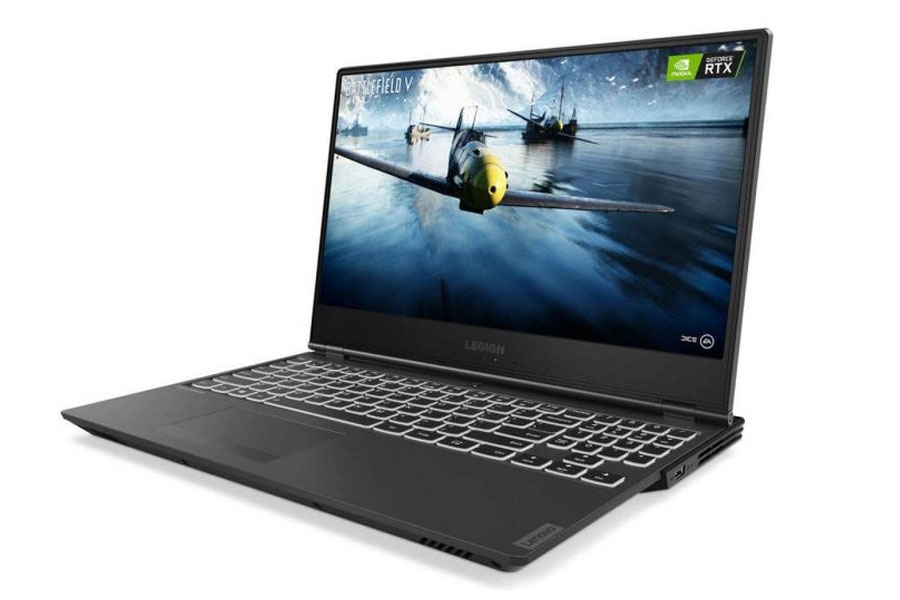 With this level of color-accurate display, the Lenovo Legion Y540 could also be a good option for an intermediate level of photo and video editing. And while the display is pretty clean all-around, it does have a massive bezel on the bottom with the “Legion” branding. The laptop ships with 1TB of HDD, and you can also upgrade the system by installing an SSD into the M.2 PCIe slot available.

MSI is a brand that is synonymous with gaming laptops. And why wouldn’t it be? After all, it has manufactured countless high-end gaming laptops over the years and MSI GF63 is no different. Even though it is a budget gaming laptop, this one tries to deliver the maximum performance. With a 9th Gen Intel i5-9300 processor, 8GB RAM, and Nvidia GTX 1050Ti graphics as a part of its setup, this device can run most of the modern titles. And with a few tweaks here and there you can even get decent frame rates in the games. The MSI GF63 is also a good option to those who want a thin-and-light gaming laptop. Weighing just 1.86kg, this is the lightest laptop on this list. Yet, the lighter chassis also comes at a compromise of thermal performance. It has three heat pipes and a single fan, which may cause some heating issues. Because of this, you may have to use the device in an underclocked setting to avoid any thermal throttling. This one also has a vacant RAM slot, on top of a 2.5-inch HDD bay for memory upgrades.

Asus ROG Strix G531 is the cheapest laptop under 1 lakh in Nepal with a 120Hz display. There’s a 15.6-inch Full HD display in here along with Intel 9th Gen i5-9300H 45W processor. For graphics, you get the modest NVIDIA GTX 1050 in here. Although you can get 120fps frame rates in the low end and mid-tier games, 1050 should be able to provide the stable 60fps in high-end games in medium settings.

Besides being the cheapest laptop with 120Hz in Nepal, the ROG Strix G531 is also the most affordable of ASUS’ ROG lineup of laptops. It has a pretty neat cooling system with two heat pipes reaching to CPU & GPU. The two fans, on the other hand, are also quite unique. They suck air from the bottom of the laptop as well as from the ventilation holes up top. In terms of upgradeability, you have 2x RAM slots that can take up to 32GB DDR4 RAM, 1x M.2 PCIe slot, and 1x SATA port.

Asus with its TUF FX505GT brings the latest 9th gen CPU and Turing based GTX 1650 Graphics. While you generally get 256GB SSD under Rs. 1,00,000, Asus is also offering double the storage at 512GB. Similarly, the TUF series is well-built too with modern looks. It has a military-grade “MIL-STD-810G” certification that ensures the robust nature of the device.

Being a gaming device, the ASUS TUF FX505GT brings more than just a powerful performance. Complementing that is its cooling and anti-dust system. You can also trigger three modes of fan performance “Silent”, “Balanced”, and “Turbo” using the dedicated button. The gaming vibe of the laptop is further complemented by the trapezoid cut on the lid resembling an ‘X’ market, and a single-color backlit keyboard; with highlighted WASD keys.

The Acer Nitro 5 has once again pipped a product with a similar spot for the best budget gaming laptop. Like the TUFFX505, the i5-9300H and the GTX 1650 is a really great pair, especially considering the price. If you want anything more than that, you are going to need to pay significantly more. This one also comes with a slightly better storage option, a combo of 128GB SSD and 1TB HDD. Similarly, like other laptops in this price tag, it comes with a plastic build. That being said, it is more studier and well-built than the others.

We were also particularly impressed with the Nitro 5’s battery. It is a 4-cell 57Whr battery which can give you about 5 – 6 hours of endurance, depending on what you use. You can also have finer control over your fan speed, CPU frequency, etc. using the “Acer Nitro Sense” software. Furthermore, this laptop also has a great option in terms of storage. There are two M.2 NVMe slots and a SATA port.