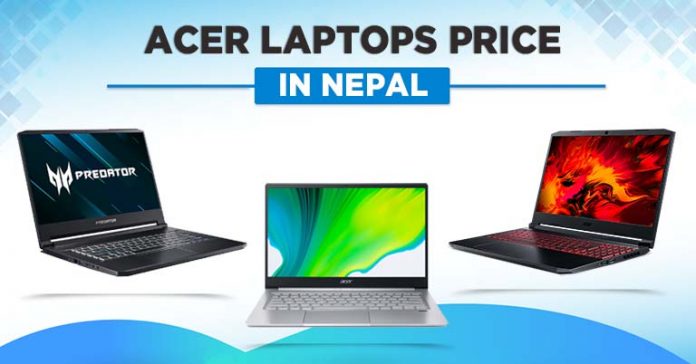 Acer offers a wide range of laptops, from budget to ultra-high-end gaming. Take the Aspire and Swift series, for example, these aren’t the sturdiest but the specs are appealing when you consider the price tag. Similarly, the Nitro and Helios series has some of the best budget and midrange gaming laptops. In this post, we have prepared a list of all the Acer laptops that you can buy in Nepal right now, along with their specs, price, and availability.

Mercantile Office System is the official distributor of Acer laptops in Nepal. You can find the official showroom for all Acer laptops located in Durbarmarg. These laptops are also available through different local vendors, especially in Putalisadak and Newroad. However, the laptop models available via Mercantile is quite limited. Thus, we suggest checking out stores like ITTI, Zozo Hub, and LDS that sell Acer laptops unofficially via grey channels. Hence we have divided them into different series that they’re based on. Also, we’ll not be including Intel 8th/9th gen powered Acer laptops in this list since they’re rather outdated in 2021.

Starting our list of Acer laptops price in Nepal is the Aspire series. It is a starter lineup of laptops from the company. Compared to the Swift series below, these devices are slightly bulkier. As expected, you’re getting the basic specs-sheet which consists of an Intel U-series CPU, an integrated GPU, SSD storage, and more. Acer Aspire series also brings plastic build quality contrary to the premium aluminium/metal finish.

Here, the Acer Swift Series is all about portability. The laptops under the Swift series usually come with sturdy metal construction. They are also light and thus, portable. Also, you can choose from a wide range of specs and features. You can buy Acer Swift series laptops in Nepal with both Intel and AMD CPU.

If you want a gaming laptop but don’t want to spend a lot of money, the Acer Nitro series is for you. The laptops under this series offer a powerful high-TDP CPU, a dedicated GPU, and other gaming features but on a budget. You can also find a touch display and 360-hinges in the Nitro Spin laptops. It could also turn out to be a decent choice if you are starting out on content creation. However, these are not available as of now.

Acer Predator is a product dedicated to PC gaming. This includes two laptop series – Helios and Triton. Laptops under the two series have high-end specs, competitive GPUs, advanced cooling, WASD keys, RGB lighting, and so on. As far as the difference goes, the Helios focuses only on power while the Triton is positioned as a sleek but powerful gaming machine. As one would imagine, the price of Acer Predator series laptops in Nepal ranks among the highest in Acer’s entire lineup.

So, that concludes our updated list of all the models of Acer laptops available in Nepal and their official price. The company’s Nitro series is really popular among Nepali gamers because of its affordable price tag. On the other hand, lineups like Helios and Triton from Acer are for those who want a premium gaming laptop.

And for the non-gaming crowd out there, Acer’s budget Aspire and Swift series offers plenty of power and impressive battery endurance in a relatively lightweight form factor. So, these are most well suited for students, business professionals, and a similar category of users.