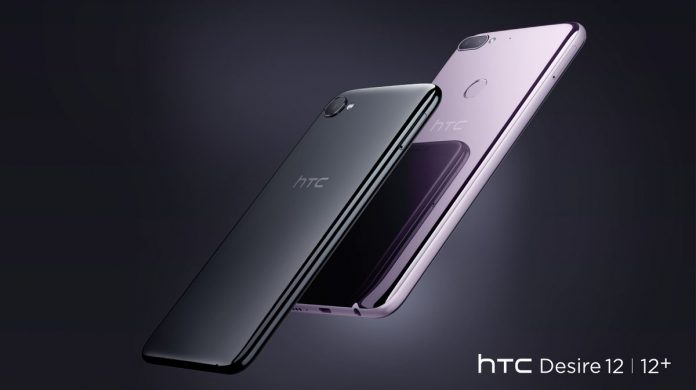 HTC Desire lineup has been popular for its unique design language and playful shell colors. These phones always used to have something different in them which made them desirable compared to the rest. This time HTC has announced the Desire 12 and 12 Plus that packs a ceramic glass back with a glossy finish similar to that of the HTC U11. The Desire 12 is the small phone among the two with the display size of 5.5-inches. It comes with the tall 18:9 ratio with HD+ resolution (720×1440). With minimal bezels on the top and the bottom, the device sure looks appealing. MediaTek MT6739 chipset – an upgrade over the popular MT6737 powers this device coupled with either 2 or 3GB of RAM. Also, the storage option includes 16GB and 32GB depending on your preference of RAM. But fortunately, the storage is expandable up to 2TB. The device is powered by Android 8.0 Oreo with Sense UI on top.

Diving into the camera, the Desire 12 sports a single 13MP camera on the back and 5MP front-facing camera on the front. The camera specifications of both the phones haven’t been announced. Backing it up is a 2730mAh battery. HTC Desire 12+ comes with a slightly large 6-inch display with 18:9 aspect ratio and same resolution as the small Desire 12. But the display is not the only significant upgrade on the plus mode. The phone also carries a pair of 13MP + 2MP rear camera where the secondary camera is for depth sensing to create the bokeh effect.

HTC was one of the first smartphone brands to introduce the concept of dual cameras with the launch of HTC One M8 back in 2014. Up front, there’s an 8MP camera. The device is powered by Snapdragon 450 chipset coupled with 3GB of RAM and 32GB of storage. It is expandable up to 2TB as well. It is running on Android 8.0 Oreo with HTC Sense UI on top. The best design element of both these phones is the use of ceramic glass which was used in HTC U11. It is packing a 2965mAh battery for backup.

Although these phones have been unveiled the availability and the price is yet to be disclosed. Looking at the history of HTC they’ll definitely price higher than the other mid-rangers out there on the market.