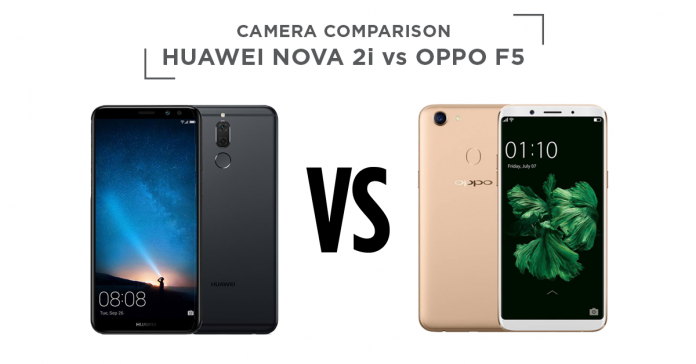 It won’t be wrong to say that 2017 was a great year for mid-range smartphones here in Nepal. We got to see some pretty great devices in a price that fit everyone’s pockets. Even though 2017 has come to an end, the battle of the mid-range devices still prevails. And today we are here to compare two of the most popular devices of last year – the Huawei Nova 2i and the Oppo F5.

The Huawei Nova 2i boasts four cameras in total – two at the back and two at the front. Huawei claims that it is the first smartphone to manage this feat and we did indeed put the device to our test.

Oppo, on the other hand, has touted its camera to “capture the real you”, and, on paper, its camera department looks very strong, equipping a 16-megapixel rear camera and a 20-megapixel front camera. The Chinese manufacturer has embedded the selfie camera with Artificial Intelligence which, according to Oppo, can beautify a selfie perfectly regardless of a user’s age or sex.

Well, the manufacturers sure have concentrated a lot in the camera department of their respective smartphones, but which one of the two really stands out? We tested both the devices for quite some time, and here is our final verdict.

Let’s start with something both the devices shine in – taking pictures under bright light. Now you might have noticed a warmer tone in the picture taken by the Huawei Nova 2i. This is clearly seen in the picture above. Even with a slightly warmer tone, the pictures look good as the color tone of the whole picture is natural. The Oppo F5, on the other hand, takes pictures with a pinkish tint. Now the pink shade helps capture red, pink or orange colors quite effectively but if green, blue or any other colors are taken into consideration, the hue is quite unnatural and slightly disoriented. So, the color reproduction is much better on the Huawei Nova 2i in real-life.

Since the Huawei Nova 2i overexposes the images, it was really hard for us to determine the contrast level of the device. Oppo, too, couldn’t quite pop the contrast in this image. And it is evident that the pinkish tint has shifted the colors in the image to what seems like unnatural in the Oppo F5.

The plus point the Nova 2i has over the F5 is its ability to capture images with a shallow depth of field. The Oppo F5 come engraved with a single camera lens against the dual camera setup on the 2i. The dual 13MP and 2MP lenses can intelligently determine where it needs to edge out the background blur. This is something that the Oppo F5 completely misses out on.

What the Oppo F5 has really cashed in on is the selfie shooter of the device. Its front houses a 20-megapixel selfie shooter which, like I mentioned before, has AI inside. So, I put that to the test and the first thing I noticed in the picture is that I lost the mole on my forehead. This is a strange thing to see as the AI here has tried to beautify the selfie so much that it has completely gone out of hand.

The Huawei Nova 2i’s dual front-facing cameras, on the other hand, takes bokeh pictures just like their companions on the back. Now I am not saying that the Oppo F5’s selfie shooter is bad, it takes better pictures than the front camera setup of the other device under well-lit environment. But the excessive beautifying of the images is certainly a turn-off.

Now taking pictures in dark environment is always tricky, only a few devices can claim to be the perfect night-time companion right now. On our test, the pictures taken from OPPO F5 seemed better as the colors looked vibrant and appealing in the above picture. However, the colors were unnatural and the pinkish tint has enhanced the shades of red color, which are dominating in the above image. The Nova 2i’s image, on the other hand, seemed slightly washed out. But in reality, the colors are quite natural and a little shift in the color is because of the prevalent warmer tone. Noise level is pretty much the same on both devices.

Under similar settings, taking pictures from the front-camera of the Oppo F5 was pleasing to the eye as it tries to make the images more detailed without increasing the grains. Huawei, meanwhile, tried to remove the grains by increasing the noise in the selfies under dark conditions. Also, the lights in the background look different than they did in normal life in the picture taken from the 2i. So, the Oppo F5 does better while taking selfies in such conditions as compared to the Huawei Nova 2i.

So, which smartphone should you choose if you are in the market for a camera smartphone? Well, that depends. If you are into selfies, maybe you should buy the Oppo F5. You should tolerate the occasion obliteration of moles, scars, and acne in the selfies. And another compromise you should make with the device is its average rear camera. The rear camera fails to depict the details like the way Nova 2i does. The pink tint and resulting disorientation of color and the inefficient HDR mode would be another downside with the device.

But if you want to up your photography game, go for the Huawei Nova 2i. Although it tends to overexpose images at times, the device certainly takes better real-life pictures. Amount of details in images is simply mind-blowing with the device even in the low light and how could one miss the fancy portrait selfies? The pleasing Bokeh shots from the rear camera and good amount of color saturation is another remarkable feature of the device. The inefficient HDR mode may be repellent at times but rest of the features are really praiseworthy that’s why it is one of the best mid-range camera smartphones in Nepal.