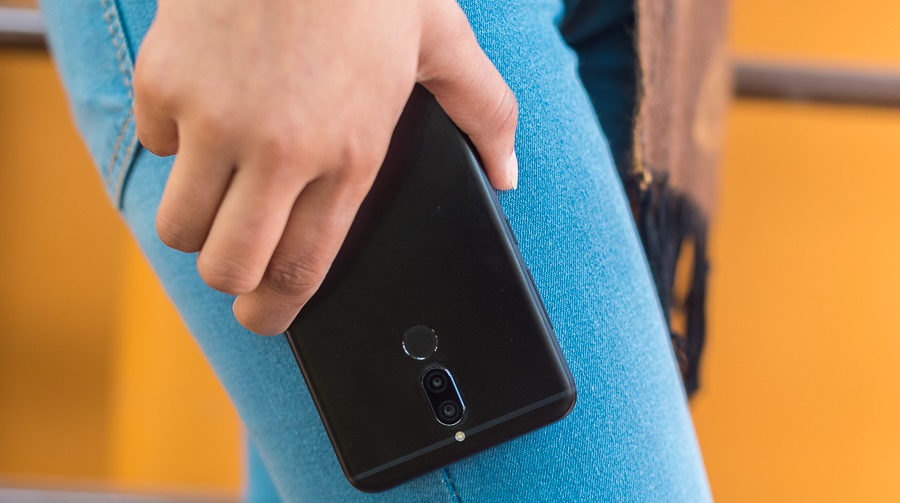 Huawei Nova 2i is a significant departure from the company’s usual approach. The phone is known by many names like the Huawei Honor 9i and Maigmang 6 along with being called Huawei Nova 2i. It is Huawei’s first phone that has not one, not two but four cameras. This is also the first time that the company is introducing an almost bezel-less display and a set of four cameras. It looks somewhat similar to Huawei P10 Plus but simpler and more subtle. The Huawei Nova 2i is a beauty at sight. The screen isn’t the only thing that is interesting about this device. There is a collection of four cameras specializing in producing good quality Bokeh effects on both, front and back.

The phone has recently been launched in Nepal for a competitive price of Rs. 33,900. While the specifications look good in writing, let’s find out what the reality is.

Here is a quick look at the specifications:

If tall designs and bezel-less displays catch your eye, the Huawei Nova 2i is your device. When you take the phone in your hands you can’t help but fall in love with the curvy edges. It comes with an all-metal unibody design which is an excellent material choice from Huawei. The metal body feels sturdier and more premium compared to Oppo F5 and Vivo V7 — Both these devices come with a plastic body. It measures 156.2×75.2×7.5mm with a weight of 164 grams, which makes it quite light for a phone of that size.

While I tested the black variant, it looked gorgeous but was a fingerprint magnet. Just a slight touch and your prints are all over the phone. I had a hard time cleaning it every now and then. Another complaint I have with it I that it’s too slippery and when I say too slippery I mean very very slippery. If you are not careful while holding it, there is a fair chance of gravity acting very strongly on it. 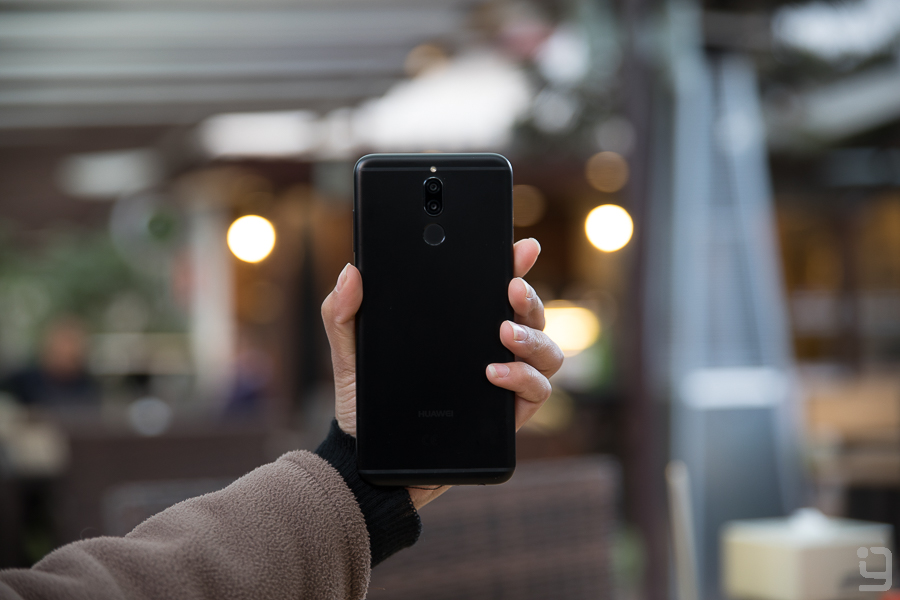 The Nova 2i also has a slim profile despite the huge 5.9-inch display protected by a 2.5D curved glass. The size of the phone is still manageable considering the size of the phone, thanks to the 18:9 aspect ratio. For a mid-range device to have an all view display is worth it. The matte finish gives it a classic look. The 5.9 inch IPS LCD display has a screen resolution of 2160×1080 pixels with a pixel density of 409ppi. I have thoroughly enjoyed playing games and watching videos on the big, bezel-less screen. The huge display, however, makes it difficult for one hand usage. There is a one hand usage option but I didn’t like using it. 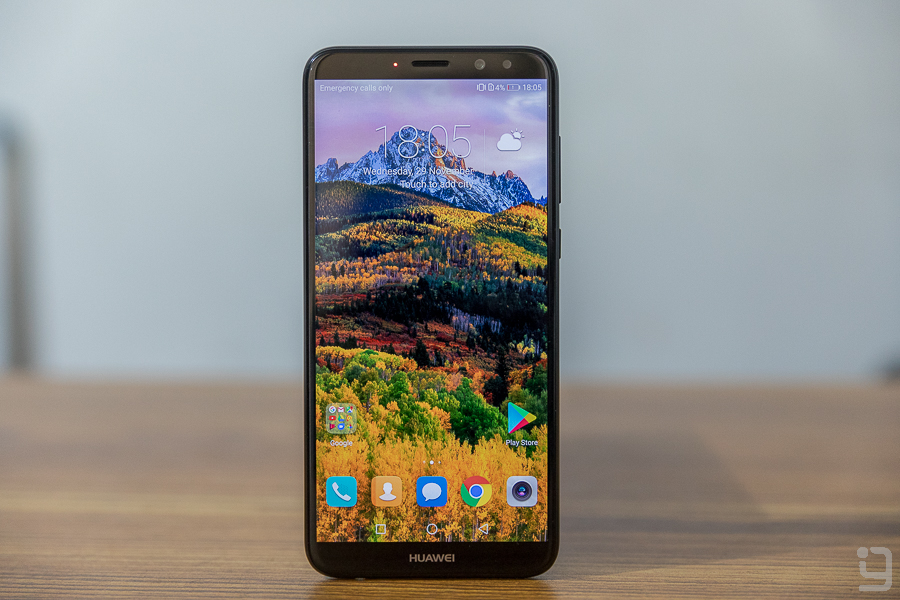 The display is sharp and crisp, thanks to the IPS panel. The viewing angles are good enough. It does not show odd color tones as the whites are balanced and there is also an eye comfort option which makes the display soothing for the eye. For indoor use, the phone’s brightness is good but under extreme sunlight, visibility is slightly lower. The power button and the volume control buttons are on the right side. On top is the noise canceling mic and on the bottom, there are the 3.5 mm audio jack, the loudspeakers and the micro USB port along with a primary microphone. The fingerprint sensor is at the back and in swift in functioning. The placement of the fingerprint sensor is quite good and easily reachable. The camera is what makes that Huawei Nove 2i so attractive. It sports four cameras altogether. Up front, it sports a pair of 13MP+2MP  selfie shooter and at the back, it carries a brace of 16MP+2 MP f/2.2 cameras both specialized for capturing the depth of information and shooting portraits with the Bokeh effect.

It has a list of camera features, namely, document scan (helps you shift focus to your documents), audio note (helps you add an audio note to your photos) and slow-mo feature along with features like HDR, filters, time- lapse, pro photo and video mode (lets you choose between parameters like ISO, shutter speed, exposure, focus and white balance), panorama, light painting and the night shot mode. The pro photo mode lets you choose between auto and manual focus just like what you can do in your DSLR. Similarly, you can choose what resolution you want to take your pictures in and also you have an option of choosing whether you want the pictures to be in raw format.

The rear camera is equipped with 16 MP (RGB sensor) of main camera and 2 MP (RGB sensor used for Accurate field depth information of secondary camera. The images taken from this device are sharp, crisp, vivid and I must say praiseworthy. The colors are well balanced and the pictures have a natural color tone. The Bokeh effect works quite properly blurring the background. I have checked whether both the cameras work for the Bokeh by covering the secondary camera, and I was thoroughly impressed to see that the end result is the effort of both primary and secondary camera. The blur can be adjusted as per your likes after you have taken the pictures. The back is equipped with LED flash and there is also a soft flash at the front for selfies, which is great for selfies in low light conditions.

The main 13- megapixel camera shoots the selfie whereas secondary 2MP camera captures the astonishing depth of field data. The Huawei Nova 2i automatically adjusts the level of brightness, switching between two levels (5 lux and 9 lux) to meet the lighting demands of selfies in almost any setting.

The selfie toning light is equipped with Artistic Butterfly Lighting Effect. This lighting is characterized by the butterfly-shaped shadow that it casts below the nose but is at its best on lean subjects with high and pronounced cheekbones. The low light camera performance is at par.

On the downside, videos are only recorded at 1080 pixels with both rear and front-facing camera, so no 4k videos, however, the video quality is good enough. I mean the colors are well balanced but had there been stabilization and a greater resolution option, it would have been better.

The one thing I am not satisfied with regards to the Bokeh is that it takes some time for the image to process. The images look sharp after taking it and have good details both at night and daylight.

The Huawei Nova 2i runs on Android Nougat 7.0 coupled with EMUI 5.1. It comes with a package of 4GB of RAM and 64GB of onboard storage that can further be extended up to 256GB. Similarly, it uses HiSilicon Kirin 659 Octa-core (4×2.36 GHz Cortex A53 & 4×1.7 GHz Cortex A53) processor. The 4 GB RAM has not let me down when the question is about app switching or app opening. These activities are swift as they should be.

Talking about my gaming experience, I have not played high-end games on this device but have played games like Into the dead and Beat racer and they ran with minor lags. What I can certainly say is that this is not the device you would use to play high-end games because the GPU is simply not capable of handling such extremes. However, as claimed by the company, the Huawei Nova 2i is confirmed and designed to running smoothly even after 18 months of use. We will have to see about that.

The new EMUI on this device has lots of interesting features like taking screenshots by knocking twice on the screen, drawing with your knuckles to record screen, customizing notification bar, changing the position of navigation keys, smart assistance, eye comfort feature, among the others. I have had the time of my life showing these features off to other people, who seemed pretty awed. There is also an option to adjust apps to the 18:9 aspect ratio. However, all the apps do not fit in the tall display. The phone does not suffer heating issues, which I think is pretty impressive. It also comes with a lot of custom apps like hiGame and Huawei Health that may take up space on your device.

There were, however, no updates on latest android I received while using the phone. Huawei has promised an android Oreo update soon so, minor lags in performance are hoped to be solved. Again this is not a promise! Up until now, for the time I have used this device, it has performed quite well.

The Huawei Nova 2i is backed by 3340 built-in lithium battery. While using it on a full charge it gave me an entire day of usage. It gave me around 9 hours of time while continuously using it for watching movies and playing games. On average, it has 5 hours of onscreen time which is good, but not great. There are various power saving modes available that shut down background processes aggressively. The phone does not support fast charging and lacks USB type-C which in 2017 may be a letdown for some users. Similarly, the Huawei Nova 2i has given me a hard time by taking up more than 3 hours to get fully charged with its charger. The battery, I would say is comparatively average for such a big phone.

The Huawei Nova 2i is clearly a very interesting phone considering how it is has stood out in comparison to other mid-range phones in regards to the camera, display, and UI features. I think the device is a worth it mid-range device for the ones looking for good set of cameras and a beautiful display in this price range.

However, I stick to the fact that the battery life and overall performance could have been better when put in comparison to competitors like Xiaomi Mi A1 and Oppo F5. For the ones who are not hardcore gamers like me, this device is worth considering. Like other things, features in a smartphone are a matter of priorities and if camera and display are yours, you can go for the Huawei Nova 2i.