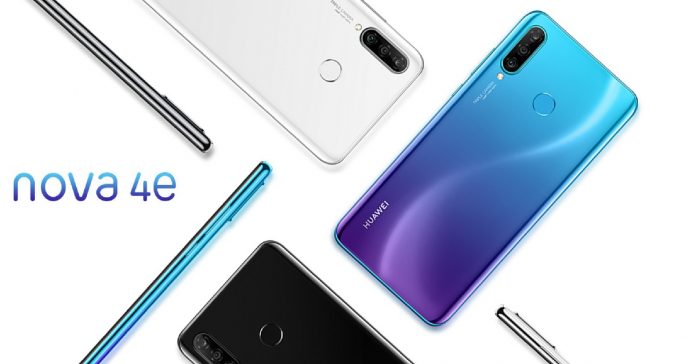 It has been a while the Chinese smartphone giant has released Huawei Nova 4. It was Huawei’s first phone with a hole punch display. The smartphone was brought at a midrange price point. However, the phone had a flagship chipset on the board, triple rear cameras and the fancy feature like the hole punch display. So it created quite a buzz in the smartphone market back then. And this time, the smartphone maker has presented a toned down version of the device. Dubbed as Huawei Nova 4e, the newbie also embraces triple rear cameras.

On the display side, the Nova 4 features a 6.15-inch IPS panel enriched with Full-HD+ resolution. But unlike its bigger sibling, the newbie comes with a notch on the notch. The notch is really tiny and less obtrusive, unlike others.

As discussed earlier, the phone flaunts three cameras on its rear panel. The primary one embraces a 24MP sensor, which is accompanied by an 8MP ultra-wide-angle lens and a 2MP depth sensor. The ultra-wide-angle camera stretches the field of view to 120-degrees due to which users can fit everything in the frame, which a normal human eye can see. On the front lies a 32MP selfie shooter, which rests on that minuscule notch, which I mentioned earlier. Performance wise, the phone gets the HiSilicon Kirin 710 chipset paired with either 4GB or 6GB of RAM. In terms of storage, Huawei Nova 4e comes with 128GB of onboard memory. As far as the software is concerned, the phone boots on Android Pie out of the box with EMUI 9 on the top.

Heading to the battery, a 3340mAh non-removable battery keeps the phone running. Adopting the modern trend, the phone also comes with USB Type-C port keeping the 3.5mm headphone jack intact. And another praiseworthy part of the device is that it also supports an 18-watt fast charging.

The phone comes in three colors: Midnight Black, Pearl White, Gradient Blue. And all of these variants will go on sale in China starting from 21st of March. As far as the global availability of the device is concerned, the phone will be relaunched as Huawei P30 Lite and will hit the market starting from 26th of March.