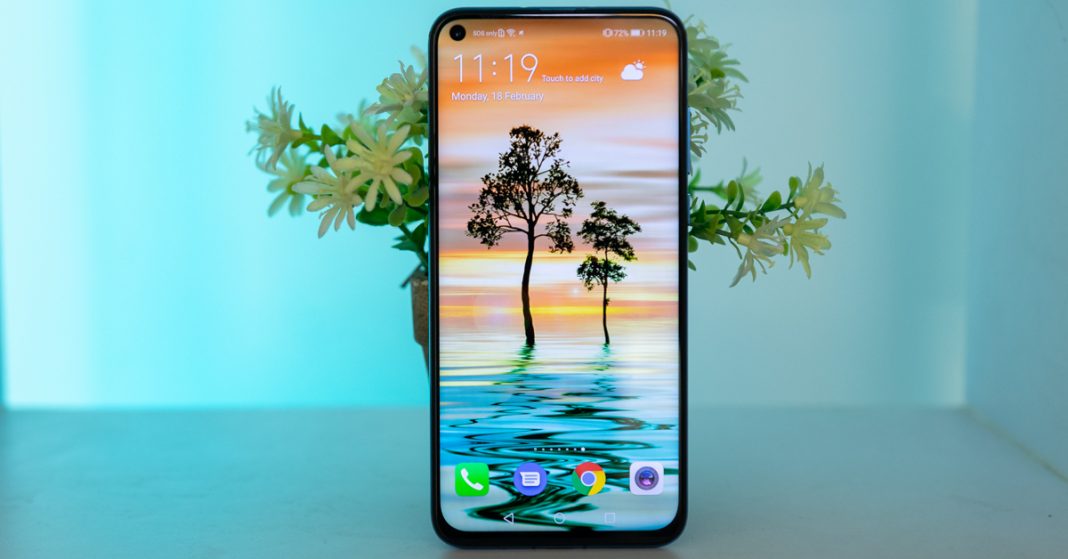 Notch or bezels. This single statement has brought in a lot of discussions in the tech world where half the people are okay with notches while half criticize them. Amidst all this, Huawei brought to us something called a punch hole, which is literally a hole in the display. So, what does the Nova 4 pack other than a piercing in the display? Let’s find out! 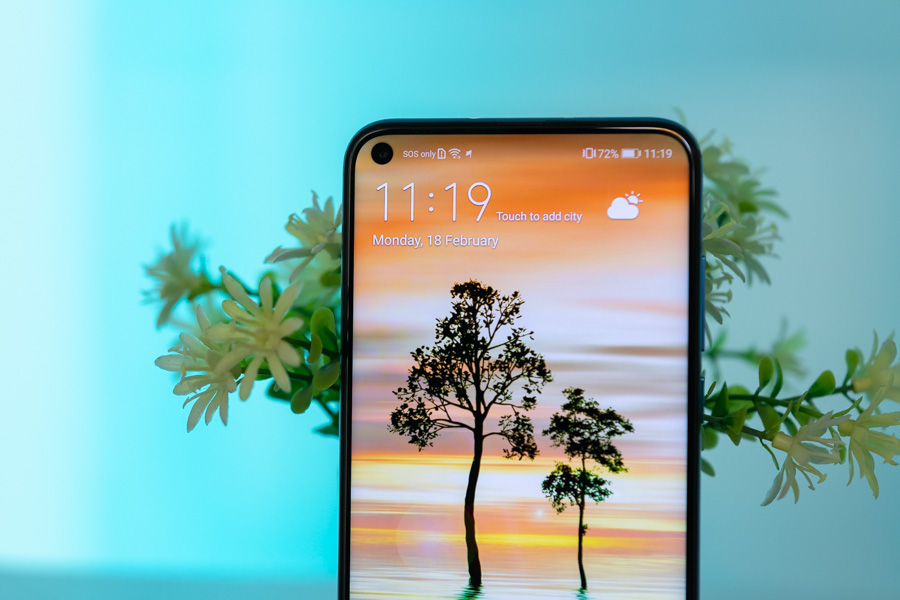 First things first, let’s talk about the elephant of the phone, the front camera located on the top left corner. Well, I had expected this hole to be a little smaller than it actually is and that’s because Huawei’s official images show a different story. Nonetheless, having used phones with bezels, and notches in the middle, the Nova 4 is definitely a breath of fresh air. For me, new things are always welcome!

And the punch hole does not look so bad. When I use the phone, I completely forget that there is this black circle on one of the sides of the phone. It’s like notches, you get used to it! Sadly, the whole point of a display like this is to eliminate bezel, which hasn’t been done completely. You still see a thick line on the bottom with bezels even on the sides and top.

But this solution to the notch problem definitely gets a thumbs up from me, I would definitely prefer a punch hole display over a water drop notch. And for those who are wondering, the camera is completely below the glass.

Up front lies a 6.4-inch IPS LCD display with a full HD+ resolution. On paper, its competitor, the OnePlus 6T, certainly has an advantage due to its AMOLED display, but in real life, I found the Nova 4’s display to be on par with the 6T. The IPS display is bright, vivid, and colorful. The touch responsivity is buttery smooth and the overall experience you get with this display is great. There is also a setting that lets you choose your personal display calibration, so you can make the display pop out like you want to. Now, going for the aesthetics, the Nova 4 gives the vibe of the P20 pro’s looks, but the back doesn’t look like glass to me, maybe it’s high-quality plastic. Having said that, it feels comfortable to hold and just goes along in your hands. The power button is located at the right position and is very tactile. The fingerprint sensor is also located just where I want it to be and its really fast like other Huawei phones. The volume buttons are located on the left, they are tactile and where you want them to be.

The Nova 4 is powered by last gen Kirin 970. We know how good the Kirin 970 is, we have seen it on the P20 Pro and the Nova 3. And it has never once let me down. Yes, when you compare it with the Snapdragon 845 powered Oneplus 6T, the benchmark tells a whole different story. But, real life performance is quite good, I mean it is not the 6T level, but the Kirin 970 is no slouch by any means.

I played low-end to high-end games, browsed through a lot of applications and web pages, went through a ton of videos, but it has done everything in an effective manner. The phone even handles PUBG at its high setting. And the fact that it is able to do that is a win in itself.

The Huawei Nova 4 only comes in a single RAM variant which is 8 GB DDR4X, so you don’t have to worry about software hiccups if you are willing to cash in on this phone.

On the software side of things, the Huawei Nova 4 runs on Android Pie with EMUI 9.0.1 on top. Like I mentioned before, you won’t be facing any issues as far as software is concerned. With the EMUI 9.0.1 update, Huawei has evolved and the optimization is top notch. I have noticed smoother performance than how it was before on Huawei devices. And even some of the Huawei users have agreed to that.

However, you have the same bloatware on the device which I have been complaining for a few years now. Huawei should get rid of these applications on phones sold outside of China at least. Even I, as a reviewer, have never really used those applications as I think they just take up the internal memory. And this is where the OxygenOS on the OnePlus 6T shines, it is free of bloatware, and is one of the cleanest versions of Android with quite a lot of tricks inside the box.

Having said that, the Nova 4 also has several customizations. If you are a business person and want to keep your personal and business life separate, there is the Private Space feature. Likewise, you have motion control that consists of various gestures. 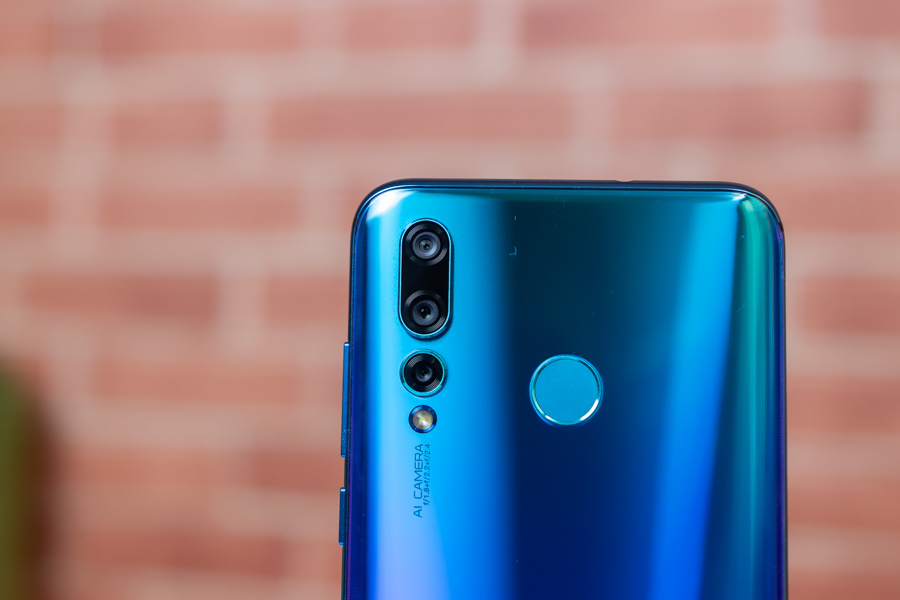 There are three cameras stationed on the rear side of the Huawei Nova 4 that work for a various purpose. The Nova 4 I reviewed comes with a 20mp primary camera, a 2mp depth sensor while the other 16MP camera works as a wide-angle lens.

Okay, first let’s talk about the aspect where a lot of smartphones don’t shine, the night environment. Taking both the Nova 4 and OnePlus 6T out for a comparison, I took a few samples from both the phones and the first thing I noticed is that the 6T has a better-detailed image with a good balance of exposure. Now coming on to the night mode, well I need to mention that I don’t use its “default” nightscape feature the 6T has. I don’t like the images it produces so I just use the google camera port.

So comparing that against the Nova 4, I have to say that the quality of the samples you get will depend on the environment. In pitch dark, the samples are bad. But in presence of hits of sources of lighting, the Nova 4 does better work than the 6T. But the Nova 4 takes a lot of time to capture an image with night mode than the 6T does. 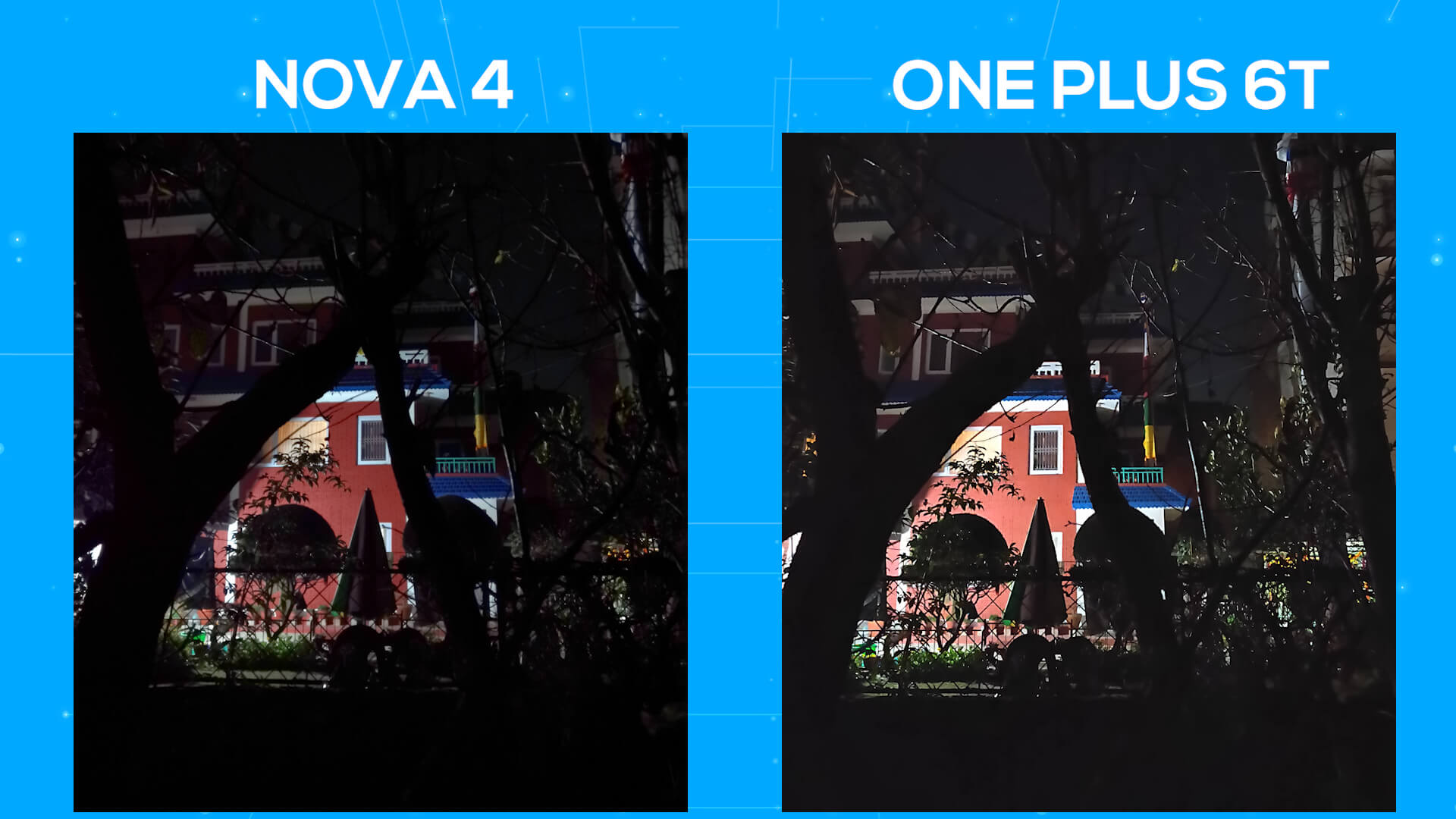 In the day time images, the details are a little better on the OnePlus 6T, and one thing I noticed with this same image is that the 6T has natural colors overall as the Nova 4 has tried to darken them. Even the dynamic range is portrayed well by the 6T as the shadow details pop out without exposing the highlight details. But there were a couple of times such as the second image where Nova 4 has done better work in handling the dynamic range.

And when I talk about exposure, I have to say that almost all Huawei smartphones overexpose the images at times and this phone here is no different. If saturation is considered, yes, the colors on the pictures from Nova 4 look like they pop out more, but if the colors are zoomed into, they are unnatural. 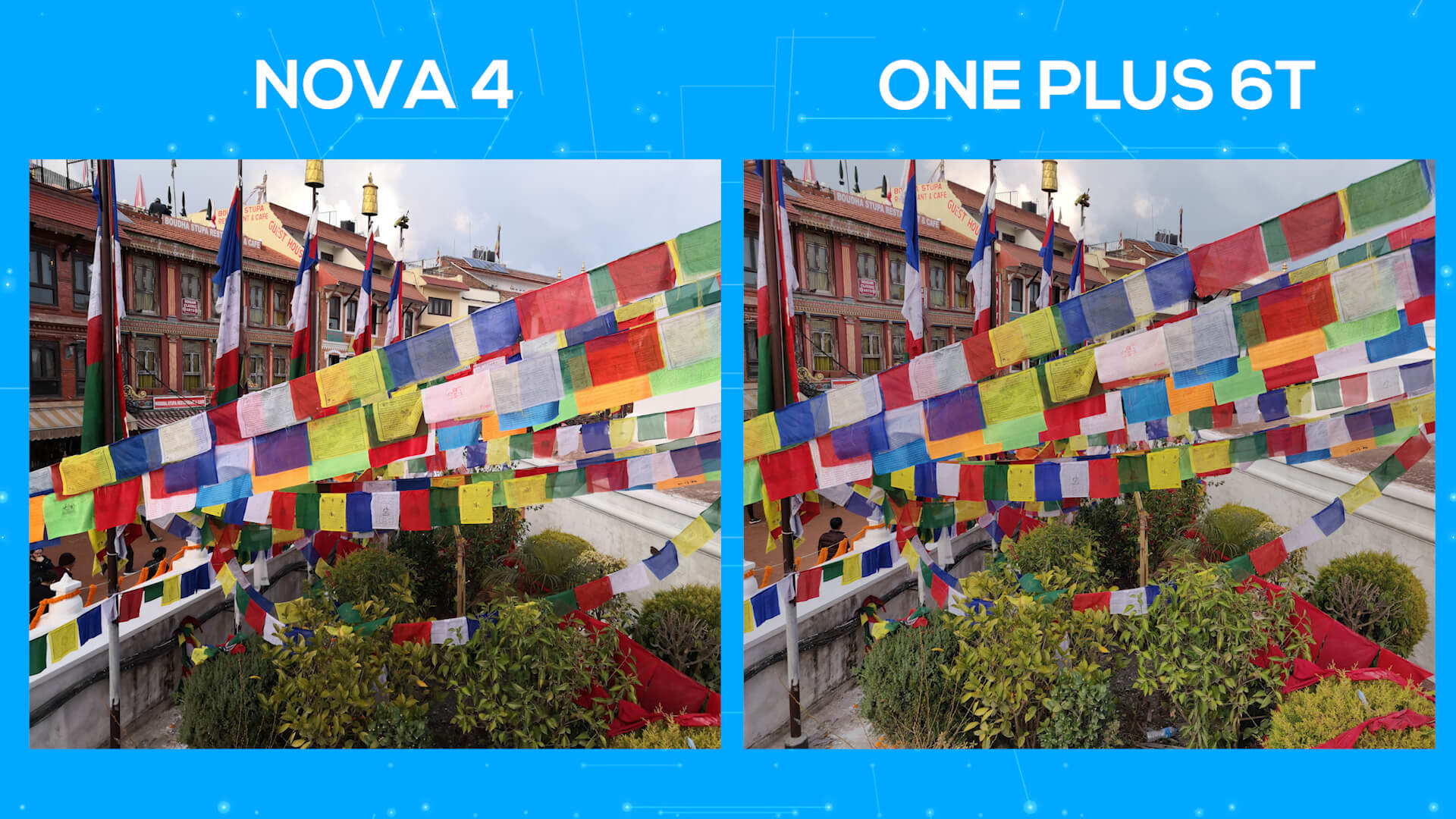 The portrait is where both the devices do equally well, they have blurred out the necessary parts of the background and the subject has popped out quite well. 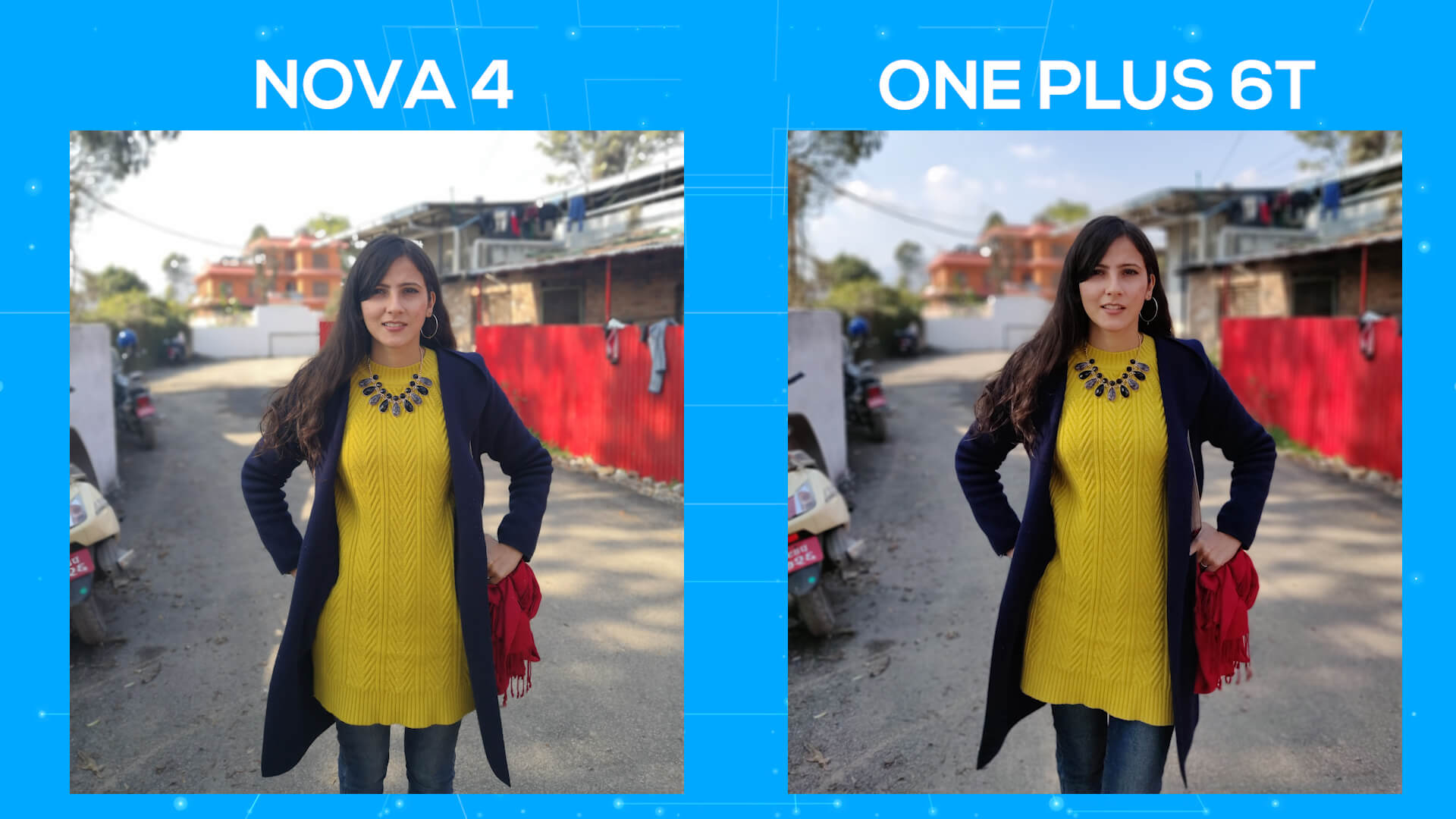 This feature has been very helpful for me, so I will certainly miss it when I revert back to my daily driver.

Now the selfie is where the Nova 4 does well. Take the two samples below as an example. My shirt’s color is red so you can definitely notice where OnePlus 6T has done a blunder. The colors on the image don’t match the actual one as my shirt has turned pink, and the color tone of the overall image is colder which looks unusual. The Nova 4 though, nails the coloring and color tone. Talking about the portrait selfies, both the Nova 4 and 6T are a hit and miss. You will notice that both the phones couldn’t identify my ear as the subject. The Nova 4 also has the lighting effect which can be applied to selfies, but I didn’t quite like it. 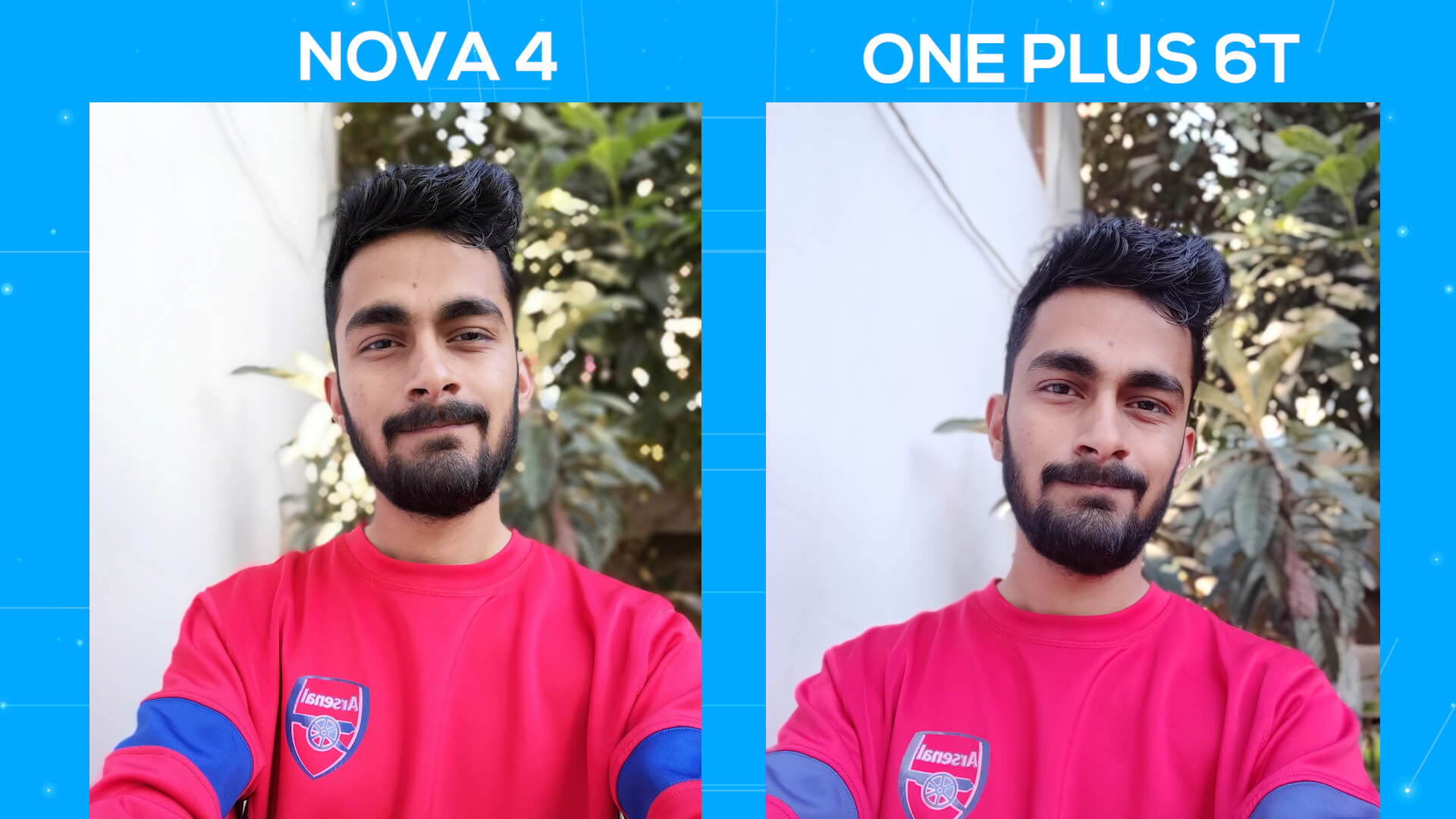 And even though the Nova 4 does well on the selfie front, it fares badly in video quality. The videos are just too shaky, and the colors are quite dull. Plus, it can only shoot 4K videos at 30 fps.

Extras really make phones standout these days, and even the phone companies have been excelling in this aspect.

So, let’s talk about the security options available on the device. The Huawei Nova 4 has both the fingerprint and face unlock feature. Both these options are snappy, and if it wasn’t for the unlocking animation, they would be as fast as the ones on the OnePlus 6T. In terms of storage, the Nova 4 is available in only one variant which is 128 GB. One thing the 6T and Nova 4 share is the lack of microSD card slot. There’s also IR Blaster for the husband who can’t take control of the TV’s remote.

The earpiece on this device is in an unusual position at the extreme top. It did take me some time to get used to it as my traditional call position, if you call it, made the volume slightest bit lower. But there was no issue in the call quality whatsoever.

Huawei has also included an LED notification light sensor which you don’t see in phones ditching the traditional notch. And even though the light is in a weird position at the top, it still does the job for me.

And I think I forgot to mention this, the Nova 4 has a huge, huge, huge advantage over the OnePlus 6T, and yes, you guessed it right, it’s the headphone jack. Even though the jack is in the wrong place for me as it’s on the top, I have loved using my wired headphone on it. 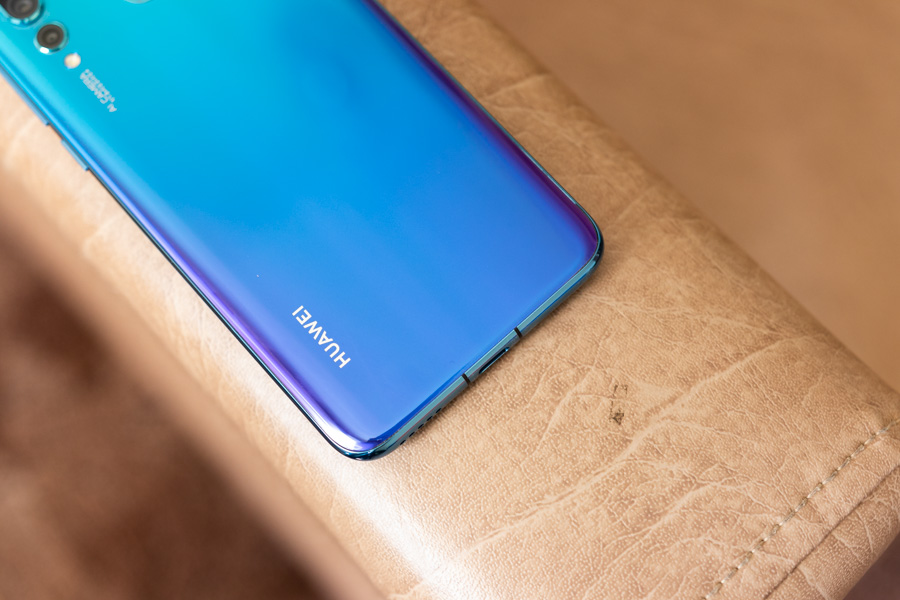 There is a 3750mAh battery inside this device. In my heavy usage, the Nova 4 gave me a screen-on-time of around 5 hours 30 minutes to 6 hours which will definitely increase for a normal user.

Plus, there is an option here that lets users lower the screen resolution which, again, helps preserve battery. The OnePlus 6T also has a somewhat similar battery life, but the difference lies in the charging speed as OnePlus’ proprietary fast charging charges the 6T faster than Huawei’s 18-watt charger.

The Nova 4 is a decent phone no doubt, and it is facing stern competition from a lot of other devices, with the “mighty” OnePlus 6T being one of those. The effort Huawei has put into this smartphone here is quite commendable. The Nova 4 is a handy phone that looks quite good, it has top-notch internals including the wide-angle lens.

However, the pricing it comes with is similar to the 6T, which makes it the direct competitor as I mentioned before. Now I really like the Nova 4, but I still think the 6T takes the crown here due to the better camera, more-premium ness if that’s even a word, and just for the overall performance and usability.

However, the Nova 4 is 5,000 cheaper in Nepal and if you are looking for a phone with a wide angle lens over a telephoto lens and a better selfie camera, the Nova 4 is still a good choice.