Home Huawei Huawei set to launch the Nova 4e with a 32 MP selfie... 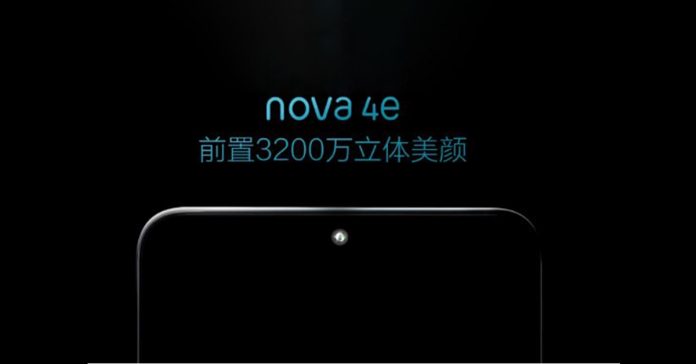 Huawei has just teased the launch of its new smartphone that will be named the Huawei Nova 4e. The Chinese company took to Weibo to announce its plans to launch the new device through a short video. The video basically outlines the top lining of the phone with a focus towards the center. There will be a camera on the center of the phone, unlike the Huawei Nova 4 which has a camera cutout on the left side of the screen.

The Huawei Nova 4e will be a member of the Nova 4 series, rather than its direct successor. It is rumored to be a cheaper sibling with a few cut downs on the features to meet its price point.

The teaser video also reveals the Huawei Nova 4e to feature a 32-megapixel selfie camera. This camera will probably sit on a water drop notch up front.

Huawei hasn’t really revealed much about the Nova 4e. However, we can expect it to make way into the international market soon. Like I mentioned before, this new device will be a little cheaper than the Nova 4.

Rumors circulating on the internet suggest the Huawei Nova 4e to feature triple cameras on the back, just like the Nova 3 along with a 3,240 mAh battery. The device will supposedly be powered by the Kirin 710 chipset. Some rumors also suggest that this Nova 4e is the P30 Lite.

Huawei launched the Nova 4 a few months ago. The phone features the HiSilicon Kirin 970 chipset along with 8 GB of RAM. The two secondary lenses on its triple camera setup work as a depth sensor and as an ultra-wide angle camera. There is a 25-megapixel front-facing shooter on the device.

The Huawei Nova 4 has a 3,750 mAh battery that is lighting up a 6.4-inch screen with a punch hole display. It is currently available in Nepal for the price of Rs. 64,900.